RAIL's Insider column this edition considers the missed opportunity by Train Operating Companies (TOCs) for Boxing Day operation. The argument initially forwarded claims that, unlike Boxing Days twenty years ago, there is a desire to travel today, mainly to shopping outlets and airports.

Megabus operated its core network of services on Christmas Day recently, and, as ever, saw operation on Boxing Day and New Year's Day. Some smaller bus companies are getting in on the Christmas Day act, too, with Southern Vectis running Christmas Day services for the past two Christmases on the Isle of Wight.

The operation of buses and trains on Christmas Day is one issue - the shops aren't open and airports see very little activity at all - Boxing Day is another. During British Railway tenure, Boxing Day trains ran for many years, though were cut due for falling demand. Although this is clearly not the case today, should one of only two days without trains operating be sacrificed just so people can queue outside Next for three hours?

For Stagecoach to operate Megabus on Boxing Day will cost proportionately far less than TOCs to run a splattering of their trains. Network Rail possessions often take place over Christmas as this represents an efficient and therefore cost-effective manner to renew old track and upgrade signalling. Liverpool Street in London closed over the Christmas period again this year, so even if National Express East Anglia had wanted to run Boxing Day trains, it wouldn't have been able to do so. By contrast, the Highways Agency doesn't close the M1 and M6 or even the M25 over the Christmas period, so bus and coach operators benefit here. 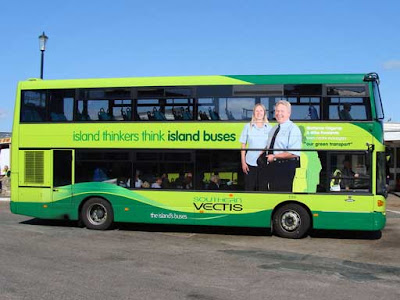 No rail possessions or motorway closures on the Isle of Wight has seen buses run over the Christmas period here without disruption.
An operator in the LEYTR area told us recently that they are regularly approached by a particular conurbation's shopping centre to run buses there on Boxing Day. They always decline, which sparks said shopping centre to offer them an 'almost head-turning sum of money' to change their mind. They never do - yet - citing Boxing Day as one of only three days that their buses do not run and all their drivers spend time at home with their families.

A missed opportunity on their part perhaps, since they were likely to be offered money to help break even or perhaps be pushed into the black, but many run over Christmas with no subsidy at all. The Isle of Wight isn't immediately the place you'd expect to have a 365-day-a-year bus service, but since 2008 it has. An insular society such as this is effectively cut-off for two days and with a high percentage of elderly residents, the desire to travel to see friends and family (as opposed to retail therapy) saw Southern Vectis give some Christmas Day buses a go. In 2008 they almost broke even; in 2009 all services on the island ran and we eagerly await details of whether they comfortably made a profit.

One argument is that trains run on New Year's Day, so would it really be so wrong to run them on Boxing Day? After all, they're both standard public holidays with neither having a direct baring on the Christian calendar. And if we were such a strong Christian country, we'd treat Good Friday and Easter Sunday in the same way as we do Christmas Day.

I recently came accross your blog and have been reading along. I thought I would leave my first comment. I dont know what to say except that I have enjoyed reading. Nice blog. I will keep visiting this blog very often.