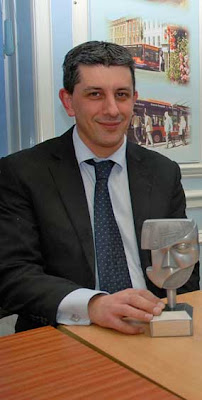 Forget that their vehicle livery curves in the same manner as the 'really good bus company's' and that they have a virtual monopoly in their hinterland, Isle of Wight (IoW)-based Southern Vectis (SV) has come up with what must truly be the most innovative scheme to both generate new patronage and remove cars from its road network.

The idea is simple: scrap your old car and receive a free bus pass for unlimited SV bus travel on the IoW for one year, equating to a saving of £720.

To ensure the person being liberated from their car holds up their side of the bargain, SV will scrap their motor vehicle on their behalf. The scheme's brain-child Marc Morgan Huws presumably allowed Best Impressions to come up with the scheme's name: The Really Green Car Scrappage Scheme - sure to anger those at Langley Mill should they choose to do something similar!

Joshing aside, the scheme is superb. Unlike the government's short-lived car scrappage scheme, which merely replaced old for new, SV's sees cars removed from the road while at the same time the company assures itself increased ridership by people who would perhaps not have considered the switch. SV scrap the car and net themselves the nominal fee paid, while losing the cost of an annual bus pass in their system. Issuing a £720 annual ticket is simply a piece of paper that merely needs noting on the balance sheet; importantly it is not a reduction of £720 from last year's net profit.

The Really Green Car Scrappage Scheme kicked off on 15 October and through high-profile adverts throughout the IoW those with a second car appear to be taking the bait, beating SV's own expectations. Did they need much persuasion though, since a recession tends to see families reduce their car ownership? Could it be the scheme acknowledges this and was there to ensure that once the car is crushed, its owner is thrust a free travel pass for SV's services before they have chance to think about alternative travel options?

I've been attempting to identify ways in which the scheme could be used for the wrong reasons and can only think of on:
SV insist that the car has a MOT and that the bus pass is issued to the registered owner of the vehicle. While the latter can be gotten round through simply notifying the DVLA of a change of ownership, how many would bother? The car needs to be driveable, which would stop an illegal banger from the mainland being brought onto the Island to qualify. The car also needs to have been in its owner's possession for at least six months. Further details here.

An excellent scheme and one that other operators will surely follow.

ummm, how many people have actually done this then?

Surely the outlay is what it's all about. £2k off a new car that costs £15k means the outlay is £13k, compared to nothing for the year's bus pass? Moreover, you're effectively given free travel worth £720.

That's how I read it.

You actually make it seem so easy with your presentation but I find this topic to be really something which I think I would never understand. It seems too complicated and extremely broad for me. I’m looking forward to your next post, I will try to get the hang of it!
cash for cars gympie
cash for scrap cars gympie