Deregulation in the 1980s saw South Yorkshire become known as The People's Republic of South Yorkshire on account of the incredibly low fares policy and service density that existed in the metropolitain boroughs of Sheffield, Rotherham and Doncaster - residents therein had bus services the envy of the country in many ways. However, in 1985 South Yorkshire PTE re-named its bus operation South Yorkshire Transport (SYT) in readiness for deregulation, and much was about to change.

Still council-run, the 1990s dawned and so too did a new name: Mainline. Initially the name was used to identify the core trunk routes the company operated but in 1992 the name was extended to all buses. The following year, the company was sold to its workforce and a year later Stagecoach purchased a 20% share. 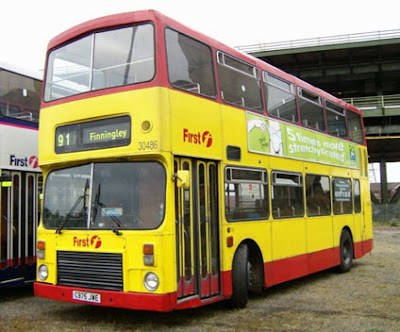 Seen in 2005 at the Meadowhall Bus Rally is this Dennis Dominator in Mainline's red/yellow livery, though with First logos. The following year, all of this type - which once totalled over 300 - were withdrawn from the fleet.
1994 was also the year in which Stagecoach got into trouble in Darlington and so it wasn't long before the then-named Monopolies & Mergers Commission (MMC) ruled that Stagecoach had to divest its stake; as an aside, the MMC had also been looking at bus service developments in Sheffield, following a plethora of services bursting onto the city's streets, and weren't pleased that Stagecoach also owned nearby East Midland Motor Services, which ran numerous services into South Yorkshire, from its bases in Chesterfield and Worksop.

The 20% stake was snapped up by FirstBus, as the company was then known, and the company's chairman at the time, Trevor Smallwood - a local lad, who ironically used to work for competitor Yorkshire Traction - joined the Mainline board of directors. Mainline then operated until 1998 with First having a minority share. 13 July 1998 saw the company pass into First's hands completely, with the remainder of shares purchased. The new company name was First Mainline and the First logo started to appear immediately, though Mainline's red/yellow livery continued for many years to come.

In 2000 the company unveiled its bus equivalent to the iconic Underground philosophy: the Overground network. Initially, only a handful of routes in Sheffield were incorporated, with these being main trunk routes serving the city's busiest corridors. A network map based on that produced by Harry Beck for London Transport in 1931 was produced by cartographer FWT and attempted to show the Overground routes and how they connected at convenient interchange points to permit cross-city travel as easily as possible. Today, 27 routes in Sheffield form part of the Overground network there; Rotherham's network covers 15 routes and in Doncaster 21 routes operate under the Overground brand. 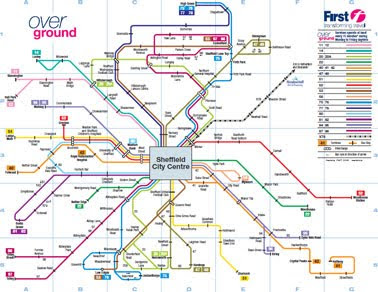 Sheffield's current Overground network - designed with the Tube Map in mind
The First Mainline name was dropped in favour of First South Yorkshire soon after, though it wasn't until 2006 that the lastmain batch of vehicles that dated back to the period of PTE-ownership were finally withdrawn - being the somewhat iconic Dennis Dominators, that had been stalwarts in South Yorkshire for decades. In 1998, the year the company purchased a majority shareholding in Mainline, the fleet it inherited comprised:

In 1998 a total of five depots were operated from, three in Sheffield (Greenland Road, Olive Grove & Halfway), one in Rotherham (Midland Road) and one in Doncaster (Leger Way).

In order to start to replace the fleet, the first large batch of new buses came in 1999 and was Volvo B10BLEs, which were joined by second-hand Volvo B7TLs from First Manchester. Further Volvo B7TLs joined the fleet until 2004, with the majority of everything acquired being allocated to Sheffield thus far. During 2006 cascaded Wrightbus Eclipse Gemini-bodied Volvo B7TLs came from London and joined newer step-entrance 'deckers, namely Northern Counties-bodied Volvo Olympians; it was this push that ultimately spelled the end of the line for the Dominators - the last day in service for this type was 26 July 2006.

2007 saw the largest investment First had made to date, with £6.4 million being spent on 38 new Volvo B9TL/Wrightbus Eclipse Geminis - 20 to replace older examples on the flagship Service X78 (Sheffield-Doncaster) and the remainder for local services in Doncaster for use on a new initiative fostered by South Yorkshire PTE: the Rossington-Woodlands Quality Bus Corridor. The following year an even bigger order was made, for 58 of the same type of 'decker for use in Sheffield on Services 47/48, 75/76.

To date, the only ex Mainline vehicles seen in regular service are a handful of Alexander PS-bodied Volvo B10Ms. The majority have either been sent to First Glasgow or been converted into training buses, though it's still not too uncommon to see one in service. 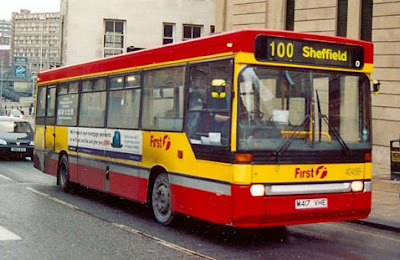 One of the last vehicles to remain in the Mainline livery is this Volvo B6/Plaxton Pointer, new to Mainline in 1995
In more recent time, things haven't been going too smoothly for First South Yorkshire. The company was lambasted in 2005 for raising fares on four separate occasions as well as cutting a large number of marginal services. First was having to deal with the requirement to perform as well as other companies in the UK but against a backdrop of an expectancy of low fares and unrivalled service coverage. Stagecoach purchased the Traction Group in December 2005 and with came a significant foothold into Sheffield, with Yorkshire Terrier - one of First's main competitors. Stagecoach re-branded this operation as Stagecoach Sheffield and has invested heavily in new low-floor vehicles, as well as integrated ticketing with Supertram (which it purchased in 1997 and has a concession to operate until 2024) and its existing bus network to the south of the city. First still have the monopoly on Sunday operation, with only two of Stagecoach Sheffield's services running on the Sabbath - which really isn't on!

For the past half-decade, strikes at First South Yorkshire have occurred roughly annually, generally over pay and conditions. Akin with the relatively cheap fares offered still in South Yorkshire, the Company has paid its workforce a slightly lesser hourly pay rate to its neighbouring operations in West Yorkshire and Manchester. Accordingly, its South Yorkshire employees would like pay parity with their colleagues down the road and with the close-knit working environment that is accustom with a workforce that once owned the entire business, it doesn't take much for drivers to 'down tools'.

The latest negotiations that caused strike action in Sheffield was for 2.5%, which was unanimously rejected; this was bettered to 3% with a free travel pass for one child, a £100 shopping voucher and a financial settlement over a dispute over acrewed holiday pay. Rotherham and Doncaster depots both accepted this second offer, though Sheffield didn't as another issue had arisen, this time a disciplinary matter erupted, causing Sheffield-based drivers to continue their strike action at the end of last month, though now all strike action has halted. It's Stagecoach's turn now. 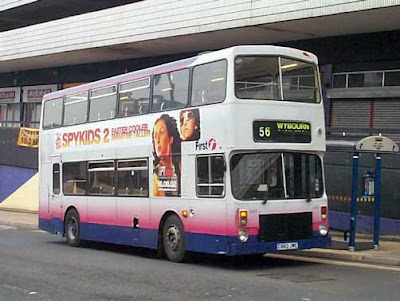 Some Dennis Dominators made it into First's 'Barbie' livery - seen here is one such example on Arudel Gate in Sheffield city centre.
From a passenger's perspective, travel in and around South Yorkshire with First remains competitively priced. Their day tickets for travel in the Sheffield/Rotherham/Doncaster areas is only £4, with a £4.50 ticket available for travel on any First South Yorkshire bus service (except into the Peak District). A Group ticket is also available, costing £8 for a family of up to 5 (max 2 adults). Weekly tickets cost £16 (Sheffield) and £15 (Rotherham/Doncaster), though certain Day/Week Savers are available on specific routes that work out at around £3 Day/£9 Week. South Yorkshire PTE also offer their TravelMaster range of tickets the offer unlimited travel on any bus, train or tram, though naturally cost a little more.

Once referred to The People's Republic of South Yorkshire, I think the area still boasts an excellent bus service coverage. Yes, fares have increased well above the rate of inflation and yes some marginal bus services have been cut, but compared to other cities in the UK and the ridiculous single fares offered by bus companies therein, Sheffield and indeed South Yorkshire as a whole is still a very affordable place to travel. (GL)