Opened in 1960, the small Devonian station in the settlement of Axminster is undergoing a mini face-lift. Work has started on the installation of a passing loop, at a cost of £20 million, that aims to provide a double section of track on the main Waterloo-Exeter line. Once completed, South West Trains (SWT) will be able to operate hourly services to Exeter St. Davids from London Waterloo.

As you'd expect, the work is being undertaken by Network Rail (NR) - about as nationalised as the new East Coast Railway Limited company - and has been sub-let to a private contractor, who I won't name (and shame).

Things looked grim for a time when NR's contractor built a new platform at Axminster station sixteen inches too close to the railway line, the obvious result of which does not need spelling out! Consequently, additional time and money have been spent demolishing the new structure and hurriedly re-building it a little further back, in time for the December timetable alterations, which is the planned start-date for SWT's enhanced train service. 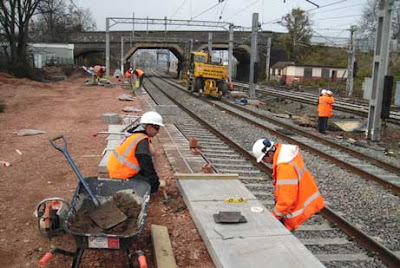 Ruler, anyone?
Understandably, NR didn't want to be drawn on the subject, and having wiped a small molecule of egg from her face, a spokesperson briefly admitted (very little!): The platform has been rebuilt, and this is not delaying the scheme. NR inspected the platform and found that it did not meet the guidelines set." (GWB)