A trip along the WCML with Virgin

It's a trip that's been in the planning over a year: an end-to-end trip on board a Virgin Trains Class 390 'Pendolino' from London Euston to Glasgow Central and return. Knowing last September that the West Coast Main Line £9 billion upgrade was due for completion anytime soon (in actuality this wasn't completely finished for another six months!), I'd been interested in one aspect of Virgin's Very High Frequency (VHF) timetable: the reduction in journey times.

The following is the introduction to a stand-alone article I've just finished writing up, which reviews the day I had on two of Virgin's trains while undertaking said trip. The article is archived on the LEYTRavels blog, which features all our stand-alone days out by public transport as well as epic jaunts such as our recent John o' Groats to Land's End trip. (GL)

I’ve wanted to travel on the West Coast Main Line ever since its £9 billion upgrade was finally completed, late and massively over-budget. What fascinated me the most was not so much the thrice hourly London Euston-Birmingham and London Euston-Manchester journeys Virgin Trains introduced as a result, but the end-to-end journey time between the two points furthest apart on their line: Euston and Glasgow Central. Typically, the time taken to travel between the two stations is now a shade over 4½ hours, though the best attained is the 1630 weekdays departure northbound, which calls at Preston only and manages the fastest-ever journey time of 4:10. This equates to an average speed of 96.3mph and from December comes down to four hours and 8 minutes.

Thanks to the nice people at Virgin Trains, I was recently given the opportunity to undertake a return trip between Euston and Glasgow, for the purposes of this blog. I opted to travel on trains that offered the Breakfast and Evening Meal menus. Having travelled for the first time aboard a Virgin Trains' Pendolino during the 2005 LEYTR Railrover with m’colleague, I was staggered to see that every item of food and drink is completely free of charge to those travelling first class. Having grown up on the other side of the country, where Great North Eastern Railway (GNER) and now National Express East Coast (NXEC) operated my Anglo-Scottish train service, the only gratuities those travelling in first class were afforded comprised biscuits, Pretzels, fruit, tea/coffee and bottled water. 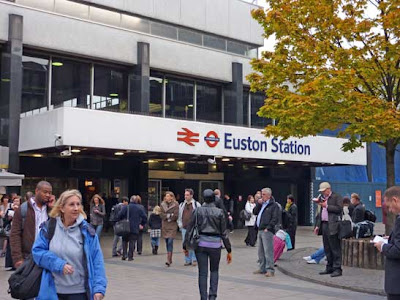 It's incredible to think that the London terminal shown here can be linked with Glasgow Central in just 4:10.
As a leisure traveller on Britain’s rail network, I am quite happy to travel the longer way round if it means I’ll enjoy my journey more. As I see it, for the additional money paid to travel first class, the more freebies you receive the better. If you live in Grantham and want to travel to Edinburgh on business, quite frankly my requirements won’t feature and you’ll consequently pay NXEC ’s fare for a direct train journey between the two places and simply appreciate what you’re offered for free while travelling in first class.

Of course gluttony was not my sole reason for undertaking this journey on Thursday 15 October. I’ve only travelled on a Pendolino twice: firstly a return trip between Euston-Manchester Piccadilly that formed part of our Railrover trip and secondly a single trip between Euston-Birmingham New Street in March 2008. I particularly enjoyed the ambiance within the first-class carriages, with their airline-style narrow windows and free radio channels. Bringing things up-to-date, free wi-fi is now offered to first-class passengers, so too are free papers on weekdays, along with the Breakfast and Evening Meal menus.