Yesterday saw a special bus rally to celebrate the UK's longest-running bus magazine reaching the ripe old age of 60. As incumbent editor Alan Millar eluded to in his editorial on the first page of the special commemorative November issue, BUSES has reached the age at which someone of the same vintage can travel free on local bus services in the country. It's quite an achievement.

To say reaching 60 won't have been in the minds of the initial editorial, headed by Charles Dunbar, is probably a little false; anyone starting a new publication wants it to exceed beyond their wildest dreams, and that for a number of reasons this has comes true for BUSES. Back in November 1949, BUSES started out as Buses Illustrated, costing one shilling and sixpence, or 7.5p. The first edition, dated November/December 1949, contained 36 pages, on which featured 47 black and white photos, 2 maps and 14 features. The November 2009 edition, on sale at the event, costs £3.95 and contains an un-representative 116 pages and in excess of 250 colour photos. 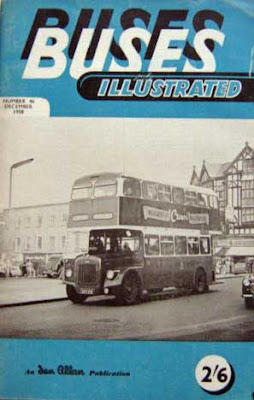 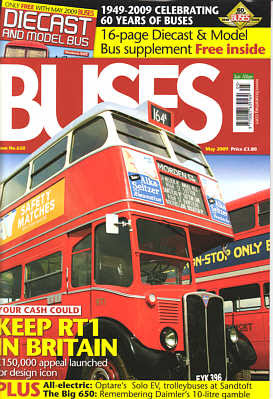 BUSES has had considerable success because it has no notable competition. There are trade magazines, though these feature less favourably with the bus enthusiast fraternity, carrying more technical information and specifications, not to mention lucrative advertisement pages. Smaller bus magazines for enthusiasts are produced and can be found on the shelves of larger WH Smith - Bus Fayre, for example. Then there are enthusiasts who prefer to take magazines produced in their local area for localised news and views, *coughs* The Lincolnshire & East Yorkshire Transport Review, for example. These smaller productions continue to flourish unabated - even during recessions. For example, the LEYTR membership has not dropped at all over the past year, despite the recession.

Very little competition undoubtedly helps BUSES survive. It's one of the more expensive monthly magazines for the number of pages contained, and ever since I've taken the mag, the price has always increased each and every January. Yet still the publication goes from strength to strength, with more pages and full-colour magazines were instigated a few years ago. BUSES regularly undergoes face-lifts in order to remain fresh and relevant and this in no small part helps it to appeal to the younger demographic, who find news and fleet alterations so easy to glean from online forums for free. In his opening editorial of Issue 001 in 1949, Charles Dunbar said Buses Illustrated aimed to appeal at the young male demographic.

Like many who never, ever miss a copy of BUSES, I can vividly recall my first-ever issue: March 2005 as it goes, and having taken the remainder of that year's run, chose to contact the mag's publisher, Ian Allan, for the missing two copies to complete my first-ever set. Thereafter, I've never missed a single copy (although strangely the other day I went looking for June's copy and can't find it - I'm sure it'll be somewhere). I also choose not to take the magazine on a subscription with the publisher or a third party (PSV Circle et al) for one very specific reason: I do not trust the Royal Mail to deliver the magazine without damaging it in some way.

I know I'm not alone in this rationale.

However, today was a day of celebration (even though a national postal strike looms on Thursday) and it was with Lincolnshire-based Delaine Buses of Bourne that I, on behalf of the LEYTR Editorial, did venture to Swindon to visit the specially-arranged one-off rally at the National Science Museum at Wroughton. We hit the tarmac just after 1030 and parked in what seemed a somewhat strange line-up - front wheels on the grass! 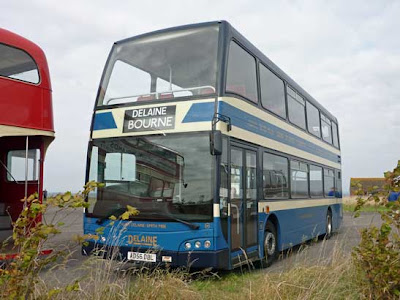 My transport was with this vehicle owned by Delaine Buses - the first-ever purpose-built East Lancs Olympus-bodied Volvo B9TL to be made.
Buses were positioned diagonally on an internal road, facing the sun, but told to park so far forward that their front wheels mounted the grass verge. I looked and thought that a better position would have been to park diagonally but reverse onto the other side of the road, allowing those walking past the parked exhibits to do so on tarmac. As it happens, those wishing to photograph our Volvo B9TL/East Lancs Olympus - the one which featured on the front cover of BUSES in 2006 - had to literally wade through knee-high grass. One photographer even asked me if I'd seen any wildebeest yet!

The day was excellent though. Services were laid on to the Oxford Bus Museum, which was having an open day, tours to Swindon and Avebury, as well as circular site tours. Of particular interest was a service to Hangar L4 about a mile away, that housed vehicles mid-restoration, including an AEC Q-Type, new to Westcliff-on-Sea Motors in 1935; a Bedford VAL 14 with Leyland engine, new to Reliance of Newbury; KPT 909, a Leyland Titan PD2 built in 1948 and a host of other road transport vehicles. 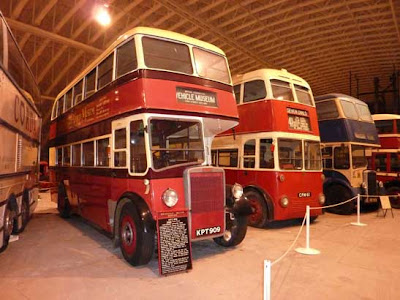 Inside Hangar L4: seen on the left is KPT 909, a Leyland Titan PD2 that entered service 1 year before Buses Illustrated hit the shops.
A special programme costing £2.50 had been produced, listing the attending vehicles (79 buses in total) and was on sale from the Ian Allan stall. So too was the latest, commemorative edition of BUSES. It was also from here that tickets for the buses to Hangar L4 were distributed, with only 25 permitted per departure, since this was the maximum number allowed in the hangar at any time. 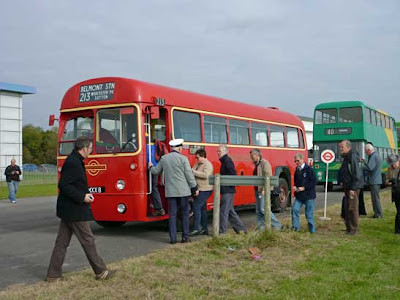 There were two bus stops on the site, that seen here was where buses to Hangar L4 departed every 20 minutes. Passengers show the conductor their tickets to gain entry.
A somewhat small selection of stalls was in attendance, though this didn't stop me acquiring a few more ties for the collection. Access to main Hangar D4 was also permitted. Inside was the largest collection of Penny Farthings I've ever seen, not to mention numerous light aircraft. Apparently, adjacent Hangar D3 is so full of vehicles access was denied for today's even since there was not enough space to create a walkway. 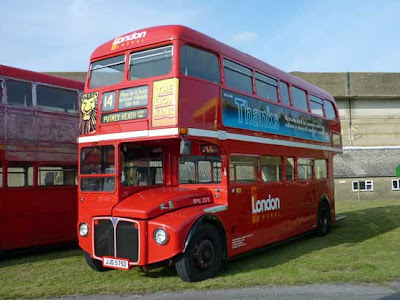 Routemasters featured though in limited numbers. This is my favourite type of RM - one restored to the time immediately before it was withdrawn from service. Too many have reverted to their 'as new' look. The balance is being redressed with examples such as this.
Something I hadn't been aware of was that in 1999 the makeover BUSES had was designed by Ray Stenning, though no mention was made of his company Best Impressions, to which we've made numerous references to on this blog. The company's designs are fresh and vibrant and a lot of thought goes into them, but many are very similar. In terms of BUSES at the end of the millennium though, a quick scout through copies of that year show the revamp to which the programme's opening gambit refers, and the main difference was an increase of colour photos. A very welcome sight. 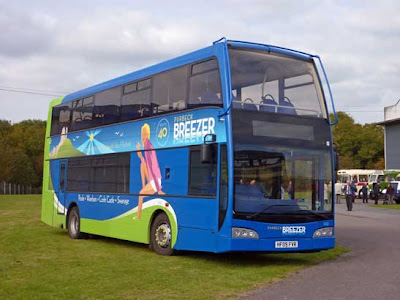 This is the first time I've seen one of Wilts & Dorset's Optare Visionaries, wearing its special Purbeck Breezer branding. These 'deckers have detachable roofs.
All proceeds from yesterday's celebratory rally would go towards keeping iconic RT1 here in the UK. As you'd expect then, the first modern bus to hit the streets of London 20 years before the first Buses Illustrated was produced, was in attendance, parked suitably for decent photos throughout. 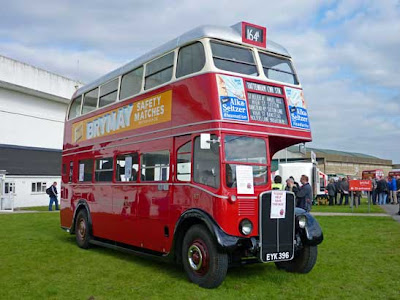 RT1 was positioned in good view throughout. I was told that funding has now reached £100,000, with only an additional £50k needed to ensure its future in Blighty.
Turning back to the 'birthday boy', perhaps one of BUSES' biggest strengths is that of its editors. There have only been six in the 60 years of production. Such lengths of time spent at the helm are rare in publications to this frequency and undoubtedly reflect the enthusiasm each has for their job and the industry at large. At 1300hrs a speech was made by current editor Alan Millar and free cake was shared throughout. I've never met Alan before though have communicated with him via email a few times. I went over and enabled faces to be put to names and spoke briefly about a little something in the pipeline. 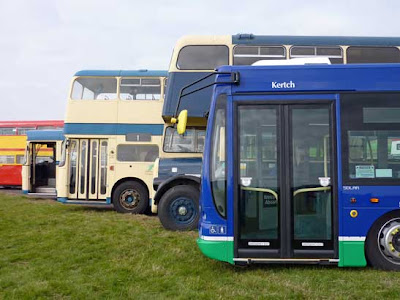 Thamesdown and Stagecoach provided services linking nearby Swindon with the airfield at Wroughton. Here are four vehicles wearing the present and past Thamesdown liveries (l-r): Bristol RE JMW 168P, Leyland Fleetline/ECW UMR 199T, Daimler CVD6DD/Weymann UMR 112 and Scania/Wright WX59 GJU.
The 'biggy' that no one's asked must surely be this: Will BUSES be around in another 60 years? As buses are becoming a more integral part of everyone's day-to-day lives, then so surely must enthusiasm for them continue to increase. Not everyone's into photos, noting registration plates, spending ridiculous amounts of time searching for ties etc., but for £3.95 a month they can purchase a magazine that keeps them broadly updated on developments and acts as a handy repository for posterity ("whoever he is")! - sorry, Flanders and Swann slipping in there. 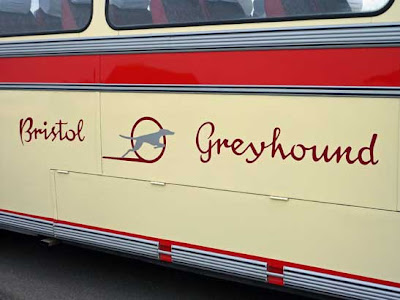 A shot that caught my eye - perhaps a subliminal sign of things to come next year?
Talking of celebrations, in 2013 the LEYTR will hit the big five-o. I wasn't even born in 1963 and m'colleague was just teething! (GL)