They can't compete on the provision of additional leg room but they can compete on WiFi, age and brand image. Yes, National Express are introducing 8 new direct services betwixt London and Portsmouth, with journey times under 2 hours, and 12 new direct journeys between London and Southampton with 2:15 journey times. 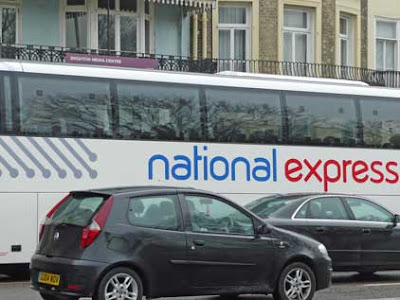 20 new daily departures with air con and WiFi are being introduced by NX from 11 Sept.
I wonder what made them do this!

This is surely all part of NX's retrenchment; getting back to what it does and doing it best. Not everyone speaks highly of their experiences of NX, but then they're an easy target; plenty have issues with the religious beliefs of Stagecoach's chief executive. 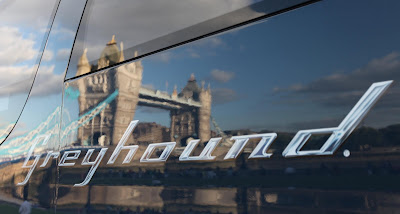 Three days after NX's service improvements between London and Portsmouth/Southampton, First's Greyhound operation commences, between the same places.
We've not mentioned Stagecoach's pièce de résistance - Megatrain. Using the Megabus concept of yield management fares but applied to existing train services; its South West Trains (SWT) operation has been accepting Megatrain bookings since 14 November 2005. Simply book online, with fares from £1, and travel on a SWT service. No chance of a Scania/Enviro between London-Newcastle, too. And who runs the trains between London and Portsmouth/Southampton (albeit from Waterloo)? You got it in one...

Let's not forget this chap - 'Megadriver' - MegaTraindriver in this case!
Stagecoach has been increasing its advertising budget for Megatrain along these corridors in the past week. With both it and NX effectively 'manning the barricades', they're obviously expecting a hit by First's well-publicised Greyhound. 'To be forewarned is to be forearmed' and all that.

It could be argued that First have left NX in-the-lurch somewhat over their bids for the recent round of south-west coach service retendering, losing both services operated by drivers at Barnstable (339 & 502) and the majority of its Cambourne-based work in Cornwall. We understand their bids were simply far too high (deliberately so?). Relations may not be very good right now. Not long after Stagecoach commenced Megabus operation, NX was seriously considering relieving it of all its NX diagrams. Happily the middle ground was found, with Stagecoach going onto be awarded new contracts (444, 484); hopefully the same will happen with First.

One thing's for sure: passengers between London-Portsmouth/Southampton have never had it so good! (GL)