Yesterday saw only one of Govia-owned London Midland's (LM) trains services operate after its drivers refused to work Sundays.

"Are they on strike?" I hear you cry. No. They're legitimately refusing to work on the sabbath as this is permitted in their contract of employment. It's something that harps back to the days of British Rail. LM aren't the only ones able to forgo working Sundays; East Midlands Trains and Arriva Trains Wales are to name but two other operators who can make the lives of the travelling public hell on Sundays if they choose not to work. 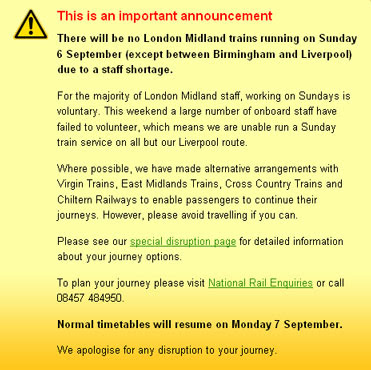 The message displated on London Midland's website yesterday. I bet they've saved it to disc for the next time this occurs.
Colloquially referred to as Barbecue Days, there is nothing to stop drivers from doing this. They're contracted days of employment are Mondays through Saturdays, with all Sunday work at the affected companies being purely voluntary. The same applies to guards too.

Yesterday saw all LM trains cancelled except those running between Liverpool and Birmingham. Virgin Trains and Chiltern accepted LM tickets to ease the nightmare those returning home from a weekend in London, or moving to university for Freshers Week, for example.

We understand that drivers refused to work yesterday following a short-term, double-time payment for working Sundays ending the weekend before. Wrekin MP (Cons) Mark Pritchard, who's also a member of the House of Commons Transport Select Committee, has written to Transport Secretary Lord Adonis, to look into this matter.

RMT General Secretary Bob Crow said it was simply a case of staff exercising their contractual right not to work on Sunday. "Many of our members will be working as rostered and if the company has staffing problems it should sit down with us as a matter of urgency to resolve them." 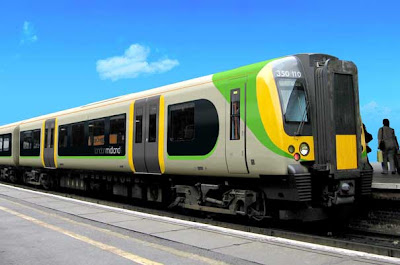 Not being forced to work Sundays is, as a train driver friend of mine said recently, "one of the only decent perks that hasn't been stripped of us by Mrs Thatcher and her drive to weaken the unions". He's very much of the opinion that drivers and guards who are lucky enough to receive this generous concession should fight hard for it not to be eroded. A train driver's basic salary is calculated on working Mon-Sat for the companies with this concession, so no driver has lost money.

I can't think anyone out there can agree that in this 24/7 society of ours such antics can continually be permitted. Train drivers aren't unreasonable people - many of those who spent yesterday at home with their families must cringe at the chaos they've collectively caused.

Only money that can sort this problem out. The sooner the better! (GL)