The post-holder wields so much power that they have the prestigiousness of being given the title of 6th most powerful person in transport and yet there have been five 'position vacants' since the last election. 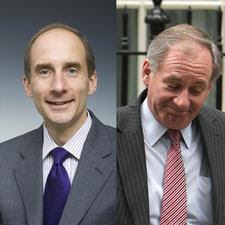 Lord Andrew Adonis (left) is to succeed Geoff Hoon (right) as Secretary of State for Transport
Saturday saw the resignation of Geoff Hoon, the Transport Secretary (with no sign of a badge claiming he was a boat rocker - Eds). His successor is to be Lord Andrew Adonis, who currently occupies the role as Transport Minister.

Adonis has shown that he is willing to listen and to then champion such causes as electrification of some of the main rail lines and High-Speed Rail, so there could be signs of some sort of stability at the DfT in the short-term at least. But the first Transport Minister to keep a blog also said categorically that he would not serve under another administration.

Can you honestly see him, then, continuing as Transport Secretary after next May?

There'll be yet another alteration with Ms Villiers eager to get her hands on all things transport at Westminster. (GWB)