"If it doesn't stop, it'll keep up with the Megabus times" is a wonderful response by a Stagecoach employee in answer to a query about the top speed of an Enviro400-bodied Scania 'decker that's been deployed very regularly on Megabus services.

It got us thinking: for your £1 single fare on a Megabus service, would you consider it good value for money if you were forced to travel from Newcastle to central London (or vice versa) aboard what is quite clearly a double-decker bus, designed and purchased with the sole intent for use in a stop-start urban environment? 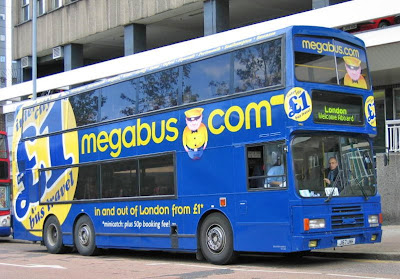 This is how it all started - a handful of ex Hong Kong Leyland Olympians were shipped here between 2003 and 2005 and immediately deployed on Megabus services. They had no proper luggage provision, initially no toilets and were built for people with the smaller Oriental build, so had very poor legroom
My first-ever trip on board a Megabus vehicle was in the late-spring of 2004 when, recouping from a stomach operation, I'd chosen to visit friends in London by public transport. That's not to say I'd normally drive down. On this particular occasion, the Megabus brand had recently seen its first major expanse from its founding roots between London-Oxford, with new services radiating from central London to a fair few places in the UK.

I ensured that I paid only £1 (plus the 50p booking fee) to travel between Birmingham Snow Hill and London Greenline Coach Station. I knew that the vehicles likely to be used on this particular service were ex Hong Kong Leyland Olympians, recently shipped here from the former British colony on what is regarded as a 'Souter whim'. The vehicles had a very low top speed, they had no luggage provision, had seats built with Chinese people in mind and so offered very poor legroom and while technically being classed as having seat backs with integral headrests, only benefited people under 5 feet tall. 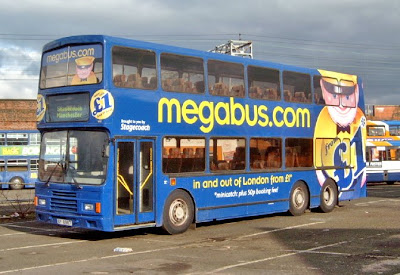 Manchester depot was one of the most northerly depots (also Newcastle) to have a respectable fleet of these Hong Kong deckers. Seen here is an example still wearing its HK registration plate.
None of this bothered me while sat at home booking the ticket online. The potential for slight discomfort was overshadowed by the new Megabus venture. I mean, one pound to go from Birmingham to London!! A Stagecoach director once told me that it was "a typical Brian [Souter] thing" and that the ex Hong Kong Olympians were simply going to be "put in the mix" and "let's see what happens". It's fair to say that no one knew how they'd cope up and down the M1 and M6 or M40, undertaking three or four return trips a day.

I think it's also fair to say that Megabus probably wouldn't have happened if what is currently the EC's accepted proposals to introduce passenger rights legislation was in the offing back in 2003. How Stagecoach chooses to handle this should it become law will be interesting to see. 21,000 Euros compensation for a £1 fare, should a passenger be seriously injured, even if it's not the fault of the operator, is likely to have the Perth-based company a little uneasy at the prospect, as indeed will other operators who charge, say £1 for a short hop in an urban environment.

However, I digress. I travelled to Birmingham by National Express coach, and from my notes it was a 53-reg Volvo B12M/Plaxton Paragon, operated by First Devon & Cornwall's Barnstaple depot. Having walked the mile from Digbeth to Megabus' departure point at Snow Hill, I almost missed the service to London as a bog-standard Leamington depot Volvo Olympian/Alexander 'decker was loading passengers. 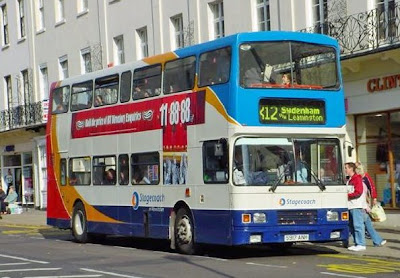 This is how it all started for me - a bog-standard Volvo Olympian/Alexander 'decker whose stomping ground is urban Leamington Spa. Similar to the ex HK Olys, this has no luggage provision, toilet or seats that permit a snooze - should I complain since all I paid was £1?
There were some immediate pluses: the bus was newer than the ex Hong Kong Olympians, according to the driver it would do "over 60mph", so faster than its HK equivalent and it was no worse in terms of luggage provision as it had none, too. Over the subsequent years, Stagecoach got to grips with this latter point and instructed its drivers to insist on passenger luggage being placed at the back, downstairs, with virtually all passengers shepherded up the stairs. On this occasion, in June 2004 (the service started on 1 March 2004) the route could still be described as being in its infancy and so there was what I could only describe as a free-for-all, with passengers scaling the stairs with suitcases-in-hand.

When on the top deck, what did they do with their boot luggage? The placed in either in the aisle, contravening PCV regulations or placed it on the seat next to them, thus cutting the vehicle's seating capacity by 50%.

The Volvo 'decker had proper bus seats, so the 3.5 hour journey became very uncomfortable as it was impossible to put your head back for a sleep. I was not impressed and immediately formed the opinion that "for my £1 I expect more than this!"

Was I right? Old Father Time and all that has made the journey seem less barbaric today than it did back then, but I still maintain that for any fee paid, there are 3 absolute basic standards that any bus or coach operating long-distance travel should adhere to. 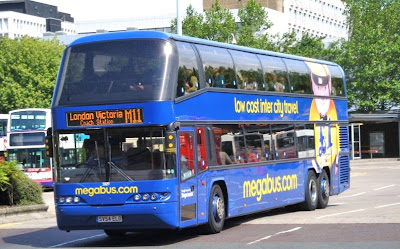 Stagecoach chose to purchase some new Neoplan Skyliner 'decker coaches for Megabus in 2005, with further expansion necessitating additional vehicles. With their climate control, reclining seats, boot space and toilet, they were quite an improvement!
Initially, the ex HK Olympians satisfied only the first two points; latterly toilets were fitted to them. They were replaced by age-expired coaches Stagecoach operated on its National Express contracts from the end of 2005, with Volvo B10Ms from Rugby, Preston and Peterborough depots being dispersed nation-wide to 'up' the standard further.

Very occasionally though I've seen Stagecoach repeat the practice of my journey in June 2004 in which they allocate a bog-standard bus to a Megabus service. Once last year Worthing depot supplied a Transbus Dart SLF to operate the Portsmouth-London service and more recently - and the whole point of this entry - Enviro400 'deckers are being seen operating the Newcastle/Leeds-London service.

Yes, Newcastle/Leeds-London! This isn't a walk-in-the-park at a comparatively short 3 hour journey, this is a journey of at least 5 hours each way from Leeds (around 6.5 hours to/from Newcastle). Aboard a bus. A bus that can only keep to the Megabus timings if "it doesn't stop". It has no toilet and I presume it will be fitted with seatbelts, but don't want to accidentally find out the hard way by travelling on it! Below is what a Megabus driver said about its recent performance:

The 12.00 M12 London service Ex Leeds, is running about 50 minutes late as it has a Newcastle Enviro on it today. It may have to stop for a toilet break somewhere on its travels, thus delaying it further. The 13.00 M12 London service Ex Leeds is currently on time, having been turned around promptly at Leeds after arriving at 12.55, due to traffic delays on the M1 due to road accidents, on its route north from London. **No doubt the 13.00 service will overtake the Enviro.** 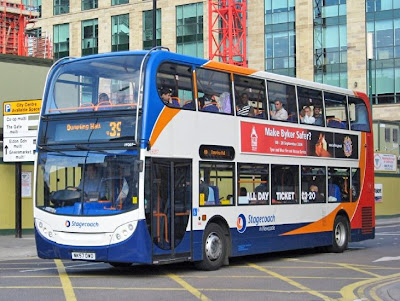 Here's what we're talking about, an Enviro400-bodied Scania based at Newcastle. With delays of around an hour reported on occasions these have been sent to London, is Stagecoach turning back the clock with these toilet-free buses with no luggage provision or high-back seats? With fares still starting at £1, can we really complain when something like this turns up with "London" on the front?
It's bad enough, having accepted that you'll have to travel aboard a bus that normally traverses the streets of Byker, but to then be effectively lapped at Milton Keynes by an air-conditioned Neoplan decker or tri-axle Volvo B12BT just takes the biscuit.

I appreciate the work Stagecoach has done in attracting new patronage through its low-cost inter-city bus travel brand, but 5 hours on an Enviro400 'decker is enough to put even students off. I was a student once and with National Express offering fares of a similar ilk - and with no booking fee - these outings are sure to only deter travellers from what has otherwise been a successful "typically Brian thing". (GL)