A decade of Midland Metro

It's one of the least talked-about light rail networks in the UK, but the Midland Metro (more recently referred to as just "the Metro" reaches a significant milestone this weekend - its 10th anniversary. 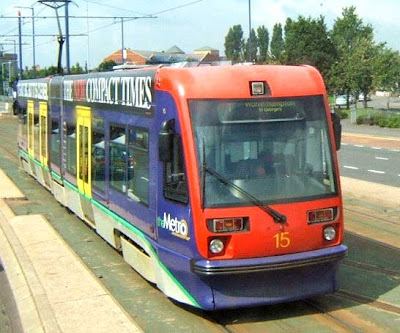 Tram 15 'Agenoria' is seen here in its original Midland Metro livery. Very colourful but not too painful on the eyes.
Construction took four years from 1995, with the grand opening on 31 May 1999. The route runs between Wolverhampton town centre (St. George's) to Snow Hill in central Birmingham. There are 23 tram stops along the relatively linear route. 2km of street running occurs from St. George's to Priestfield. The system cost £145 million to build and its end-to-end route length is 20km.

Designed, built and operated by Altram, a total of sixteen 56-seater trams produced by Italian tram builder Fiream operate along the route. Typical with trams of today, each three-sectioned tram had standing room for 102 passengers. The frequency has remained constant throughout the first decade with around 8 trams per hour during the peaks (every 6-8 minutes) and four an hour in off peak periods.

A few years ago, my quest was to travel every inch of light rail network on mainland Britain. This I managed to do within a year. What made the Midland Metro stand out for me was its comfort. The seats were of a decent height and width, and spaced so that passengers could happily sit next to one another without being too tightly compacted. In stark contrast, Nottingham's trams are places you don't want to be for too long: 2+1 seating in the main, with the window seats on either sides having restricted leg room due to the floor meeting the sides on a diagonal. What little 2+2 seating there is has further leg room issues as your feet are by the front/rear doors.

In terms of aesthetics and welcoming interior, the Midland Metro is in my opinion by far and away the best of all Britain's trams. The route, on the occasions m'colleague and I have travelled, has seen punctuality at 100%, the interiors clean and welcoming and the tram stops well-maintained and modern-looking. 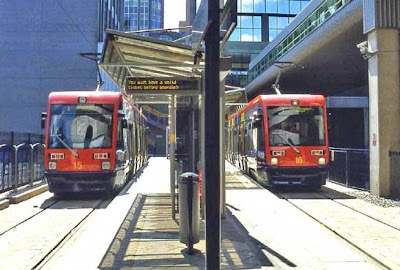 Brand-spanking new: this shot is taken at Snow Hill only a couple of months after the network opened 10 years ago.
Being the West Midlands' sole tram service, it's a shadow of the area's former network, where once upon a time it was possible to travel from Wolverhampton to Birmingham via West Bromwich, traversing tracks owned and operated by four different organisations. At its peak, the West Midlands boasted one of the most extensive tram networks in the UK, stretching from Rednal in the south to Walsall Wood in the north, and from Yardley in the east to Kinver in the west.

The modern-day trams run on the former route linking Wolverhampton and central Birmingham that was built by the Great Western Railway.

Birmingham was reportedly the first place in the country to replace trams with trolleybuses. This year sees the centenary of the trolleybus - an article by prominent transport journalist (and former Mayor of Louth) David Kaye will appear in a forthcoming LEYTR). It was in 1928 that trolleys came to Brum in favour of trams. The last tram to operate in the West Midlands was in Birmingham in 1953 and it was over 35 years before the idea of operating a second generation of tram was considered in the area.

The current network, as mentioned above, is operated by Altram. This company is a conglomerate formed of three partners: Ansaldo, John Laing and National Express West Midlands.

There have been problems with passenger numbers failing to meet long-term forecasts. Rejuvenation attempts took place a couple of years ago with a new livery designed and applied to the trams, though this hasn't been completed yet! The slower-than-projected growth has been the main reason why any attempts to extend or to add spurs to the network have been unsuccessful. That said, Centro, the West Midlands' Integrated Transport Authority, has recently revealed two possible extension plans:

The first would see a link built between Birmingham's Snow Hill station, where the service starts and terminates, to New Street station. The second would be a loop-line built linking the St George's area of Wolverhampton to link with a new transport interchange. Long term plans are more ambitious and include the proposed extensions to serve regeneration areas in the Wolverhampton, Walsall, Sandwell, Birmingham and Dudley local authority areas. 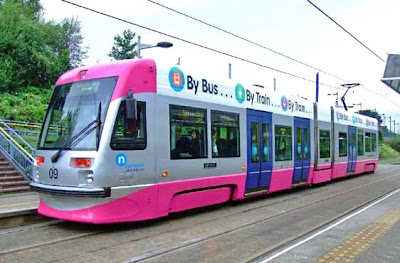 This is the new livery being slowly introduced to the fleet. Notice the adverts it is carrying promoting all types of public transport in the area.
Despite this, the Midland Metro continues to attract new patronage and sees admirable growth each year. It is directly responsible for millions of fewer car journeys and is here to stay! (GL)

Midland Metro's website can be accessed by clicking here.