It's not something we're used to hearing at present, but I bring great news for American Express (AMEX) card holders who wish to use their card to make payment for National Express East Coast (NXEC) train tickets. We can now come in from the cold after NXEC announced that it has started accepting payment with immediate effect.

AMEX charges more per transaction to its retailers for processing each fee and so removing this payment method and forcing its customers to pay using another card, which charges less per transaction to process the fee, would be one of the many steps NXEC implemented to save money. 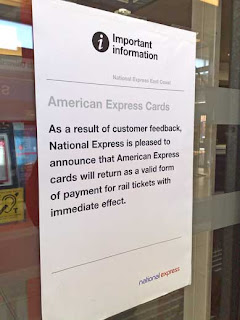 NXEC has considered removing its entire catering business from its trains. When the recession is over, do you think catering's re-introduction would be as simple as reinstating AMEX as a payment method?
I like to think it's a victory for people-power and common sense. Not everyone who possesses an AMEX card has gone out of their way to acquire it; virtually all Lloyds TSB Visa credit card customers were forced to take out an AMEX card when the bank chose to withdraw all its Visa credit cards a couple of years ago.

One of NXEC's biggest assets is its website, which almost forces you to purchase the cheapest possible fares and to mix 'n' match single fares to get the best value. Thanks to a reader of this blog, we are very pleased to see the same Flow Interactive-designed website rolling out for their East Anglia franchise (though it operates as part of the NXEC site) and also all of the Govia franchises: their Southern franchise has adopted the same design, so too as Southeastern but the latter charge for ticket collection. London Midlands' new booking engine is expected soon. (GL)