It's the world's longest section of dedicated guided busway and it's on course for its amended completion date in late-summer.

The Cambridgeshire Guided Busway will link Cambridge with St Ives and Huntingdon using old railway track bed and technically consists of two stretches of guided busway, a bus-only stretch of road and numerous sections of street running, mainly in the built-up areas of Cambridge, St. Ives and Huntingdon. 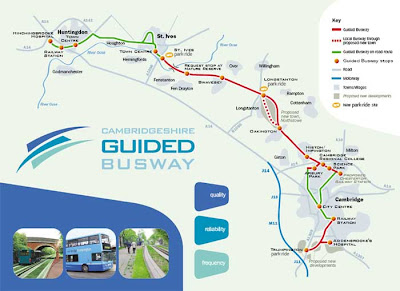 Click image for a larger version.
The spring 2009 completion date was put back to "late-summer 2009" due to continued flooding in the Fen Drayton area. Lothian Buses supplied one of their Plaxton President-bodied Dennis Tridents fitted with sensors to test the vibration and ride quality offered at all speeds. First sent one of its Wrightbus-bodied Volvo B7RLEs, which was also used to test vibration and ride quality in the same way.

Yesterday, the final pre-cast concrete beam needed to build the guided busway track was lifted from its mould. Just over 5,700 15m beans have been made, which when bolted together comprise the two sections of busway, totalling 16 miles. The top speed buses can operate to is 55mph, slowing to 30mph with junctions with the public highway.

This week news broke that Stagecoach Cambridgeshire had purchased independently-owned Go Whippet's depot yard in Fenstanton, adjacent to the A14 dual carriageway. This site will house their Stagecoach in Huntongdon fleet, whose home had been provisionally sold by Cavalier prior to Stagecoach's acquisition of the company last year. Whippet were apparently made an offer for the site they couldn't refuse just before Christmas, though everything remained secret until this week, after Whippet announced it had found alternative accommodation for its fleet just off the A14 near Cambridge Services.

Both Whippet and Stagecoach are the two operators granted exclusive rights to operate along the guided busway for the first few years. Initially, a third operator was permitted to operate along the busway - Huntingdon & District (H+D), though they were subsequently purchased by Stagecoach who acquired their parent company, Cavalier Contracts. It was widely assumed that Stagecoach only wanted Cavalier to get their hands on their H+D subsidiary, which would permit them to be the dominant operator along the competition-free guided busway. 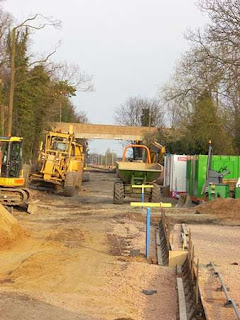 It's estimated to be more costly converting the former railway track bed into guided busway than to upgrade it to railway spec, but the frequency of buses along the busway will be far superior to anything any rail service could provide.
The cost of the entire scheme is likely to be £116.2 million, though Edmund Nuttall, the contractor, estimates the cost could rise by between £6-30 million. The cost itself is greater than that estimated to reinstate the former railway trackbed back into an operational train line! The frequency of brand-new vehicles both Stagecoach and Whippet will operate is to be far superior to any train service that would've been operated - but then it needs to be as the average two-car Class 170 'Turbostar' train can carry over five times that of a Volvo B7RLE/Wrightbus Eclipse Gemini single-decker! (GWB)