The Docklands Light Railway, a wholly-owned subsidiary of Transport for London (it has it's very own special blue and green Roundel) has recorded 66.6 million passenger journeys and a staggering 29% increase in revenue for the year ending 31 March 2008.

The DLR, despite being wholly owned by TfL, is franchised out to private company Serco and was built by the private sector. Serco is responsible for the operation of all trains and employing all staff. TfL is using the private sector to extend one line under the Thames to Woolwich (due to open in 2009) and a new branch to Canning Town and Stratford International (due to open in 2010). Existing stations are currently being upgraded to permit three-car trains to call at their platforms.

Turnover for the year ending 31 March 2008 saw a 4.5% increase, although 2.2% of this was due to increased operating costs. Yet this is more than dwarfed by the 29% increase in revenue for the network, taking the total amount to £61.1 million. At the same time, the level of subsidyTfL pay towards the DLR reduced by 16.7%, to £48 million. 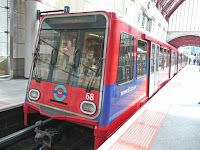 The £73.5 million spent on operating the DLR for the latest period can be broken down as follows:
With the investment being pumped into the DLR, ready for its centre-stage location at the forthcoming London 2012 Olympic Games, lengthier trains are a reminder that with the increases in patronage to public transport, the capacity, mainly for trains, to meet demand is very much needed.

A survey could be conducted to determine how many who use the DLR to commute own a car. I suspect this would be a fairly high percentage - the DLR surely being one mode of transport that is benefiting from people leaving their cars at home, though mainly due to London's congested streets and Congestion Charge, not necessarily as a result of the price of petrol.
Posted by LEYTR