Free is the only way?

I've always been a little sceptical about recent bold claims along the lines of how public transport is about to turn the corner and that "Profitsville, here we come". That said, a generally similar, positive outlook is being made by most large bus operators, transport organisations and, until a report I read yesterday, think tanks.

There are some pretty poor operators out there, who use antiquated vehicles, offer a reduced service to other parts of the UK and yet charge higher fares. I think most people could think of one poor operator. Then there are some pretty unsavoury people who use public transport and while the Police say that people's *fear* of crime is greater than crime itself, it's this slightly unjustified *fear* that's one of the main limitations when 'converting' car users to buses and trains.

With this in mind it's made me (and I'm sure many others) take notice when Brian Souter made his recent speech to a recent gathering of Young Bus Managers, claiming that the "bus industry is about to re-invent itself". How can he possibly be right? Fellow transport enthusiasts know that the more patronage public transport gets, the more money that its likely to have invested, so the recent buzz from virtually everyone at the top of their respective fields in public transport is very encouraging indeed, if rather incomprehensible.

We don't get sent detailed analysis of our local operators' balance sheets so can't really comment on the recent statements in terms of profit and loss, but we do have eyes and are able to see if a route we use regularly is busier - and not just with those over 60 travelling for free. 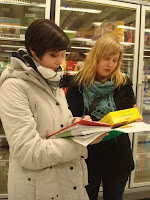 The Grimsby Evening Telegraph's free paper, the Target, were the first to really cast a shadow of doubt over the crescendo of recent positivity by publishing the results of market research undertaken by TNS UK. They found that 72% of those surveyed would not give up their motor until public transport became free of charge; that 33% wanted to ban all but electric vehicles from London; and that 69% wanted 4x4s banned from city centres.

I find it staggering that a third want all but electric vehicles banned from London - a total of 1,036 people were questioned and I'm struggling to think whether or not London people would have been for or against this or not. The intonation contained within the questions is not made clear either, though as a reputable market research company, one has to trust the firm's ability to question in a sterile manner.

TNS UK's managing director, Andrew Czarnowski, said, "We're seeing quite a gulf emerging between people's aspirations and the reality of taking steps to cut carbon emissions. The green message is clearly hitting home, with a significant proportion of people backing new transport technologies and accepting that things have to change. But despite rising petrol prices, we're still not being pushed onto public transport. This feedback is the clearest indication yet of the massive cost incentive needed to get us off the road and onto public transport".

I'm somewhat pleased that contrasting data shows that people aren't leaving their cars at home en mass, as I believe that they simply are not - certainly not in some areas of the LEYTR area - and from a recent journey by bus which saw uncontrollable youths trying to set fire to an upper saloon seat, I just can't see how large chunks of our bus network are physically able to offer a service that motorists will not only save money by using, but enjoy.

Aren't any increases in bus patronage the result of those who normally travel by bus but doing more so as a result of special offers, new unlimited travel deals that are aimed at car drivers? If a bus service that carried 10 people now carries 50 and they're all concessions travelling free, at this percentage increase surely this ups an operator's profits compared to the pre-April amount - even with the disputed reimbursement rates?
Posted by LEYTR