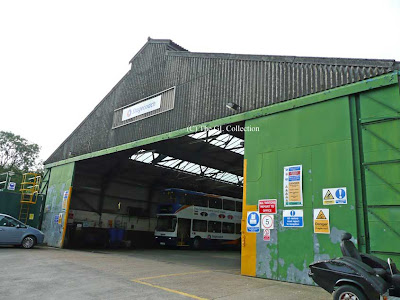 Shortly after ten-past-midnight this morning, the last ever vehicle returned to the bus depot in Louth town centre. The garage on Orme Lane closed for good with vehicles being transferred to Grimsby (5) and Skegness (3). Drivers have been given the option to move to any other Stagecoach East Midlands-area depot or to take redundancy.

The closure spells the end to any bus company being based in Louth town centre. The building, paid for by Wright's Bus Service, was erected in 1946 and opened the following year, housing Wright's vehicles until their subsequent take-over by Lincolnshire RoadCar in 1951. In December 2005 it became the property of Stagecoach.

In its 61 years of operation, the depot has housed many different types of vehicle and has been the main stabling locality for the much relied upon market day bus services linking the far flung tiny hamlets scattered throughout the Lincolnshire Wolds with the bustling Louth markets. Stagecoach say that with the market's decline and the increase of car usage, the numbers of people travelling on its services in the town has made the depot's operation commercially unviable, with a very "poor financial performance for the year ending April 2007.

The final vehicle to arrive at the depot was the 2305 Service 51 ex Cleethorpes Pier, due in Louth bus station at 0010. It was driven by LEYTR member Simon Drake who operated the service using vehicle N326 JTL, a Volvo B6/East Lancs - double poignancy for this vehicle as it was withdrawn from service for good following this run.

Louth depot's longest-service driver is Trevor Morris, friend of the LEYTR. We hope he'll regail us of with some past experiences and memories during his 16 years at the depot for inclusion in a forthcoming LEYTR magazine.

Stagecoach's depot in Grimsby will take over responsibility for operating Service 51 (Louth-Grimsby) and Service 41 (Louth Town Service) using 5 vehicles; Skegness depot will take over operation of Service 10 (Mablethorpe-Louth-Lincoln) plus a retained school service (581 Little Cawthorpe-Cordeaux School) using 3 vehicles. Fewer drivers than needed opted to transfer to Grimsby, so initially 4 Skegness drivers are being loaned out to there.

Ten photos of Louth Depot have been uploaded here, taken a few days before the depot's closure.
Posted by LEYTR