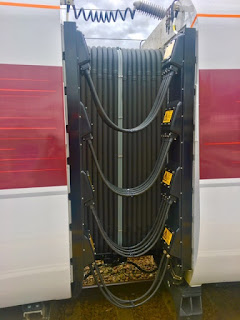 I found myself briefly at Peterborough railway station today and saw yet another shiny new LNER Azuma being tested. While the train was stood at Platform 2, I spent time looking at the various non-glossy exterior elements. One of the reasons why these new Hitachi trains were delayed being tested was the safety concerns over the cabling between coaches. The photo above shows the array of black cables that link each coach to the next. The RSSB had raised safety concerns because these cables were seemingly too exposed and could invite 'train surfing'. This is, sadly, not a new phenomenon and occurs when someone chooses to cling to the outside of a train as it departs a station. TPE's Class 185s have exterior grab handles that are seen as far too tempting for some who cling onto them when a train is pulling away from a station. Safety being paramount, it is understandable that the RSSB sought clarifications and mitigation.
Yet the same GWR Class 800s had been steadily entering service out of London Paddington almost two years earlier with identical coach-to-coach cabling. Having today seen LNER's cabling still in evidence (and abundance) I'd be interested to know what changes, if any, were needed.

As an avid 'Gibraltar Watcher', I was intrigued to see the latest incarnation of its network bus map for The Rock. A linear route map (because you can't call it a Tube map) of sorts existed around 2010 and was soon dropped with no replacement. Last year when I visited, private operator Calypso Transport added a map to its services 5 & 10, though it was littered with silly errors. Now, the Gibraltar Bus Company has enlisted the help of Dr Vijay Kumar to produce a very impressive result. The topography of Gibraltar makes a straightforward 2D map look convoluted yet with some clever simplification, a very impressive result has been produced. The map also now shows every bus stop, which is named and shown on the timetables. The only simplification I can see that seems to have gone too far is to Service 1 at Willis's Road - the route operates a circular route here and never doubles back on itself. To view this new map, click here.

Two preserved GCT buses took part in the Armed Forces Day parade in Cleethorpes today. Frustratingly, I'd not been made known about this until the week before, so was unable to take GCT 113. Fortunately, GCTs 133 (NJV 995) & 57 (NAT 766A/TJV 100) took up the mantle and brought up the rear of the parade in what is the first occasion where both vehicles have returned to their old stomping ground together. Both owners have no Grimsby connections, though were only too happy to take part in today's events. I've seen some excellent photos of the buses being prepared for the parade and I hope those lining the streets were able to reminisce as the buses passed by. I've added this weekend to my diary for next year now!

Stagecoach's bus fleet in Hull has been one which seems to regularly see investment pass it by. It's always struck me as a little curious. Similar to Lincoln, there are precious few local partnerships in the city with the local authority, which is often seen as one reason why the 'good stuff' stays away. This is now changing, following a £5.7 million investment in 31 new buses for the city. An launch event took place on 20 June (which I was unable to attend) unveiled some of the new vehicles, which comprises 20 ADL Enviro200s and 10 ADL Enviro400s. I believe these vehicles will be the first in the LEYTR area to features stop/start technology. We will offer full details of the fleet and its introduction in the next LEYTR.
Posted by LEYTR

I've been informed that the new E400s for Hull will be the first double-deckers with start/stop technology in the LEYTR area since the new E200s for Lincoln have this fitted.

And annoying it is too. As the bus shudders to a stop then 3 seconds later restarts after 1 person alights.