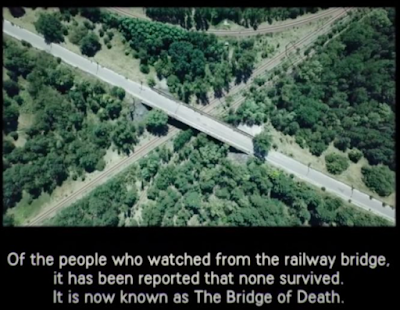 Tuesday - The Bridge of Death (Chernobyl)

Today marked the final day of my 'binge watching' the Sky Atlantic/HBO 'miniseries' Chernobyl. My knowledge of the nuclear disaster of 1986 was sketchy to say the least, and the series, while disputed by Russia to the point that they've said they are to produce their own series that will show the explosion was the result of a CIA bomb, was both graphic yet sympathetic to the obvious anguish felt by so many hundreds of thousands in the immediate area. In the first episode a large number of people gathered on a bridge in the nearby town of Pripyat that straddled a railway line. The locals stood there watching the events unfold at Nuclear Reactor No. 4. The way the scene was filmed implied a kind of serenity juxtaposed with the world's greatest nuclear disaster just a few miles away. Residents - including a father with a child in a buggy - stood witnessing the raging fire while snow-like debris fell around them.
In the postscript at the end of episode 5, the show claimed "Of the people who watched from the railway bridge, it has been reported that none survived. It is now known as The Bridge of Death." A number of websites have disputed this claim, though from my research this is on circumstantial grounds. The general reasoning behind why these railway bridge onlookers would have in fact survived is because so many who were in the control room of Nuclear Reactor No. 4 also survived, one of whom went on trial some months later. Since the onlookers were Pripyat residents and the town's entire population was forcibly evacuated in the aftermath of the explosion, the theory goes that those who stood on the bridge would have therefore been evacuated soon after. This doesn't mean that their exposure to radiation wouldn't have already inflicted a lethal dose, of course. Another reason why this claim is disputed is because no mention of The Bridge of Death is made on the Wikipedia page detailing the Chernobyl disaster.
Of course, trains haven't traversed these metals since the early hours of that fateful morning on 26 April 1986 and while details of observers stood on the bridge aren't as forthcoming as other secondary and tertiary events in the aftermath of the explosion, it doesn't mean it didn't happen. I suspect the fact it was mentioned in the programme at all is to evidence normality in the shadow of one of man's greatest disasters and the railway played a part in establishing conjuring up this image.

The rain continues to fall and trains between Boston and Skegness have been suspended until at least the end of the coming weekend as rivers have burst their banks, submerging the railway in the Thorpe Culvert and Wainfleet areas. Replacement bus services are running between Boston and Skegness and in an unusual turn of events the duration of these road transport services is the same as the equivalent heavy rail services. This is due to the route train takes, heading inland to what was once a junction at Firsby, before the route bends sharp right for the final straight to the seaside. The road, meanwhile is far more linear and effectively follows the coastline. Yet with floodwaters becoming so bad at Wainfleet, East Midlands Trains announced that they may have to pull the replacement bus service, thus offering no service at all.
This prompted a friend who has regularly driven replacement bus services for the railway to comment how dismayed he was that these services are running at all. As an example, he cited high winds as part of one of the named storms that passed over the UK meaning train services were cancelled between Edinburgh and Glasgow and "yet double-deckers were running as replacements between the two cities." I initially brushed this off but it got me thinking. Dangerous winds are just that. Surely if winds were too strong to permit safe operation of the railway, then surely similar consideration should be given to road transport. The railway isn't very resilient and damage to the infrastructure can be more severe, take longer to correct and be more costly than that of the road network, but it is danger to life that should and is considered. If train crews deem conditions too severe to continue then the 'job stops'. Provided they explain and justify their decision to cancel a service, their company will back them and their reasoning. I fear if a bus/coach driver cancels his/her replacement service mid-journey because it is considered unsafe, the same luxury won't be afforded them.

Much was made of Stagecoach's decision to introduce Mercedes-Benz Sprinters into demand-responsive service with their South East company from 12 February 2017. Branded 'Little & Often' the buses were a runaway success and increase patronage by 45%. Politics took hold then, when their replacements - that needed to have greater capacity to reflect the increased growth - were sought. Stagecoach HQ refused to purchase new vehicles to the routes to maintain the high interior standard passengers had been used to; instead local managers were told the standard Optare Solo was to be used and that these must be found from within the South East operation. Now, two of these Sprinters have found there way to Grimsby depot, where they will undertake duties on North East Lincolnshire Councils long-standing demand-responsive service, Phone & Ride. Vehicles acquired are 44014/28 (BV66 GTY/UX).

The May/June edition of the Lincolnshire & East Yorkshire Transport Review was posted out. This edition contains our annual roundup of Rail Rover, Rangers and Round Robins that afford passengers unlimited travel in the LEYTR area. We also detail the early plans for Abellio's East Midlands Railway and how Mablethorpe and Grimsby are once again linked directly by bus. Full repaint details for East Yorkshire (as well as Stagecoach) are detailed, along with the very latest fleet movements. We also list the first five Azuma diagrams for LNER to the end of June. There is a great double page photo of a pair of Class 20s hauling 'The Jolly Fisherman' travelling along a section of track which is currently closed due to flooding. We also offer a full round up of rail service changes in Hull and the East Riding from the May timetable change and we have an article which looks at the role of replacement rail services following the complete closure of a railway line rather than in times of disruption.
Posted by LEYTR