Bizarre Warning, A Trip to Nottingham, Franchising in Manchester & An Ops Director Writes... 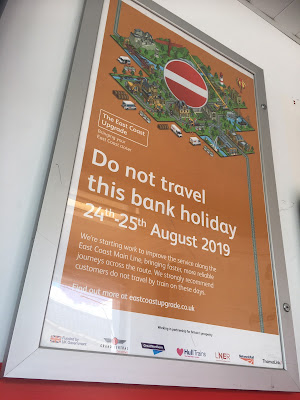 The rail industry has often been criticised for failing to appreciate the extremely favourable position in which it finds itself; namely managing growth. Virtually all other areas of public transport - specifically the bus industry - continues to manage decline of patronage. Yet for the first time in my lifetime I saw a sign at Peterborough station today that attempted to deal with the demand for rail travel over the August Bank Holiday weekend in the most stark of manners: DO NOT TRAVEL TO LONDON.
Wow. Just don't travel, okay? This is easier said than done. King's Cross station is closed for the first major blockade of the station throat's remodelling, which will eventually see the redundant bore of Gaswork Tunnels reinstated. Therefore no trains will be calling at King's Cross over the August Bank Holiday weekend. This is of course an optimum time to undertake these mammoth works. A contact at East Midlands Trains said they were running a reduced service along the Midland Main Line to/from St. Pancras, so capacity alternatives aren't as forthcoming as they might otherwise be.
These works have been on the cards for some time and there will have been many board meetings to best discuss the way forward. Advising passengers not to travel appears to have been chosen as the best option. Wow, just wow.

Tuesday - A Trip to Nottingham

I took the kids to Nottingham today to collect my car which unceremoniously died on Friday. It transpires the Volvo dashboard has no option to show the driver that the alternator has stopped working and that the main battery is slowly being drained of life. Yet the Volvo dashboard so keenly informs the driver of other, considerably less important elements of the car's set-up such as there being no seatbelts used in the rear when there is no-one sat there. The cost of the alternator should surely rival that of a commercial vehicle (though not my Grimsby Fleetline since she has a dynamo!) but to get to the garage in question meant a trip on the tram.
My children have recently become acquainted with the concept of tram travel and so Nottingham's system was next on the list. While the fares structure appears to have been forever thus, I was rather dismayed at the limited options for those undertaking a short hop. Effectively, the single fare is £2.30, be it one stop or from end to end. There is a £1 short hop fare between the railway station and university and stations in between, but the garage I was headed to was in Wilford, so we were headed in the opposing direction. Yes, we could have walked it, but the weather was exceptionally mild and punctuated with cloudbursts one would associate with the Mediterranean.
Return fares don't exist. You're forced to purchase a Day ticket costing £4. I've written about this before - it's a clever trick first instigated in the bus industry to offer a fares increase by stealth. Fortunately we'd be driving back, so just a £2.30 single for me and a child single for my 5-year-old son were all I required.
The trams really are great. Their acceleration is phenomenal and the air conditioning worked a treat. NET dispensed with conductors some years ago (did it coincide with the extensions to Toton et al?) so teams of revenue protection are out and about. During our short journey we saw two teams plus a pair who seemed to be 'stationed' at the station, which is a particularly busy stop for those a little disorientation and in need of the best ticket.

I've been catching up with my industry magazines and have been reading in greater depth the decision by Manchester's Mayor, Andy Burnham, to position Transport for Greater Manchester so that its preferred outcome concerning the continued operation of local bus services is for the Franchise model, over Quality Partnerships with local bus operators. Nexus initially stuck its head above the parapet a few years ago when the North East PTE chose to make changes to the legislative framework for franchising to be introduced here, but this was successfully fought by operators and the whole sorry saga ended up in court.
The arguments both for and against have barely changed since the decision by Nexus to walk away from Franchising. The key concern for operators is that local residents are not being properly told about the costs of setting up and maintaining such an enormous area of regulation. London was, though is no longer, offered up as the utopian model, but ridership here is falling year on year as the money TfL is awarded has been reduced. In a dystopian society, passengers are fleeced by local operators who run when they want to and charge what they like. Profits are not invested but creamed off and passed onto faceless shareholders. While some elements of the last two sentences rather eloquently summarise how the privatisation of the bus industry has played out, they miss the value for money that private operators bring to the table. Nexus had to admit that it could not replicate what Go-Ahead, Stagecoach and Arriva were providing in the North East and I fear TfGM will have to admit the same. But then could greater expenditure on local buses be something residents would be happy with if it redressed the balance and that greater frequencies were afforded certain routes that are seen to be lacking, at the expense of busier corridors that seem flooded with buses?
The LEYTR Stig, who holds a senior management position with TfL, composed a blog for this site a year ago in which he attempted to show how there was a link between the desire to leave the EU and the renationalisation of the railways. The broader message contained within his text was that these two seemingly juxtaposed subjects could in fact be replaced with any opposing subject matters provided the public feel strongly enough about them. I'd counter that operation of local bus services is rising up the leader board as shown by the decision by Manchester (Liverpool has also threatened the same) to take commercial bus services from private operators and make them bid for the rights to run routes designed by the state. The continued perception of a bus industry that doesn't cut the mustard - whether it can be demonstrated or not that value for money is being delivered - will only play into the hands of its detractors.
Similar to the cataclysmic warnings about the effect leaving the EU could have on the UK economy and that renationalising the railways would deliver services run using the same model as employed by Thameslink, Southern & Great Northern, many otherwise rational and sensible people simply no longer care. Using TfGM as a barometer, I fear the bus industry could be heading the same way.

No sooner had I composed yesterday's entry than I came across a letter published in industry magazine Route One. Penned by Stagecoach Manchester's Operations Director Matt Kitchen, the text was a polite sideswipe at Mayor Burnham's desire to introduce franchising in the metropolitan area. Using GMPTE's document Trends & Statistics 1982 to 1991, Mr Kitchen was able to outline the state of Greater Manchester's buses in the lead up to deregulation and five years of public ownership that followed. He cited the average fares increases in the years as follows:
1986 - 13%
1987 - 9.9%
1988 - 10%
1989 - 10%
1990 - 9.4% and 12.7%
This equates to an increase in fares of 86.6% in five years when inflation rose by 33.3 over the same period. Annual patronage dropped from 358 million journeys in 1982 to 290 million journeys by 1991, totalling a loss of 68 million journeys in 10 years.
Increasing costs and declining patronage was the cause of the fares rises. Revenue decreased in real terms from £130m to £105m (using 1991 prices). Mr Kitchin ended by citing the so-called cheap fares associated with publicly-run bus networks: £12.30 was the cost of a weekly ticket, and that was according to 1991 prices - this would cost £25.94 at today's prices. In 2019 an AnyBus weekly ticket costs £19 - that's 26% cheaper.
I've long suspected the editors of trade magazines are passionately opposed to franchising (if nothing else to show sympathy to those operators to pay their wages) and so no response was given. I'd like to see a map showing network coverage. How well was the whole of Greater Manchester covered in 1991, when patronage was declining and fares rising faster than today? You see, those with whom I converse and who are all for franchising readily admit they would be more than happy for the network to run at a loss provided network penetration was improved from that of today, where 'corridors' have exceptional service levels at the expense of the less commercially viable stuff. I'd venture turning the clock back to 1991 to those with these views is a perfectly legitimate decision the Mayor should take.
Posted by LEYTR

A trip to Nottingham is exciting for travellers. There are many tourists love travelling to UK and enjoy a wonderful travel time.
stansted airport cheap parking