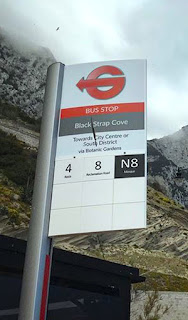 A friend uploaded the above photo to his Instagram story today and I initially assumed it to be a generic Transport for London bus stop flag. Yet I knew he was holidaying in my second home, Gibraltar and soon spotted that all was not what it seemed. Upon closer inspection it can be seen that was one immediately assumes to be the roundel is in fact the letter G and the tiles show bus services operating to the east of the Rock. It's quite a clever take on London's bus stop infrastructure and demonstrates how keen Gibraltarians are to 'keep close' to the UK in all manner of their affairs.
I last visited Gibraltar thirteen months ago and undertook a full review of the current condition of the transport network there. Click here to have a read. I'm rather impressed at this development because the main criticism I had of the bus network in Gibraltar, as written in my summary article last year, is that all bus stops are named are shown on all bus timetables yet the bus stops themselves do not bare their name which makes matters rather confusing to travellers. This has now been rectified with the TfL-esque flags.

One of the main articles in this week's CBW concerned the DfT's intention to release open data on behalf of the bus industry. This got me thinking about the one major area where the bus/coach industry lags behind that of the railway. Some local bus firms consider open data an intrusion, though nothing released is considered commercially sensitive; passengers wouldn't be able to see revenue for a specific bus service, for example. This, of course, also applies to the rail industry, which is steps ahead of its road transport compadre since Network Rail released open data a decade ago, which spawned very impressive and incredibly useful sites such as Realtime Trains et al. More recently, websites have harvested data that shows the location of trains on diagrammatic maps, where possible. Some even show the aspects displayed by signals and the route set by the signallers. Rail's advantage here is undoubtedly aided by the network being regulated and a common infrastructure provider being responsible for the timely signalling and, of course, allocating paths in the first place. It's far easier to group this level of detail together which can be harnessed by suitably knowledgable enthusiasts that know their way around a website.
The government's aim is to ensure all vehicles working public bus and coach services are trackable, using current datasets, and for this to be viewable on many different platforms. Currently, this information is offered on a sporadic basis dependent on operator and their willingness to develop an app to display the detail. Locally, Brylaine Travel has led this particular field, followed by Stagecoach East Midlands and literally weeks later EYMS. While these operators undoubtedly provide a large percentage of bus services in the LEYTR area, there is yet one simple location where everything can be found; you need to download each operator's app. Open data should help ensure this goal can be achieved, provided enthusiastic folk are out there to cobble it all together such as Tom Cairns has with Realtime Trains.
Posted by LEYTR