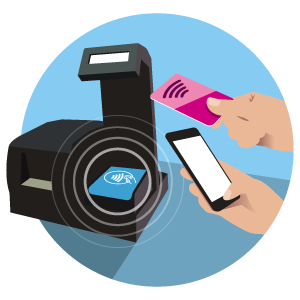 Monday - Touch In, Touch Out

Every bus operator appears to be trialing 'new' touch in, touch out technology. I've been catching up with back copies of industry freebie, Route One, in which details of a trial on Kinchbus's Skylink service were reported. Rather than passengers simply present their ITSO-enabled smart card at the start of their journey, they were instructed to touch in at the start of their journey and to touch out at the end. This would, in theory, enable a more bespoke product to be offered, tailored to the individual and their travel pattern, saving money from the one-size-fits-all day/week/month unlimited travel tickets.
The imposition of a day rover (or equivalent) at the expense of day return tickets is something that hasn't been derided widely enough. The operator concerned instructs their press machine to cites the 'fantastic news' of a reduced-price day ticket as a step forward, when for many it simply is not. A pertinent example is Peterborough. In the late-2000s, Stagecoach withdrew the last remaining day returns from its city network and reduced the cost its Dayrider ticket. While Peterborough was relatively unique in having day returns over short distances in a wholly urban environment, this shouldn't have been seen as a negative. Except it was. The new Dayrider, while only a little more than the maximum day return fare, soon increased to a sustainable level. Consequently, passengers from some of the townships who had previously purchased a day return to the city centre (because that's all they required the bus for) were now paying 40% more, safe in the knowledge that they could visit friends at the weekend, or attend a showing at the Showcase cinema or to 'head to the station for that important meeting' (as one advert said). But the fact that they never bought a Dayrider in the first place rather implies that they had no intention of doing so.
In yet another example of the bus industry going full circle, an attempt is now being made to partly right the above wrong. For operators have now cottoned onto the fact that some passengers just want to use the bus to fulfil their workplace contractual obligations and that slamming them for a product that's so expensive just isn't cricket. So now a pay-as-you-go option is being trialed, but this requires the passenger to touch out to ensure their fare is correctly calculated. Their single journeys, and corresponding fares, are then calculated and are capped to ensure that they never pay more than whatever attractive financial ceiling the operator in question states.
This latest reinvention of the wheel is simply catching up with Oyster in London, which introduced the pay-as-you-go, tap in, tap out concept in May 2004. In many ways it's staggering that it's taken the industry fifteen years to copy a very obvious concept, though also highlights the financial behemoth that Transport for London is and how things are very different with the M25. And that fact that Oyster is non-compliant with the standard ITSO smart cards used elsewhere in the country.

I'll get this week's tenuous link to Grimsby out of the way very early. I was speaking with a former LEYTR contact of the 1970s and '80s, who's come back to the fold. We were discussing the new-look Humber Flyer, which has been renumbered 250 and now operates in tandem with the FastCat 350 between Barton and Hull. Our discussion moved onto route numbers and I asked a question of Service 50, currently operated by Stagecoach, between Grimsby and Saltfleet. The route had previously been operated by Amvale, who acquired it from Applebys. The '50' had only ever been applied on paper, but since Amvale relinquished the service and Stagecoach took over, a proper route number has been shown. Except when the route first went 'live', Stagecoach vehicles displayed '50P'. I'd never received a definitive reason for this. The published timetables and registration document showed '50'. I contacted the company a month or two after the route passed to them and soon after the 'P' disappeared. Officially, I was given no reason why the 'P' was shown, yet staff at Grimsby depot led my contact to believe it was something as simple (and shocking) as the letter P being next to the zero on a qwerty keyboard, and that when programming the destination for the Saltfleet service, a fat-fingered administrator pressed both the '0' and 'P' together and didn't spot their mistake. Wow!

Yesterday Go-Ahead Group's East Yorkshire Motor Services company unveiled its brand and new name for the Scarborough & District operation based on the seaside town of the same name. We will cover this in more detail in the next LEYTR. However, the company has branded its open-toppers that work Service 109 and the Scarborough Skipper along the seafront. These will be known as Scarborough's Beachcomber and a modified base livery has been employed. When I first caught sight of this new, impressive, bespoke design, I was immediately minded of the very clever Coastal Cruiser design used by Stagecoach a decade ago or so. This livery saw a palm tree (of all things) rise from the bottom of the bus around two-thirds of the way back, and then bend to the same degree as Stagecoach's livery does to the top of the bus (which was missing). Scarborough's Beachcomber design is identical, except rather than a palm tree a blue wave is used, breaking at the top beneath the upper deck seats. The Coastal Cruiser livery was designed in-house (at Hull, I believe, who at the time had commercial oversight of Skegness depot), whereas Scarborough's has been designed by design agency Best Impressions. With swoops and swirls now avant garde, I believe this now reduces the possibilities for truly unique liveries. 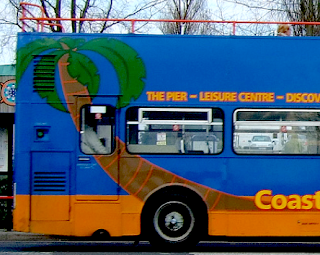 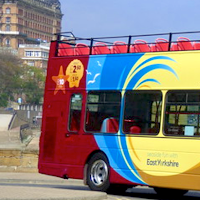 You may consider the unintended consequence of Crossrail's delay to be the sound the death knell for Crossrail 2, or even HS2; I fear a slightly more awkward situation could occur. Rumour has it that Crossrail won't now open until Spring 2021, by which time the Senior Figure who has been confirmed as opening what was once Europe's largest engineering project (aka the Elizabeth line) may, er, no longer be around to do so.
Posted by LEYTR