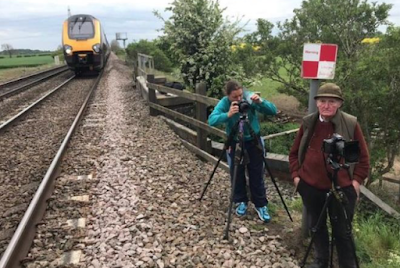 I cannot quite fathom why so many people have an obsession with the Flying Scotsman steam train. It's iconic status doesn't quite match is well documented history. Many other steam engines have had just as interesting lives yet the displays of staggering ineptitude by those so keen to capture the best shot of it passing by are not replicated. Trespass is the problem. The instances of photographers illegally standing on what is considered 'trackside' or 'lineside' and actually on the tracks themselves is not only reckless, irresponsible and inherently dangerous, but causes significant delays to the railway network as drivers are required to report any instance where a member of the public is where they shouldn't be and signallers then stop all trains in that vicinity and 'caution' them past the trouble area. Since Network Rail is liable for delay payments to train operators for trespass (they have failed to secure the railway) the infrastructure company has very strong opinions and is also the organisation that ultimately permits the route and times any train may take on its track. One can fully understand the reticence NR feels about allowing the Flying Scotsman to run at all with its unwanted army of obsessives who will openly commit an offence to photograph the train, while at the same time putting themselves in danger.
Preventing the Flying Scotsman from running on the national rail network has been mooted before, in the hope that this will focus the minds of those who have previously gone 'above and beyond'. This isn't working. Just over a week ago the Flying Scotsman headed north through the West Midlands and the scenes of trespass were as bad as they've ever been. The British Transport Police, in conjunction with NR and train operating companies, is hoping that footage obtained of those committing offences of trespass can lead to people being identified and prosecuted accordingly.

I had an impromptu trip to London with the kids today. We travelled south on one of Thameslink's 8-car Class 700s, none of which travelled beyond King's Cross today. Our 1053 departure left Peterborough very lightly loaded, but by St. Neots it was heaving. We left 700032 at Stevenage and continued aboard one of LNER's Class 91 & Mk 4s. It's easy to forget that these reliable workhorses will also be withdrawn from the end of the year, like their HST sisters. Time was short so we descended the depths to the Underground and had a ride to Victoria. I'd never taken any notice of child fares in London and so was pleasantly surprised to learn that children under 10 travel for free on the Underground. Once at Victoria I momentarily lost by bearings since the road layout has changed somewhat. We briefly saw one of East Yorkshire's Levante 3 coaches working the 449 and then went in search of buses back to King's Cross. I'd previously made this journey on the 73, though I've been out of the loop for quite some time since it's now the 390 which links the two locations, with the 73 seemingly stopping short at Oxford Circus.
My plan for what may be my kids' last trip on a HST was scuppered when a Class 90-hauled set of Mk 4s was at Platform 3 working the 1406 to Newark. Still, they seemed happy and we made use of First Class (they didn't like the apple and raspberry cake, which is a shame since I had to eat theirs in the end), where the service was very attentive and we were offered food and drinks immediately after departure.
It was quite a nondescript trip to London, to be honest. Train loadings were very busy although our Newark service was quiet in first owing to the short distance of the route. Hopefully, from September, this journey will continue to Lincoln.

I was there in 2012 when the first day was operated. It was a small affair, based on the anniversary of what would have been 90 years since Morley's of Whittlesey started trading. I took my Fleetline along and no sooner had I arrived than I was reassigned due to a no-show for the 1035 Yaxley Circular. I had been down to work the 1040 to Ramsey and back. The organisation of the BusFest has improved no end in recent years and scheduling the bus movements is one thing but allocating volunteer 'conductors' to all journeys adds another layer of complication. I had three different 'conductors' and all assisted the loading of passengers and stowage of buggies. There were 40 takers of my first Yaxley Circular, which headed out via Stanground and Farcet and returned via Holme and Pondersbridge. We crossed the ECML just after the barriers had raised for a Class 91+Mk 4s had passed in the Down direction. The circular was an impressive 55-minute duration. After having caught up with some friends it was time for the 1310 service to Ramsey which was a hive of activity today with the planned classic car show there. I left with all seats taken and while 70% left at Ramsey, their seats were taken by new passengers for Whittlesey. Organisation was especially good at the Ramsey end. Once back in Whittlesey there was a chance for some more gossip before heading out to Yaxley for a second occasion with just 10 spare seats.
It was my first rally without GCT 113's speedo working. I had to remember to write down the mileage from the offside rear wheel, though the lack of accurate speedo wasn't too inhibiting. At just 40mph flat out, there are only certain areas of town where there is the chance of being caught speeding. What I hadn't reckoned on was the heavy rain around 1645. I was around 10 minutes away from where I store the bus and the heavens opened. The bus got quite wet! The forecast was not for rain at all and once under cover I had time to check my weather app which showed not a cloud in the sky! However, and despite this, Fenland BusFest was a great start to the year. I covered 125 miles in total, 5 fewer than last year.
Posted by LEYTR