All free in Gibraltar

28 May 2011 saw all bus services operated wholly by government-run Gibraltar City Buses cease charging passengers to travel. At the same time the network was redesigned different parts of the colony were linked. To coincide with this came the visible sight of virtually all bus stops in Gibraltar having a personalised flag, shelter and decent height kerb. Timetable information is now evident at all stops - something that had been woefully inadequate on previous trips. 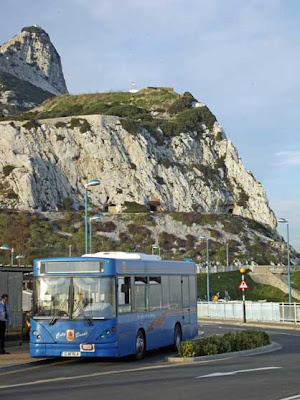 There are numerous cities in the UK that don't conform to this level of provision and the buses operating there want to charge you to travel.
Is this one-in-the-eye for privatisation? After all, the only bus service in Gibraltar that is operated by a private company is the only route that charges a fare. A very low fare, admittedly. City Buses also operate on this route as well and charge the same low fares. It's no coincidence, though, that this is the route that links the airport with the centre. The main reason for the introduction of the free bus network is an attempt to improve traffic flow in the city and the reduce the number of car journeys being made. Gibraltar is rumoured to have more cars than there is space on its entire road network, and congestion is a serious issue - evident immediately upon leaving the airport! 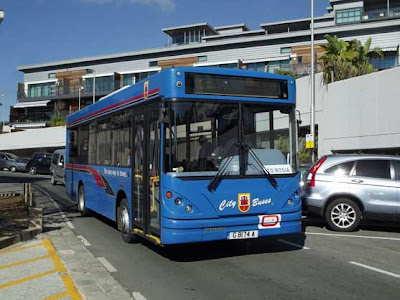 Destination displays have deteriorated somewhat since I last visited. To the point that boards are needed to be put in the window.
Curiously, for every passenger that boards, a ticket needs to be issued. The 'pass' button is not pressed, as would probably be the case here. Consequently, there is a continual stream of tickets that leads from the Wayfarer TGX machine to a plastic bin in the driver's cab. Sadly, passengers are not given the ticket. 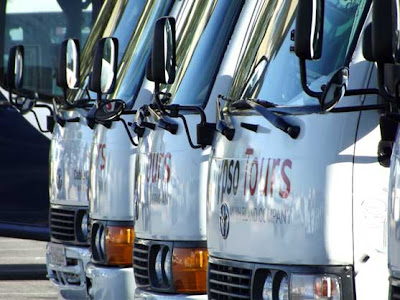 Another route where passengers aren't given a ticket is the plethora of bookable minibus tours 'up the rock'. The coach park is the place where the fleet of over 50 of these Toyota minibuses are parked overnight. They're owned and operated by Blands Travel - the parent company to Calypso Travel. A number of smaller people carriers are privately owned and operated on tours to the top of the rock and double up as taxis in the evenings.
In November of last year, akin with other tourist hot spots here in the UK, 'winter' timetables were introduced that saw a slight reduction in frequencies, but they are nonetheless favourable. It was during November that I made yet another trip to the city, this time with some friends, totally oblivious that we would have free rides throughout our stay. 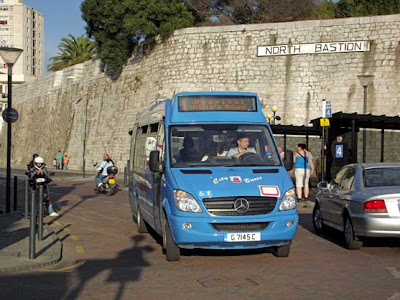 There are four of these Mercedes-Benz/Unvi minibuses for use on Service 1 to Moorish Castle Estate and Willis's Road. They have wheelchair access to the rear. At one point the road is so bad that the back of the bus grounds on the tarmac.
No additional vehicles have been purchased, and the restructuring of routes last May saw shorter journeys, so higher frequencies could be introduced on the most popular ones. Owing to the narrow streets, low arches and tight bends, only midibuses can be used on the vast majority of routes. These take the form of 18 Dennis Darts with Caetano Nimbus bodies, seating 27 (new in April 2004). A smaller batch of 3 Mercedes-Benz/Unvi minibuses, seating 14, are used on the 'uphill' Moorish Castle services (new in 2010) . They're all impeccably well turned out, considering the terrain. 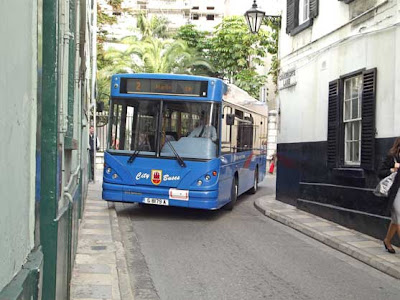 Tight, very tight. Hence why nothing larger than a midibus can be used on the vast majority of services in Gibraltar.
On Service 5 - the only route that charges a fare - Calypso Travel operates alternate departures in between City Buses' throughout the day. This runs from the Spanish border (Gibraltar Airport) to the city centre (Market Place) and then onto Reclamation Road. Additional 'shorts' operate between the Airport and Market Place. Fares on this route are a bargain - £1 single, £1.50 all-day ticket for the route and £6 for a ten-trip ticket that must be used within 7 days. No other service operates to/from the Airport so you can't cheat the system. 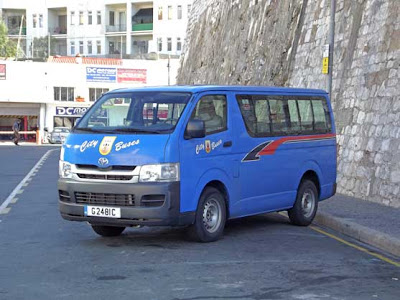 City Buses operates this nearly-new crew vehicle. The Toyota seems to be the most popular choice for the people carrier in Gibraltar.
To coincide with the revised network, a hitherto lesser-used couple of bus stops in the old Market Place have been revitalised, with five bays constructed and an information office. This now acts as the city centre bus station. Strangely, it is neither referred to as a 'bus station' or the 'market place' but 'West Place of Arms' in all the literature. 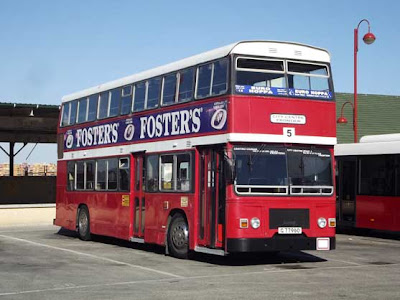 I do believe that this bus is something of a rarity - it once operated in Baghdad! Sadly it wasn't in service when we visited in November, but does see regular use during the summer months.
It'll take quite some time to 'bag' all the Darts, though. Even longer to bash all the 'deckers used by Calypso - they're the only 'deckers used in service. City Buses has a pair of 'deckers used for school contracts and a coach, that passed me before I could get my camera out, being driven by a driver under instruction. 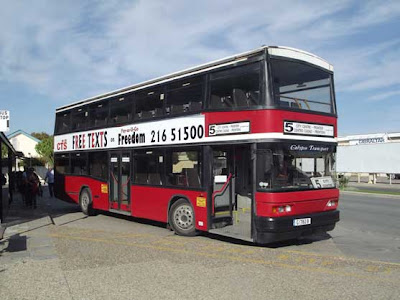 Operation of services, while running to the frequencies advertised, only have one timing point - that of the start location. Even cross-city services do not have a departure time from the West Place of Arms (bus station). You just turn up and wait. Luckily never too long and, let's face it, getting a free ride means you're not going to be too put out having waited 30 mins.

A trip to Gilbratar will not disappoint anyone with an interest in buses and coaches. Provided you can get a cheap flight (meaning a requirement to book many months in advance) I can heartily recommend The Bristol Hotel (the city's longest established). We did flights, petrol to Gatwick, airport parking and three nights B&B for £180 each. You probably wouldn't want any longer than three nights there. A trip to Charlie's Steakhouse is also a must. Order a chocolate dessert and see why!