The scourge of modern society

Interesting to read Barry Doe's column in the latest RAIL magazine, in which the Fare Dealer is clearly struggling to supply fare deals as he wrote almost solely about something very close to my heart: the problem with mobile phones ruining journeys on public transport.

While Barry's experiences covered trains (and were far less unpleasant than those I've experienced on the top decks of buses), I agree completely with his sentiment of the phone taking over the user's life. Loud conversations were the subject of Barry's ire; for me it is people - usually teens - choosing to play their music out loud. Those who've travelled by bus, regularly sitting in the upper saloon, will know what I mean.

I can cope with those who have headphones in but have the volume cranked up to damaging levels as at least they've bothered to consider others and plug them in. Where I intervene and usually cop a mouthful back for my trouble is when people think it acceptable to blurt out their playlist for all to hear, seemingly without regard for their fellow travellers.

I always politely ask them to plug some headphones in, rather than a blanket: "Can you turn that off please?" as it seems less harsh. Often you're greeted with a silent glare but they conform. They know it's unacceptable, that's why. Very occasionally they're apologetic - these are the minority who think that just because it is a double decker the sound gets lost somehow - and can immediately see this is not the case. Mostly, though, you get cocky remarks, but usually silence prevails.

Obviously I never say it to a gang, nor do I impose my wish on people who've been on the bus longer than I have.

On trains, I like Barry never travel in the Quiet Coach as I do not trust my fellow travellers to abide by the rules. And the guards understandably want a quiet life (if you'll pardon the pun) so loathe enforcing the rule. I once travelled from St. Pancras to Derby with Midland Mainline and a chav sat in the Quiet Coach and played his music out loud. He was politely asked, by myself, to put the music on headphones, and although the music was turned off, he opted to stare at me from Leicester onwards, eyes burning with hatred and rage.

I fear that in urban areas by bus, the battle is lost. Ideally the playing of music out loud on buses needed nipping in the bud 5 years ago, when music players became commonplace on mobile phones. Rural journeys fair better. It is a very brazen individual who dares play his/her music out loud on a single decker. There's also no way of knowing which journeys are likely to have these mobile disco lovers on board. As an example, three weeks ago myself and a LEYTR subscriber travelled to Hull and back using Stagecoach in Lincolnshire/Grimsby-Cleethorpes. We travelled on a 6 buses and not once did it happen. Yet last May I made one journey on the Stagecoach X3 from Newark-Lincoln direct (immediately prior to its withdrawal) and parents allowed their kids to have their music playing out loud.

While music blurring out loud may be a low point of travelling on public transport, an undisputed high is crossing the Forth Bridge by train. I've done it countless times, which made the same edition of RAIL a fascinating read as editor Nigel Harris captured a number of very rare shots from the bridge that can be viewed on the magazine's website. I'm very envious indeed! 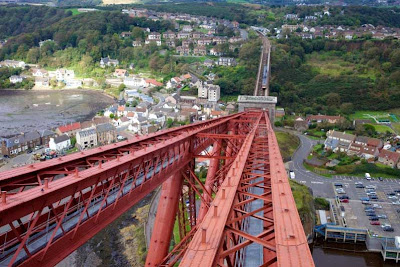 Yourbus in Nottingham has piped local radio for all to 'enjoy'. Most passengers I know avoid their buses, unless you enjoy beong force fed local radio of course.

How common is this?

Personally, I always use the Quiet Coach because of the rules banning mobile phone/mp3 use out loud. First Great Western train crew are always extremely good at notifying passengers when they're in the wrong, and because they are persistent, many passengers will automatically walk to the vestibule before picked up their call. If the rules are enforced, people generally will follow.

There's something even worse, especially on London UndergrounD

The rpetitive, moronic, unnecessary MUCH TOO LOUD "announcements" - at least 95% of which are not needed at all.

Not only London Underground, Southeastern and South West Trains as well. Ruin a journey, but nothing you can say will stop them. So I use the train less than I used to.