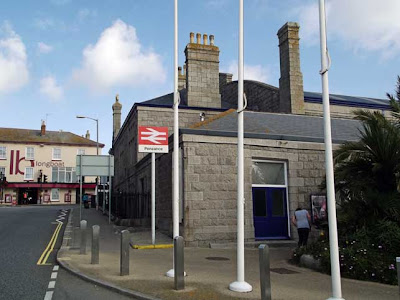 After a very enjoyable breakfast at our B&B, we made the short walk to Penzance station, where out next service was boarding, the 0844 First Great Western service to London Paddington. 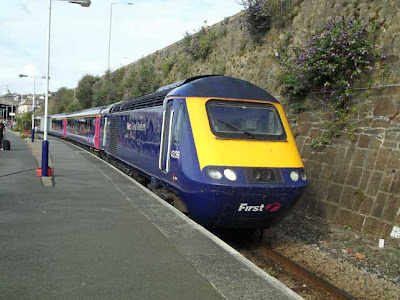 43139 was leading on Platform 1, with 43070 at the rear. Both trains were named, with 43139 named after the FGW driver, Stan Martin, who was killed when his train hit a car that had been deliberately left at a crossing at Ufton Nervet on 6 November 2004. 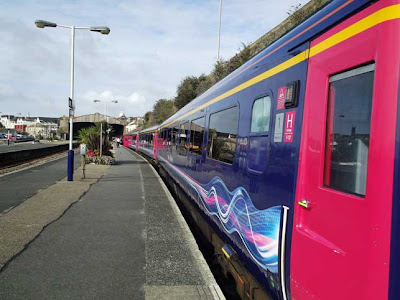 First's 'dynamic lines' livery looks very nice on all trains it is applied to. A testament to the iconic HST design that such a modern, vibrant livery can look so well on a train that is 30 years old. 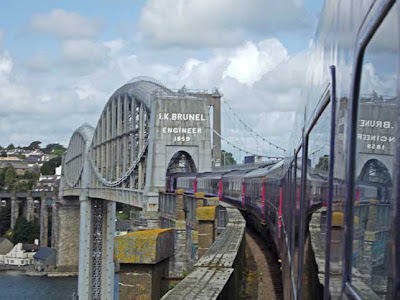 It was such a bind! I had to endure yet another journey through Brunel's expertly built Great Western Main Line from the South West. From the confines of my favourite First Class interior, it's the sort of journey that I could never tire of. During the Top 'n' Tail jaunt of 2009, I captured a shot of the Royal Albert Bridge that I was so pleased of, it is hanging on a wall in my house on canvas. I tried to capture another shot from a different perspective this time. To think that once these mk3 coaches are withdrawn, sticking your head out of an open window to capture such a view will be impossible on a normal passenger service. 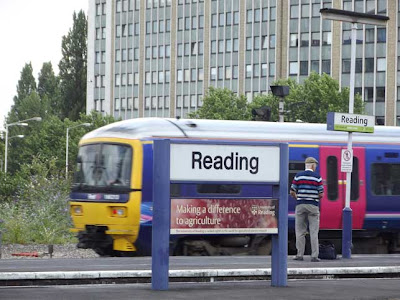 We alighted at Reading a couple of minutes after our scheduled 1315. It was a fast journey though, with Penzance linked with central London in just 5 hours. We had a relatively short connection here in Reading - a station undergoing extensive renovation to the track layout and later the station itself - with our next train departing at 1334. Bound for Gatwick Airport, one of First Great Western's Class 166 Turbo Express trains was loading. 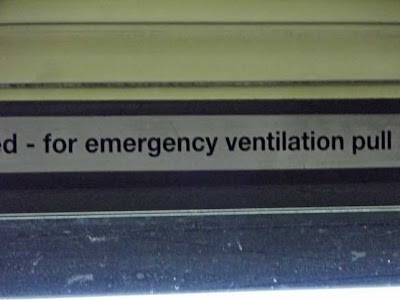 I'm not a big fan on this type of train operating such busy journeys in one of the most densely populated areas of the UK. They are woefully inadequate in both their internal design and ventilation. I wrote an article for Buses last year, in which I compared the coach and rail services between Oxford and the Capital. Why anyone would choose to pay good money to commute on one of these hot, cramped and ageing units when both coach operators provide a 24/7 high-frequency, modern express service, far cheaper than the train and with proper climate control, is a mystery. This sign was located above every window on the train. 'Emergency ventilation' is very misleading. It should state 'For a draught of breeze or any description, please open this window'. Our train was 166209. 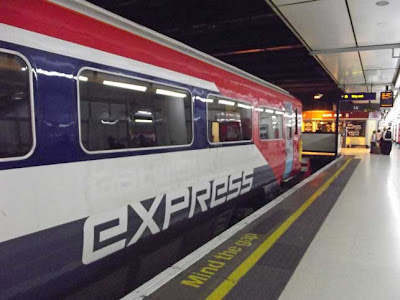 At Gatwick Airport there was our first (and, thankfully, last) crisis of the jaunt. Quite unbelievably, I managed to leave my back pack on the train. I was in such a rush to get to the front for a photo I managed to somehow leave it behind. As luck should have it (and I really do appreciate how fortunate I was), the train headed into a siding before working a journey back and I was able to be reunited with it. This really cut down our connection time at the station, and we were next to head into central London aboard a Gatwick Express service. I'd liked to have had my first-ever ride on a Class 460 Juniper, though sadly this was not to be. Now the service is part of the South Central franchise, Southern inter-work the service with other journeys and so two Class 442 Wessex Electrics had to suffice. It was my first journey aboard one of these trains, too, with 442421 at the front and 442410 at the rear. There is broadly a 15-minute frequency on the Gatwick Express service; we caught the 1505 departure, with a 30-min journey time to London Victoria.
We caught the Tube from Victoria to Euston. Despite spending a day in London on 23 May, videoing and photographing trains on the Victoria Line, this was to capture some of the 1967 Stock that were about to be eradicated from the network, I never managed to travel on their new replacement - 2009 Stock. That was until now. 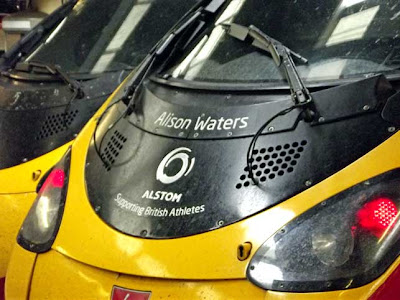 Next it was a trip with Virgin Trains from London to Glasgow aboard their fastest train of the day (and of all time), linking both cities in just 4:08. Our train was 390052 Virgin Knight that also carried the name of Alison Waters on both ends (British Squash Champion, 2010). We didn't have seat reservations on this service and struggled to find two seats together as it was heavily loaded, even in First Class. We departed on time and were travelling at considerable speed when the brakes were applied and we came to a stand north of Milton Keynes. As we blogged at the time, we were held here for about 1 hour and the driver ended up driving back to Hanslope Junction before heading back via Northampton. Damage to the overhead catenary was to blame and two trains ahead of us were in dire straits. We were more fortunate than we imagined, albeit now 1:52 late. 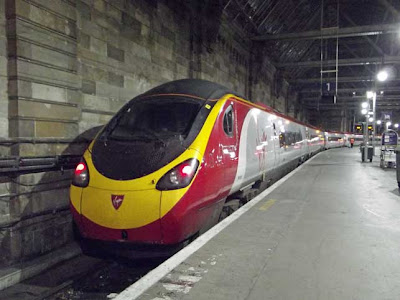 1:52 late was soon to increase as we were told that our train would no terminate at Preston. An un-scheduled stop was made at Warrington Bank Quay so our driver could get back to London aboard another service. We arrived in Preston a little over 2 hours late, at 2032. We weren't waiting long before our next train arrived, the 1757 ex Euston, formed by 390005 City of Wolverhampton. We departed at 2047 and arrived into Glasgow Central precisely 2.5 hours late at 2308. Despite the delay, we were well catered for and kept informed throughout. We were additionally given forms to complete and give back to the guard and only yesterday did we receive some recompense. Certainly, the ambiance and free food/drink in First Class helped. I remember asking for a gin & tonic from the host who gave me two of each, adding "Have double, it's going to be one of those journeys!"