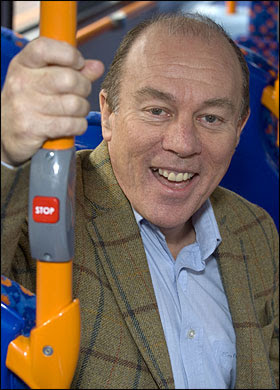 Stagecoach Group chief executive and founder, Sir Brian Souter, said in an interview for the Daily Telegraph at the start of the month, that applying bus industry working practices to the rail industry would make efficiency savings of 15%. It is interesting to see a figure of this kind being made. Traditional bus companies now own the majority of regional train operating companies in the UK and have made no secret (either directly or indirectly) of the costs involved in operating their franchises.

Sir Brian said that better rostering, scheduling and eliminating Spanish practices would improve rail efficiency. He went onto say, "There is a big productivity gap between the two [industries]. That's what McNulty is talking about. That's why Bob Crow is up in arms."

But we mustn't forget that if the rail industry was so inefficient and profit-starved, Stagecoach, First, Arriva, Go-Ahead and National Express wouldn't bid in the first place.
Posted by LEYTR

So, how many years ago did Mr Souter start to run trains, and there are STILL 15% efficiency savings to be found? What on earth has the man being doing all these years? Just think of the profits he has lost!

Souter the christian nut-case whose firm deliberately tries to "set up" shop-steward guards with fake mobile 'phone calls? Until it all falls apart at Industrial Tribunal, that is?
Who STILL has guards on his trains, unlike other London operators?

The man is a deluded shyster.