Who was William Huskisson MP?

I'll confess to not knowing this individual, though his dubious claim to fame is pretty significant. For William Huskisson MP was the first person to be killed by a train in the UK. Not only that, his death was to occur while a passenger on board the very first train from Liverpool to Manchester, operating along the UK's very first railway, on 15 September 1830.

Not only this, his death was the result of his spontaneous attempt to speak with the country's prime minister, The Duke of Wellington, who was travelling on the same train.

Hauled by steam engine Northumbrian - which was being driven by none other than George Stephenson himself - the MP for Liverpool had recently been removed from office and legend has it that Huskisson's attempts to make amends with the PM saw him approach his carriage when the train took on water at Parkside station. In a scene not dissimilar with that which exists in many developing countries today, passengers simply exited onto the tracks and were milling around during the interlude. 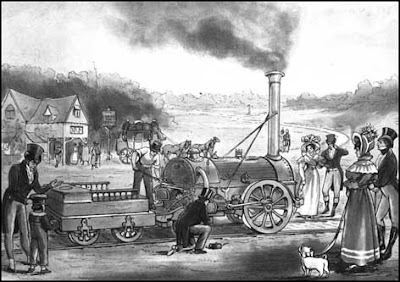 The Northumbrian engine
Huskisson climbed the exterior of the PM's carriage in an attempt to patch up relations when the infamous Rocket steam engine was heard in the distance, approaching Northumbrian and its rake of carriages at speed. Most of the milling passengers either returned to their respective carriage or moved to the other side of the train but Huskisson remained clung to the exterior of the prime minister's carriage, which was the side of the train that Rocket would be passing. 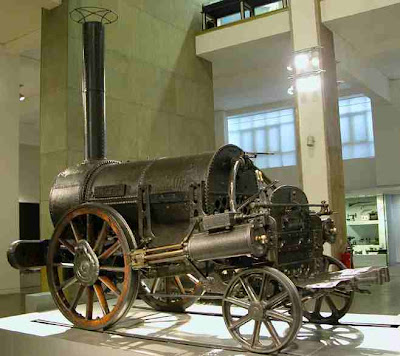 Steaming ahead, Stephenson's Rocket, which was indirectly responsible for Huskisson's death
It is understood that had Huskisson done as his travelling companion had asked ("For God's sake, Mr Huskisson, be firm!") he would have survived, but he clung so tightly to the carriage door that he managed to pull it open, straight into the path of Rocket, which dragged him from the door and under its wheels.

His still conscious body was removed from the track and placed on board Northumbrian which continued towards Manchester on its inaugural journey, with the MP for Liverpool taken off at Eccles and transported to the local vicarage where he was attended to but pronounced dead at 9pm that evening. 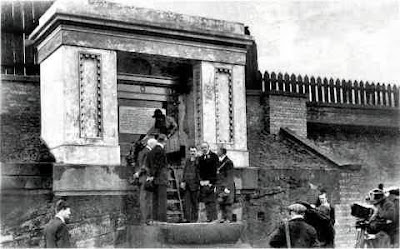 The monument at the location where William Huskisson MP lost his life
A number of statues and monuments are known to exist, depicting William Huskisson. The most notable is in Pimlico Gardens, London where a descendant of Huskisson produced a statesman-like figure in a Roman toga; a second exists in Chichester cathedral. Liverpool has two - one in the Walker Art Gallery and the other in the St. James Cemetery. The most poignant is monument located near to the place where died, which is by the immediate fence to the lineside and easily missed if passing by train.