Hoist by their own petard

Currently, First is the only transport group to publish its bus operations' punctuality figures. The average across its nation-wide network is below that decreed acceptable by the Traffic Commissioner offices, falling below the 'window of compliance'. It is partly because of this that the company found itself before Scottish Traffic Commissioner, Joan Aitken, at the end of last year, being her largest 'scalp' of the year. Even more tragic for First is that it was its Aberdeen bus operation that was summonsed.

Scotland has more VOSA Enforcement Officers than any other region in Britain and it is because of this that Ms Aitken claims she spends most of her time working with bus and coach operators to ensure punctual and reliable bus services continue to operate. 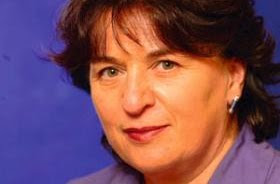 Joan Aitken has six enforcement officers at her disposal
Punctuality figures for October-December 2008 saw Firsts Aberdeen record 83.7% of journeys commencing on time, with the equivalent period for 2009 saw this drop to 77.2%. Intermediate punctuality for both periods was 73.6% in 2008, dropping to just 66% in 2009. The The guidelines are for 95% of all journeys to operate within the 'window of compliance': up to 1 minute early and 5 minutes late. It is for this reason that Ms Aitken called the company to a public inquiry.

Ms Aitken's main 'beef' was the company's request to introduce emergency timetables, following planned industrial action and that this reduced service was to continue after the strike had ended, thus allowing the company breathing space. She deemed this totally unacceptable and ordered the manging director to re-introduce full service at an earlier date. She did show sympathy towards the operating environment in which First Aberdeen finds itself, with no agreement in place with the City Council to introduce bus priority measures, though ultimately took the view that the company had been complacent to 'hide behind the omissions of others'.

She felt that the company's own published data showing so few journeys departing on time should have set alarm bells ringing. Ms Aitken firmly told the company that they were now on her radar and that she would issue the company with a final warning and urge it to work with all available parties to improve performance.

LEYTR Comment: You have to feel a little sorry for First. Obviously the city the transport giant calls home having a bus operation with laudable punctuality, as published with evidence from its own figures, is one thing, but there will be many at King Street (and probably a little higher up the food chain) wondering whether they should have been so candid with their punctuality figures after all. If they published them in the hope that Stagecoach, Go-Ahead, Arriva et al would do they same, they were sadly mistaken. Inferences made by Ms. Aitken claim that it was this published data that saw the company brought before the Inquiry. Removing the punctuality data would send out all the wrong signals, not least to the Traffic Commissioners, who would view this removal very suspiciously indeed.

Nice to see you have got some WRONG INFORMATION!

ALL Scottish operations were in front of her: Aberdeen, Edinburgh and glasgow,

Yes, you're right. Not sure how that happened especially since the report was littered with Joan Aitken's image. It will be corrected.

I always get the Bells confused.

To correct Anon 2156, it was only First Aberdeen Ltd., 395 King Street, Aberdeen that was called to the Inquiry the blog reports on. Other Scottish depots may have had separate PIs but only Aberdeen is mentioned and named in the one of the STC's website.

Both were seen during April last year though our blog entry concentrated only on Aberdeen. Hope this clarifies matters.