From 10 January, the Silver Choice overnight Glasgow-London coach service will become part of First's Greyhound operation with a makeover that will see First compete with National Express and Stagecoach's Megabus services for the overnight Anglo-Scottish express coach service market. 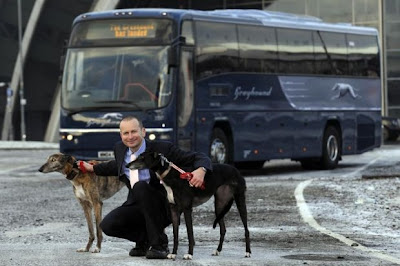 Glaswegian Greyhounds with MD Alex Warner
We knew such an expansion was on the cards for Greyhound, which acquired its own managing director with just two routes operating last September. The Silver Choice service was operated independantly until two years ago when the company based in East Kilbride allowed First Glasgow to acquire its service enabling it to concentrate on its core businesses which include wedding transport and corporate hire.

It's also the first time the Greyhound brand has been brought to Scotland - a country that is more suited to the long-distance, inter-city operation that Greyhound is traditionally renowned for in North America. Having its HQ in Aberdeen, it was surely only time before First got in on the action, too.

The Irizar PB-bodied Scania coaches used on English Greyhound services will not operate the Anglo-Scottish ones, which instead will use ex-National Express First Cymru Plaxton Paragon-bodied Volvo B12Ms (a step down in our view); Wi-Fi won't be available though a free newspaper will continue to be offered. First claims that responses from customer surveys state passengers are 'not that interested' in extra leg room or free Wi-Fi and would just prefer to get from A to B as quickly and cheaply as possible.

Hmmm. Well, for those wanting additional leg room for the 9-hour journey, National Express operate a number of Scania/Levante tri-axle coaches with room to stretch out that are a marked improvement on First's Paragons. The choice is there, I suppose. 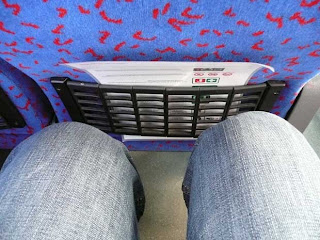 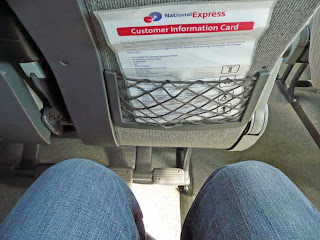 Taken from the LEYTR Top 'n' Tail jaunt of last year: compare the two photos above. On the left is the leg room afforded a traveller who is 5'-10" aboard a Plaxton Paragon-bodied Volvo B12M owned and operated by First and the right is what is afforded the exact same traveller on a tri-axle Scania/Levante operating on Anglo-Scottish services for National Express
Coaches depart Glasgow at 2200 and arrive London Victoria at 0700 calling only once at Hamilton. Northbound coaches depart London Victoria at 2200 and call only at Hamilton, arriving in Glasgow at 0630. Fares, similar with the competition, start at £1, though a booking fee is charged. Only National Express offer £1 fares with no booking fee for those able to print out their ticket at home.