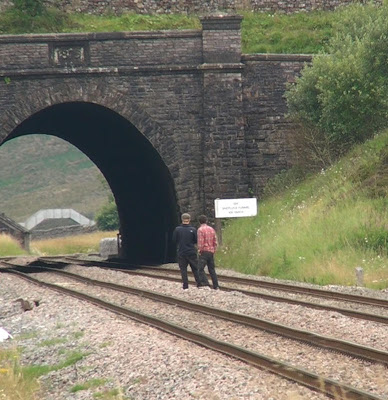 Yes, that's right. The photo does show two rail photographers stood in what's known within the rail industry as the 'six foot' (the distance between Up and Down lines). The photo was taken by a Steam Railway magazine photographer and has been distributed online.

There's a balance to be sought between capturing the best shot possible of a passing train - be it one of vintage heritage or not - and keeping both safe and legal. There can be no one who openly condones this type of behaviour.

Tying this in with the bus industry, there have for many years been problems arising from drivers who feel digruntled at having their photos taken while at the helm of their vehicles. While this is only a minority of drivers, the comments made to photographers - virtually always based on the driver's distorted knowledge of the law - have provoked thousands upon thousands of words written online.

It's very rare a bus photographer breaks the law in the pursuit of his hobby. There are, however, growing examples of rail photographers trespassing to the point that Network Rail and the train operating companies, not to mention the organisers of charter trains, will have to act. The top image is a shocking indictment of health and safety regulations and one that could ultimately lead to severe restrictions on railtours and charter trains.

It's making genuine photographers paranoid about shots they may have taken that appear to show an almost too good a shot of a train. My recent video of Deltic 55022 heading along the ECML's Down Slow in Rutland came with, you'll remember, a one-liner stating that the shot was taken from a legal vantage point. I wouldn't normally have added this, but as with so many who want to distance themselves from those who are willing to risk their lives and the reputation of transport photographers, feel it is now needed.

Other examples of recent lunacy include the following photo from Matthew Wilson's site: 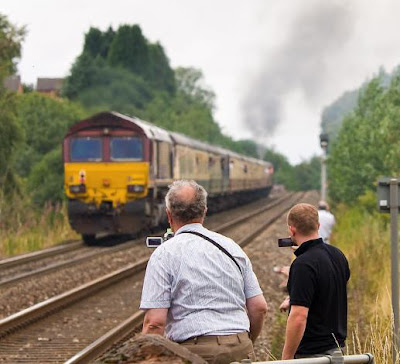 And lest we forget this little nugget from YouTube:

Bus drivers who abuse photographers can be traced either from the image taken or from the registration/fleet number of the vehicle in question and the time and date. Appropriate action can be taken by their employer. Rail photographers who think it acceptable to loiter in the six-foot should be brought to book in the same manner, especially since what they are doing is worse than a nasty one-liner from a grumpy bus driver: they're physically breaking the law.