Every so often something'll come along that really brings a smile to your face. When this is in the world of the transport, all the better. You know the sort of thing: so clever and long overdue that there can surely be no one who could define it as needless or to have no real use.

Just under a decade ago, a product came on the market that would help passengers who use London Underground to make more efficient use of their time below the city's streets. You might be thinking that this is a non-starter since Tube trains are reasonably frequent and cover large swathes of the Greater London area, not to mention provide the quickest cross-London journeys imaginable. How can you make the journey by Tube even more efficient?

The Way Out Map did just that. Back in 2001, Roger Collings produced a truly revolutionary fold-out map that offered perhaps the ultimate to those either in a rush when using the Tube or just hate being down there. Their geographical Tube map with central London enlargement on the reverse, contains details of which carriage to be in to ensure that when alighting, you're positioned immediately by the exit point. 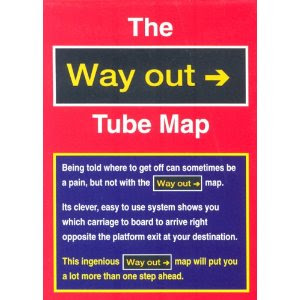 Die-hard Tube fans will be horrified that people want to spend so little time down there, but so often it can be useful even for avids. The other week, m'colleague and I had to get from Victoria to King's Cross in under 30 minutes for a train and while the Victoria Line offers a direct service, wanted to be off as quickly as possible and not get stuck behind foreign tourists with a hundred weight of luggage. The Way Out Map told us which carriage we needed to be in to ensure that when the doors opened at King's Cross, we were by the exit to the escalators. I've owned a copy since 2004 and find it invaluable (on the occasions I don't accidentally leave it at home!).

Every single Tube station is covered and, for its cover price of £1.95, offers superb value for money.

The map tells the user not only which carriage he/she needs to be in for an efficient exit, but also which is best for a smooth connection. For example, passengers on southbound Northern Line trains who wish to alight at Bank should be in the 4th carriage, while those wishing to use the station to connect with Central Line trains should be in the 7th.

The only down side is that the latest version (on sale in the London Transport Museum) is dated 2005 and while virtually all stations have seen no alteration to their internal structure, some have - King's Cross being one - and the map needs updating.

Purchase the Way Out Map here