Well that's it then. The German state's rail company will almost certainly control the second-largest bus company here in the UK, following Deutsche Bahn's (DB) official £1.5 billion offer for Sunderland-based Arriva. Is it such a bad thing? Does it show that privatisation the British way simply doesn't work? 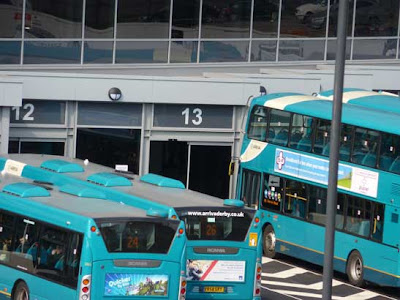 Arriva's formation followed the re-naming of the Cowie Group in 1997, following its purchase of British Bus the year before; both operators effectively stopped bus drivers being paid by the state, purchasing a number of municipals - Derby, pictured here, is one example.
Arriva's purchase was something that came out of left field in terms of attack and time-scale. It was the result of their failed merger with the French state-owned SNCF coaching arm, Keolis, that placed Arriva's long-term credentials in doubt. Had they gone for an all-out purchase of Keolis, rather than a merger, things could have been very different now.

The merger showed Arriva's willingness to operate in-hand with another transport company. They clearly believed that a merger with Keolis would benefit their Europe-wide coach operations - something other members of the 'big five' do not have. It would also mean their emergence into the hitherto un-tapped French transport market. Did their courtship of the French ultimately backfire though, or has the offer by DB been accepted by shareholders as a positive step, when compared to continuing to trade as they had been? SNCF was also potentially in the frame for a counter bid, alongside DB, though wasn't prepared to offer such a high sum. 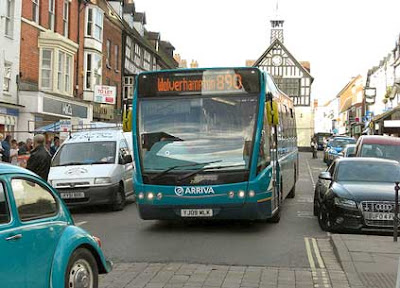 Who'd have thought, other than Hitler, that the German state would one day be running buses in Bridgenorth?
While it's true that employees of Arriva will effectively be paid by the German state, and as some have quipped, be German civil servants, the manner in which Arriva is likely to be operated isn't likely to be noticeably different from now. Anyone who perhaps believes Arriva will be operated in a manner befitting the municipals of the 1970s will be in for a big shock. The Germans will clearly want an impressive return for their £1.5bn outlay.

Turning matters on their head, if British Railways (BR) had still been in operation today, how would we - the tax payers who ultimately fund the company - react to its purchase of, say, Germany's second-largest bus company? The 'red tops' would almost certainly react in a manner sure to stir up criticism: "Spending our taxes on the Germans?!" One assumes there aren't similar news stories in Berlin right now. 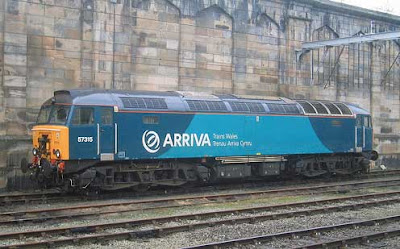 Arriva's livery on the Class 57 isn't anything to write home about. Two of this type top 'n' tail the Welsh Assembly Express train, daily, operating between Holyhead-Cardiff
The other concern - less so for economists and more so for enthusiasts - is the potential for yet another corporate identity to be applied throughout the UK. And this time, a German one. Cue posthumous positive comments for the *British* Arriva livery and how the bland all-over 'Johnny Foreigner' red associated with DB would be another nail in the coffin of UK plc.

Should we be concerned about the potential for the livery change? DB operates Chiltern Railways using local branding, the same too for open-access Wrexham & Shropshire. It is also one of the partners in London Overground Rail Operations Limited. No red with simplistic 'DB' lettering here.

Freight sees a different outcome though, with DB reneging on its initial decision not to re-brand EWS upon purchase, with the first locos out-shopped in its red DB Schenker livery just over a year later. The Class 37s look very striking in their new red coat - dare we say a little more attractive then the dour all-over BR dark blue? Patriots amongst the rail fraternity were even more incensed here since the patriotic English, Welsh & Scottish Railway name was removed.

An outrage? DB's red-on-white logo on the side of trains built by BR is something many rail enthusiasts detest, especially when it replaced the patriotic (though Canadian-owned) English, Welsh & Scottish Railway name
Perhaps one of the immediate points to note is that the German state is currently in discussions with a view to selling its nationalised rail company, so while Arriva's source of finance is likely to be German-based in the long term, its employees' ability to boast they're now German civil servants is not.

It's a fascinating time. As LEYTR Chairman Paul Hill quipped in his 'Chairtorial' at the start of the latest LEYTR magazine, the English bus scene is anything but dull!

Arriva's Bus Operations in the UK

Arriva has a 40% stake in Centrebus Holdings, operating K-Line and The Huddersfield Bus Company.

Arriva's Rail Operations in the UK