More Rattles than at Mothercare

It was the imposition of EU hours regulations designed for long distance services that dealt the final blow. These, you may recall, exacted crew cost penalties on ordinary bus services exceeding 31.6 miles. In 2008, as a consequence, Wilts & Dorset withdrew virtually all of its longer routes. This included one of England’s first bus services, the run-down 34-mile Bournemouth-Ringwood-Southamptons. Too late for W&D, VOSA relented by allowing advertised connections. Yet, W&D reinstated none, indicating the somewhat parlous state of its inter-urban margins. 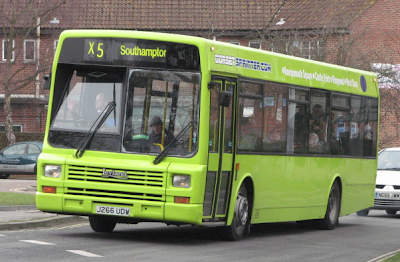 "It’s a green bus, Jim, but not as we knew Hants & Dorset’s”. Dorset Sprinter’s Mark 2 Lynxes may be 18 years old and with their snout and asymmetric windscreen may look a little odd, but the modern livery goes some way to giving an up-to-date image
A unique Bournemouth-Ringwood-Southampton replacement arrived in September 2009. Enter three-vehicle Travelguest t/a Dorset Sprinter, with prominent signal green Leyland Lynxes. It replaced a hotchpotch of connections at Ringwood.

Now comes news that the Bournemouth-Ringwood leg is again to finish. The Ringwood-Southampton section continues. So much for *Dorset* Sprinter! Those wishing to take a Lynx bash on the fast paced end-to-end journey have till 17 April to do so. 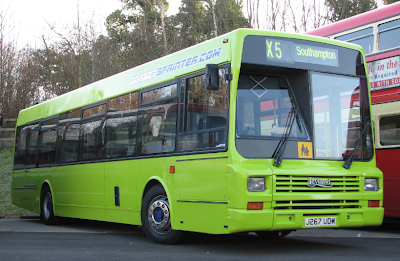 Mark 2 Lynx has proven itself as uncomplicated and reliable on the X5 & X55 Bournemouth-Southamptons
During its short six-year life, the Lynx never enjoyed the best build quality. This and its poorly timed genesis at deregulation & privatisation gave it little chance of any major success. Lynx is nevertheless powerful & uncomplicated and Sprinter’s three ex-Cardiff Bus examples were well maintained. You have to start somewhere, after all, as proprietor Paul Guest states. 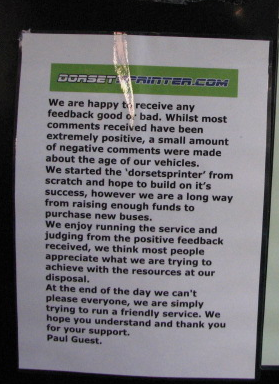 Complaints that the buses are old have been few but have nevertheless resulted in this interesting notice. Passengers will nonetheless miss the Bournemouth leg where in 2008 a lack of ticket inter-availability ensured they evaporated or took to the train… to do so again?
Riding the X5/X55, you certainly sense that the Lynxes belong to a different generation. They are no match for W&D’s 58-reg Scanias on the Bournemouth-Ringwood-Salisburys. On poorer quality roads, Lynx demonstrate an unsettled & harsh ride. Shudders feed through the vehicle. Indeed, there were more rattles than at Mothercare. Not that the upper decks on the Scanias are immune. 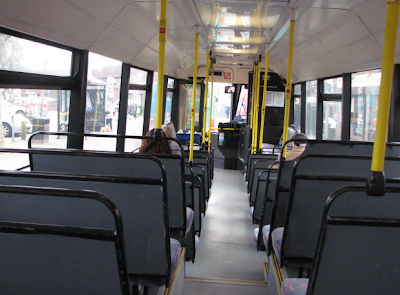 The Lynxes improved on better roads and at speed (there’s plenty of dual carriageway running). The combination of an intrusive gearbox whine and noise from the large naturally-aspired engine can suppress conversations. Seat pitches were good and the Cardiff-refurbed interior was surprising fresh. There remains the awkward ‘clunk’ experienced between some gear changes.

Even so, Sprinter’s done an excellent job with the X5/X55. The vehicles stand out against the scrub of the A31 dual carriageway east of Ringwood. Sprinter’s employed a graphic designer for its attractive leaflets. Passenger numbers are actually reasonable even in the suburbs of Bournemouth, though clearly not good enough. 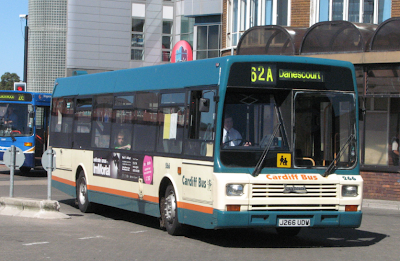 One of Dorset Sprinter’s Lynxes when still at Cardiff Bus, in 2006
Meanwhile, this isn’t the end of heritage running between Bournemouth and Ringwood. From 6 April, Thompson will be operating its two Leyland Nationals on the 238 Bournemouth-Ringwood-Salisbury service on Tuesdays as well as Saturdays, but that’s another story. And expect to see Sprinter on other services, soon.

The Omnibuses Blog: the bite-sized bus industry, every day