Improvements to the MML

Since December 2008, the Midland Main Line (MML), linking London with Leicester, Derby, Nottingham and Sheffield, has been deemed the first 'full' major railway route here in the UK. With passenger demand for services using the MML expected to rise by 28% in the coming years and with a current ban on additional freight paths along the route, Network Rail is keen to enhance what is one of Britain's oldest railway lines, and has comprised a raft of improvements as part of the East Midlands Route Utilisation Strategy (RUS). 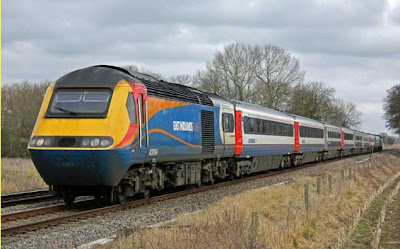 An East Midlands Trains HST currently contains 8 carriages; this could be increased to 11 as soon as rolling stock becomes available. Alterations to some platforms would be needed though
Officially, Network Rail has never admitted the MML is full, though finding paths for East Midlands Trains' additional services commencing from the December 2008 timetable change was so tight, that there was a real chance that the eleventh hour could have spelled disaster for EMT, who'd began advertising its new five-per-hour off-peak trains before firm rights to operate them had been granted by Network Rail.

East Midlands Trains wants to see enhancements to its services, especially the doubling in frequency of its Sheffield-London trains to half-hourly, while the improvements to Thameslink services over the coming years and continued calls from freight operators, such as GBRf and DB Schenker, can only make matters worse. The East Midlands RUS aims to in part address capacity problems with a number of considerations put forward.

Electrification would allow EMT to introduce faster trains - perhaps East Coast's Class 91s when they're superseded in half a decade by the new Agility Trains Intercity Expresses - which in turn would enable trains to run closer together, freeing up capacity for expansion. Faster trains also means reduced journey times.

Attention to capacity is being addressed by lengthening existing trains 'as soon as rolling stock becomes available' so that HSTs go from eight carriages to 11. 12-car trains are being introduced as part of the delayed Thameslink upgrade for the shorter, London commuter services. It is in this area where the congestion is worst. While tracks north of London total four or more, this reduces to three between Sharnbrook and Harrowden and south of Kettering a further reduction in tracks takes place to just two. North from here to Leicester, only two-track operation is possible, thus limiting capacity. 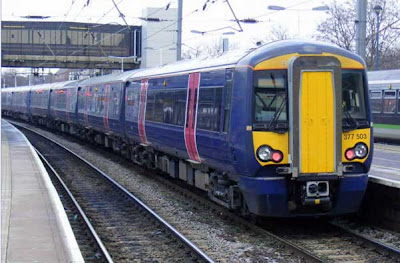 The main TOCs using large sections of the MML are East Midlands Trains and First Capital Connect. A Class 377 operated by the latter is seen here at Bedford - a location just south of the bottleneck
Relative steep inclines of 1:120 to Sharnbrook and 1:200 at Ampthill is the root cause of why a limited number of freight paths have been available. A 2,000-tonne freight train takes far, far longer to climb such inclines and have to be meticulously planned to fit between passenger services. Unlike passenger services, freight companies such as Freightliner do not operate half-empty trains, so they argue that the minor inconvenience of reduced line speeds at inclines is a small price to pay for the efficient manner in which they transport their goods.

The East Midlands RUS doesn't solely consider the MML. Enhancements are also being considered for commuter services in the Nottingham and Leicester areas, that will see further carriages added; a new loop is being planned south of Bedford; the potential for a fly-over at Newark, enabling Lincoln trains to completely omit having to cross the ECML; direct Stoke on Trent-Nottingham trains could be introduced and increased Peterborough-Lincoln trains. 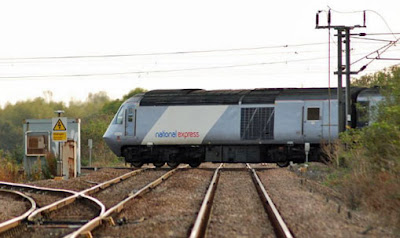 A HST working for NXEC is seen here heading towards London, passing over the Newark Crossing. A fly-over is suggested here, to prevent trains operating between Lincoln-Newark from having to directly cross the ECML's metals.
Of course this is all based on receiving the required funding. With both Labour and the Conservatives pledging to make cuts after the forthcoming general election, the rail industry will have to bear its share of scheme cancellations and infrastructure upgrade delays. Some believe the railways will bear the brunt of cuts; some within the bus industry believe a head-on collision with the Treasury will take place here instead. A reduction in funds is inevitable, we can but hope Network Rail has been sensible in its projections for the MML and not overly ambitious.