Almost two years since the incident occurred, the driver of a National Express Neoplan double-deck coach that tipped over at the intersection of the M4/M25, killing three people, has been jailed.

Phillip Rooney, 49, of Carluke in South Lanarkshire, Scotland, pleaded guilty to three counts of causing death by dangerous driving at the trial taking place at Oxford Crown Court. The brand-new Neoplan Skyliner coach he was driving on Service 592 to Aberdeen veered out of control shortly after leaving Heathrow Central Bus Station at around midnight in the early hours of 4 January 2007. He had initially pleased not guilty. 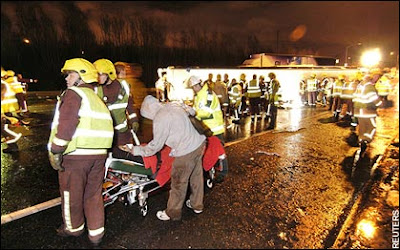 An investigation into the crash claimed that travelling along the spur road at any speed in excess of 45mph was dangerous and posed a serious risk to the vehicle becoming unstable and the driver losing control.

What hadn't been made known until today was that Rooney had been caught speeding in passenger vehicles five times before the accident, and had also been disciplined by Park's of Hamilton - his employer and owner of the vehicle - in December 2004 for tampering with coach's tachometer. 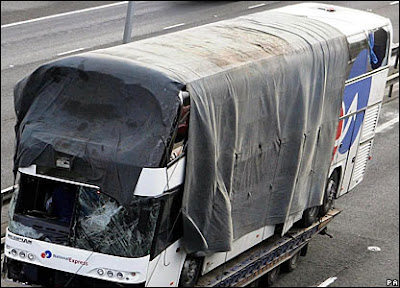 Phillip Rooney was sentenced to 5 years' imprisonment and banned from driving for three years. (GL)
Posted by LEYTR