To the NRM at York

The following post was intended for publication in the latest magazine but was ousted due to a lack of space. 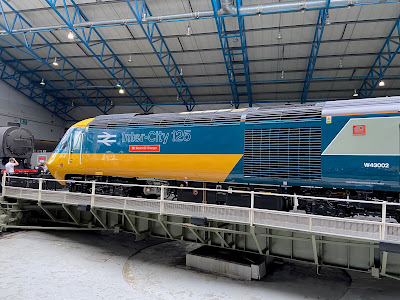 During the last fifteen months or so, my leisure travel by train has been significantly reduced. I managed a few mini breaks last summer to Edinburgh, Norfolk and Southwell, which necessitated a fair amount of rail travel (my last journey of note was to visit my brother in Garforth near Leeds, during which I sampled one of TransPennine Express’s new Class 802s, travelled in one of their new Mk 5 coaches (hauled by a Class 68 loco) and made my first visit aboard one of Northern’s new Class 195 DMUs), but very little since – after all, for many months such journeys have been deemed illegal. This would change in June when the kids and I planned a trip to the National Railway Museum (NRM) in York.

‘Planned’ is the operative word, as such trips cannot be made spontaneously – not any more. I fear this ‘new normal’ is here to stay. LNER introduced reservation-only travel early on, as part of the reduced Coronavirus timetable and seem very keen to maintain this prohibitive restriction. The NRM is urging people to book their visit using its website, and to choose a 30-minute arrival window. Entry to the NRM continues to be free and LNER was offering a good selection of Advance fares aboard its trains, with the cost fluctuating with popular journeys. Booking seats with LNER last summer was a farce; the allocated seats assumed all three in my party were strangers and had to be sat 2 meters apart; hence the kids and I were allocated three separate tables each in coach L in LNER’s Mk 4 stock when we travelled to Edinburgh. This seems to have now been overcome, with sensible allocations seeing us positioned round a table in each direction.

We booked on the 1219 York service from Grantham on Saturday 26 June. Our train was shown On Time until a pair of Colas Rail Class 37s top ‘n’ tailing a Network Rail train stopped at Platform 2 for a crew change (37057+37254). Entertainingly, the relief driver assumed the train would be routed via Platform 4, and so accordingly positioned himself there, only to get quite a shock when the train stopped on the Down Main! Aboard 801204 we departed 5 minutes late and I was heartened at how well the reservation system had worked. The electronic seat reservation indicators were blank and passengers were simply trusted to sit in their allotted seats – we had no need to ask people to move. As this train was a ‘York terminator’ it wasn’t as heavily loaded as a through service to Leeds or Edinburgh and we made good time, arriving York just two minutes down.

York station is littered with social distancing signage, as is the short walk to the NRM that is effectively next door. We were greeted by one of the Museum’s representatives who guided us in as we had arrived within our allotted window. The email confirmation I’d been sent comprised a QR code that was scanned by the person manning the ticket desk and we were admitted entry. Only now did it become clear that our three-hour stay before our booked train home would be rather difficult to fill. Many exhibitions were closed – some rather vaguely due to ‘Coronavirus’, others due to ‘additional storage’ or ‘staff availability’. All that was open were the two main halls. The Mallard Simulator and a couple of circuits aboard the miniature railway (the only exterior event in operation on a Saturday in June!) had to be pre-booked and were fully taken for the day. While the Mallard Simulator seemed very lightly patronised, the lady manning its desk said ‘fallow time’ was needed in between sessions.

But perhaps worst of all was the model railway exhibition – the highlight of my kids’ day (they vividly remembered it being the best thing here when we last visited two years ago). The advertised five different operational trains were not in evidence at all. The only movement that was seen in three hours was a Class 08 shunter that moved out from a tunnel for five feet, stopped and then reversed back into the darkness. With a brave face, I aimed to make the most of what was open to us and it was great to be reacquainted with some very significant and renowned trains – including GWR’s HST that was painted in the original ‘Flying Banana’ livery, despite it being forbidden to stand on any footplates or enter any coaches.

Fortuitously, however, while in the play area adjacent to the miniature railway, we saw that trains departed every ten minutes and that people were not arriving for their booked slot. We therefore chanced our arm and made representation to the two very well-spoken men who were providing the service and had something of a highlight when we were afforded a trip aboard the last departure of the day at 1540. There were Perspex shields between each of the five coaches and the two men were very visibly undertaking a thorough cleaning regime between trips. A figure-of-eight circuit is undertaken and the kids had a great time (as did I when I realised we’d sidestepped the £3-per-person fee). 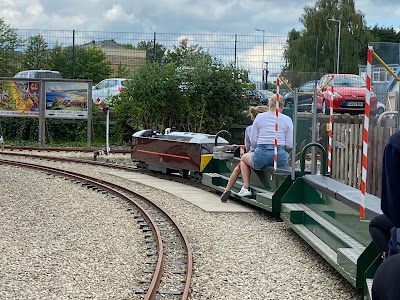 Back at York station, I commented to my son that the blue façade of the Costa coffee outlet was unique in Britain (all others are red). He claimed one at Newark Northgate station was blue, but I dismissed this as he’s only seven and has never shown an interest in coffee. Yet while changing trains at Newark Northgate on our return journey (our 9-car Azuma (801220) working the 1635 London King’s Cross omitted Grantham so we left at Newark for the 1755 London train that started at Lincoln, formed of 800201) he took great delight in pointing out the… blue Costa coffee façade on Platform 1! This was probably the most memorable part of the day. 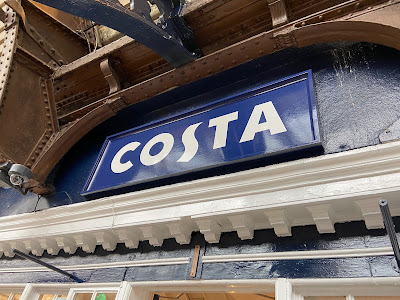 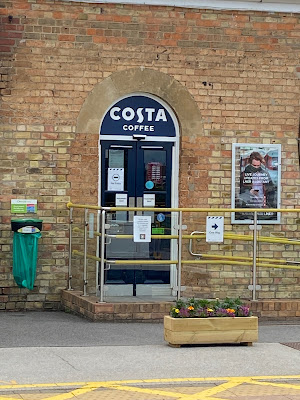 It was great to be out and about by train again, and the kids thoroughly enjoyed themselves (being, thankfully, far less aware of the state of play at the NRM that I was). LNER’s trains were punctual, clean and the seat reservation system worked well. People were travelling in quite considerable numbers, which was good to see. If anyone had concerns with hygiene aboard trains or within the NRM I can state categorically these areas are well in-hand. It’s just a shame that, when asked, my daughter’s favourite part of the day was the train ride home.

Until the remaining Coronavirus restrictions are lifted in full, and until those who’ve been double-vaccinated are no longer required to self-isolate if they catch a cold and therefore display one of the main Coronavirus symptoms, a trip to an establishment such as the NRM is likely to be marred with disappointment, either due to the possible over-zealous enforcement of guidelines or a lack of facilities due to too few staff being available.

Surely the zealousnes that Covid restrictions are applied is a personal viewpoint?

There are plenty in the "it's only flu" camp who think any sort of restriction is wrong, and we should be encouraged to lick each other and the exhibits.

On the other side, there are those who would have the entire museum burned to the ground after a single visitor to disinfect it properly.

All this is driven by vague government advice from politicians who can't be bothered to run projects to determine what is and isn't safe. Long term, I suspect we'll find that some areas were right, and others not. Transmission via touching things seems to be a lot less of an issue than originally suggested when some claimed the virus could hang around for days on some surfaces.

It won't help that the NRM can't plan on a full complement of staff thanks to the "pingdemic". That's a problem for all organisations at the moment and we can just hope it improves in the future.

Thank you for another interesting and well-balanced feature, which is helpful for those of us who have not yet returned to public transport and venues such as the NRM.