Much has been made about the sideways step Messers Clarkson, Hammond & May have made by choosing to unleash their incredibly sought-after brand to Amazon, who, along with Clarkson's long-time producer friend Andy Wilman (also of the Top Gear alumni), will make a new-look motoring programme that, let's face it, Amazon knows will be quite possibly their biggest hit to date.

But why the furore? Amazon will show the show online. It won't be viewable via the traditional avenues such as the BBC, Freeview, Sky, Virgin Media et al.

Yet as I write this, twelve years ago a certain Scots National with a head for innovation and someone who seemed to possess the 'magic touch', was making plans to do something similar with the coach industry.

For it was in 2003 that Stagecoach's Megabus.com first took to the roads - motorways mainly - initially between Oxford and London in a move that many thought strange as it mirrored the company's flagship Oxford Tube turn-up-and-go express coach service between the two locations. 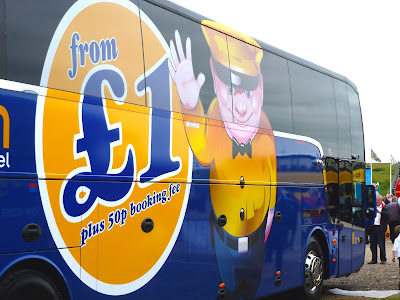 The modern-day Megabus.com uses vehicles about as far detached as those which launched the online-only coach service as is possible. Amazon, meanwhile, is using highly polished stars, immediately recognised.

But of course Megabus.com was the Amazon of its time. Tickets were only available online. And of course, back in 2003, far fewer people had online access. Twitter, for example, hadn't yet been invented and Facebook wasn't founded until the following February. No, back then, Stagecoach had to ensure its promotional machine was in top form and utilising ex-Hong Kong Leyland Olympians, its 'stars' were hardly known and hardly polished.

Amazon has it easy!
Posted by LEYTR

Thanks for sharing this blog!

These are just ways of publicity. Also the post was interesting.
compare Birmingham parking
meet and greet Birmingham