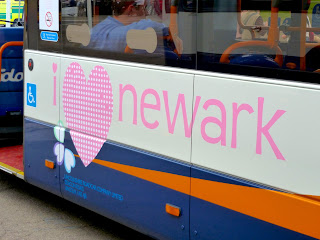 They were introduced in a blaze of glory, offering a new-look brand for the Nottinghamshire town of Newark, but last week Stagecoach East Midlands chose to withdraw its new Optare Solo SRs and replace them with any spare vehicles in the fleet in return for some ADL Dart/ADL Enviro200s in a Scottish swap with Glasgow depot.

Full details of the acquired Darts are contained in the latest LEYTR (due any day now) though in the interim the vehicles they were effectively swapped with had yet to leave.

So. Farewell then "I Love Newark" Optare Solo SRs, 47842-6 (FT13 ODG/H/J/K/L). Newark loved you so much that you were sent away for good about as far away as possible.
Posted by LEYTR