So. Farewell then "happy" Gemini 3

It's been synonymous with Ballymena-based Wrightbus for around a decade, but LEYTR understands that, following pressure from Lothian Buses and others who order large numbers of these body types, the latest version of the company's Gemini 3 body will be discontinued and given a standardised frontage from the company's newer StreetDeck bus.

Still referred to as the Gemini 3, the new-look vehicle which is already making waves with Lothian Buses on its prestigious Airline 100 route, bares very little resemblance to standard Gemini 3s, with orders being fulfilled at present. Yet the only change is the front. What a different the front makes! 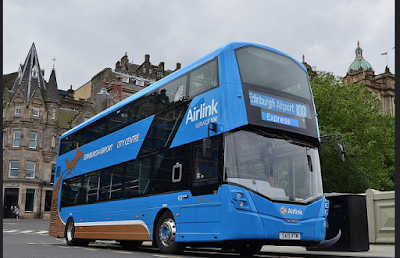 The traditional Gemini body has been part of Wrightbus Eclipse family, with the sweeping curve marking the lower edge of the windscreen on single deckers and the lower windscreen on double-deckers.

The problem, it appears, is that so uniformed is the design, and with so few noticeable changes each time a revamp is made, operators are introducing these brand-spanking-new buses to the roads and passengers aren't noticing the investment. Leading the constructive criticism is Lothian Buses, the UK's largest municipal bus company.

Anyone who knows Lothian knows that its standards of cleanliness is such than you can board an X-reg Plaxton President-bodied Dennis Trident (as I did the other year) and the interior both looks and smells new. Being the recipient of countless Gemini bodies in recent years, and with the interiors being so well refined at any age, it is understandable, perhaps, that passengers simply do not recognise they're travelling on a new bus.

Dramatically changing the design - even if it's just adopting a standardised frontage - will naturally help things along.

Locally, RoadCar purchased a number of 06-reg Volvo B7TLs with Wrightbus Eclipse Gemini bodies immediately before being purchased by Stagecoach. Being delivered well into Stagecoach tenure, they wore a special Coastal Connect livery for the InterConnect 6 (Skegness-Lincoln). They've now been retired from the route, with one of the batch having recently lost part of its roof and operating the Lincoln City Tour.

More recently, EYMS and Delaine Buses have purchased new examples, with Delaine expecting its first and presumably only traditional Gemini 3-bodied Volvo B5TL in the coming weeks. LEYTR understands that EYMS is intending to purchase a batch of Wrightbus's StreetDecks, and has recently been evaluating an example in service.
Posted by LEYTR

They are changes a lot of things I hope they fulfil expectations.
compare airport parking Manchester
compare parking prices at Manchester