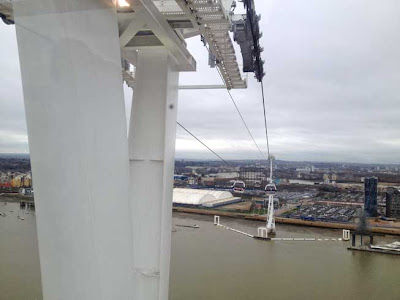 A scene I never thought I'd see: one of the cable car stanchions high above the Thames and I was just inches away

Yesterday I had my first trip aboard London's cross-Thames cable car, making a one-way trip from North Greenwich Peninsular to the Royal Docks.

It's something that friends and I had hoped to do a few months ago, but thick fog put paid to that idea. Yesterday, however, visibility was good and it was a steady wind that I thought could scupper proceedings, though happily this was not to be. 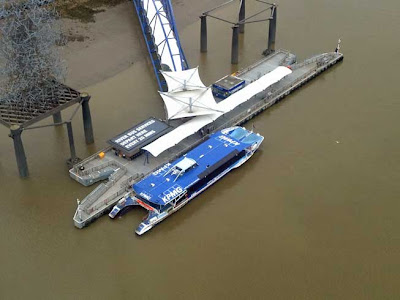 A Thames Clipper at the North Greenwich Pier terminus

We followed the crowd and headed left, hugging the line of the Thames where sure enough the high fencing did briefly part allowing access to the Air Line terminal at the North Greenwich Peninsular.

Staff there were on hand to both marshall the queue and to offer advice to the plethora of tourists wanting to make a trip across the Thames. We had One-Day Travelcards and were entitled to a discount on the standard turn-up-and-go single fare of £4.30 adult and £2.20 child. There is no discount given for a return/'360' round trip, which costs double the single fare for both classes. With a Travelcard (also included are Freedom Pass holders, TfL staff pass holders and Oyster card users) a discount single fare of £3.20 adult and £1.60 child is offered.

We were shown to a self-service ticket machine by a member of staff who set up our purchase after checking our Zone 1-2 Travelcards (we were in Zone 3) and left us to complete the purchase as I was paying by card.

We then climbed a level to the departure area where there are up to four pods under cover at any time and are travelling so slowly that people with mobility problems would be able to board them without an issue. Unlike the London Eye or more traditional cable cars at seaside resorts that travel at the same speed throughout, the Air Line's pods reduce speed to a crawl when they're at a terminal, ensuring the safe disembarkation and boarding of passengers. The doors also open and close automatically. 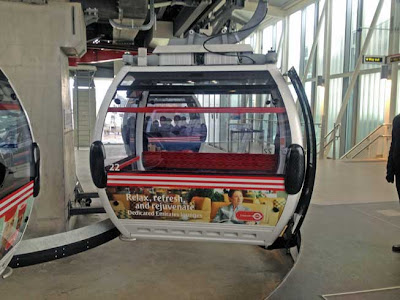 As we 'took off' I did wonder when the door would shut as I was sat right next to it, though reassuringly it closed the second we increased our speed. The view is excellent and the five-minute journey time felt longer. We shared our pod with a family of five from Poland who were busy taking photos and admiring the view. The nearest you'll get to the views on offer are aboard the London Eye and as of two days earlier, the 72nd floor of Europe's tallest building, The Shard, which charges almost £25 for the privilege.

We were thanked for using the Air Line some time prior to arriving at our Royal Docks terminal, which seemed somewhat sterile and then it was over. Again, there were plenty of staff to offer assistance to people with mobility problems. We headed down a level to ticket barriers where we inserted our boarding passes (as we did for the outward journey) and I was pleased to see the passes weren't retained, so a small souvenir can be kept. 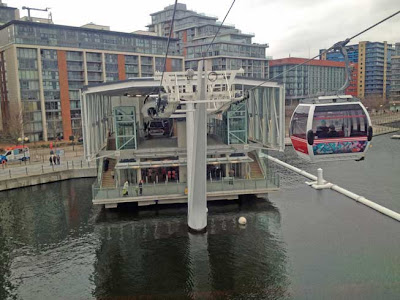 Many saw the Air Line as a vanity project by the London Mayor, with its planned opening by hook or crook for the 2012 London Olympic Games. I didn't follow the story of its inception to completion in enough detail to be able to comment, though the Air Line does seem under-used if yesterday's visit is anything to go by. Yes, it offers another cross-Thames option, but at a price. Even with Travelcards, you're looking at £3.20 one way and both terminals aren't exactly in the throbbing hearts of local communities.

When we arrived at the Royal Docks, we would have had to walk two blocks to reach the nearest DLR station, though in the event service was suspended between Canning Town and Beckton, so we had to catch a Rail Replacement Bus Service, which ironically, was located conveniently outside the Air Line terminal building. And it was in the form of an Ensignbus Volvo B9TL/Optare Olympus that was spotless inside, with the distinct smell of bleach adding to the cleanliness. The last time I've travelled on a bus this clean was in December 2011 when I used CT Plus's Service 701 Park & Ride. 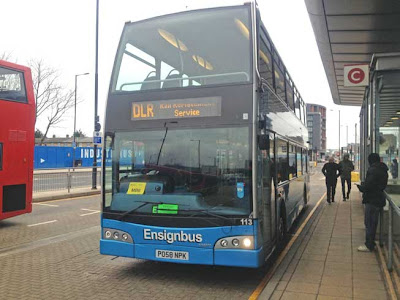 To summarise, the Emirates Air Line is OK for a one-off on a tourist's bucket list, but nothing more. This could be its Achilles heel: once you've visited, you don't return. I honestly can't see it becoming a shining example of commercialism through regular commuters. Would I make use of it again? Possibly - if I was with friends who'd not used it before. It's not the easiest attraction to reach for tourists who are sunning themselves in Hyde Park and who spontaneously decide to have a cable car ride, and this is another of its problems.

One a positive note, my weekend in London, including travel to and from, was one of the best I can ever remember in terms of the efficiency of the transport. East Coast played a blinder heading south on Saturday - our train was punctual (literally!) and the service in First Class was attentive though not OTT. Travelling back was the usual fare evader's dream, with no barrier patrol at King's Cross and Peterborough and we didn't have our ticket checked on board, but we arrived in Peterborough in just 43 minutes. I was so unprepared it was quite a dash to leave the train.

We made numerous journeys using the Underground and I was pleased to see official references to the system's 150th anniversary displayed. I don't think we ever had to wait more than 2 minutes on any platform for a train. Everything just worked seamlessly and if I were a foreign tourist to the city, I would have left feeling very positive about London's transport network - even if they couldn't complete a Surrey Quays - Clapham Junction journey with LOROL thanks to 'planned' engineering work :-(

I went to Royal Docks for my first trip on the Air Line last week (by East Midlands trains' LCN-STP morning service, the Victoria Line, Overground, and DLR).

It was shut because of the high winds.

Boris Bunter's Flying Circus cost more than twice as much to build as any comparable cable way, there was never any business case for it and it was built with £50 million effectively stolen from the London Rail budget. Despite Boris's assurance that it would not cost the London taxpayer to run (he gave a similar wrong assurance in relation to the bike scheme +£35 m p.a,) last week it had a 5% loading and TfL now say £6m per year subsidy.

This is a permanent and dangerous safety hazard.
A cable-car close to the appraoch to an airport!

As with the tower/carne in Vauxhall, that the locals said was too close to the heli-fly-path along the Thames, & the "authorities poo-ppohed it ....
So with this, eventually.

I suggest you google for, or look up references to the cable-car [ Also dubbed the "Arab-fly Dangleway" incidentally! ] in the excellent London blog by "Diamaond Geezer"

I have really enjoyed reading through your blog. I think you have a very interesting subject as well as some real quality and informative content there and I do hope you will carry on writing.

I am looking for passionate writers to join our community of bloggers and I was wondering whether you would consider sharing your posts on Glipho and become a member?

It might be a good idea to give your writing and your blog more exposure while having fun and meeting fellow writers.

Please check us out at glipho.com and drop me a line at hubert@glipho.com for any questions.

Emirates is undoubtedly one of the top and the best airlines in the world. Travellers feel happy to fly in Emirates and enjoy their lovely journey towards their destinations. compare airport parking