Happy New Year to all our readers and magazine subscribers.

I thought I'd start 2013 with a post about a perceived hierarchy between pedestrians and bus passengers.

You could work in the bus industry here in the UK and have not come across the teen comedy show, new to E4, called The Inbetweeners; but I bet you've not managed to escape one particular phrase used in the programme from over 2 years ago.

Writers Damon Beesley and Iain Morris should perhaps be congratulated for the additions to the English language rather than a very humorous comedy programme. The term 'bus w*nkers' being the most prevalent in my line of work.

In an episode in which one of the hapless teens passed his driving test, he and his trio of friends went out for a spin in perhaps the anti-Christ of 'babe magnets': a bright yellow 900cc Fiat Cinquecento. Cocky, loud-mouthed Jay (in the passenger seat) saw a queue of people waiting at a bus stop as he and his friends drove past, so thought it would be a laugh to wind down his window and shout 'BUS W*NKERS' at them all.

The rather controversial term 'bus w*nkers' was then born. I doubt many bus drivers won't have heard it either uttered by school kids as they're in the vicinity of a school or screamed at them as they pass drunken revellers, perhaps over the Christmas period. 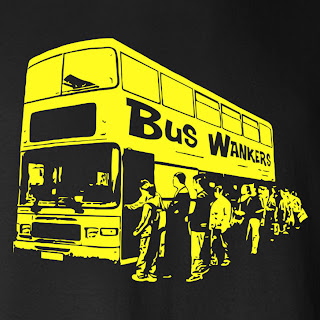 You can even buy t-shirts with it on...

But without exception, on the occasions I've heard it said, the context is completely wrong. Jay was in a car; he was (in his own eyes) upwardly mobile, not having to rely on public transport to undertake a journey he'd hitherto done by bus. Yet in the real world, it's shouted at buses and their passengers by people who can't afford the bus and are having to walk home from school/into the town centre to go to the pub.

Although I'm sure the chance to shout 'w*nkers' at a load of people on a bus is too good an opportunity to miss, for some people.

In the episode which gave birth to the term, to show the hierarchy between car passenger and bus passenger isn't quite what it seems, while the traffic lights were on red, two of the 'bus w*nkers' - both being built like brick outhouses - strolled over to the car and, er, threatened to redress the balance.

Again, the youths shouting out this one-liner today seem oblivious to what happened to their roll model, Jay.

My father would most definitely be put off watching an episode of The Inbetweeners after reading this post; it's not a critique of the show - a very funny and intelligently written 'wordy' comedy and winner of over 10 awards, with a movie released in August 2011 that was the highest-grossing British Comedy of all time.

To see the 21-second clip from The Inbetweeners, click here.
Posted by LEYTR

Even more ironic, I've had it shouted at me whilst bus spotting; from people actually riding on the bus!!