A very nice day was had at the Imperial War Museum, Duxford, Cambs, the other Sunday. It was the annual Showbus Rally, the UK's biggest bus and coach gathering with stalls aplenty. As has become customary (well, last year anyway), below is my take on the gathering with some not-so-standard shots. 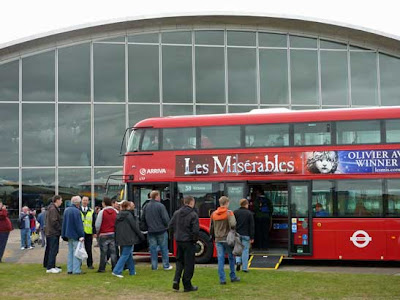 As popular as ever - the New Bus For London, lovingly (?) referred to as the Borismaster by both those in and outwith London. Wherever this integral Wrightbus-designed bus is, a lot of interest is shown. I've ridden on one of the Borismasters once before, in service in London and enjoyed it. Was it better than a Gemini-bodied Volvo? Perhaps a little bit, though much if it was down to the novelty trim and interior design. 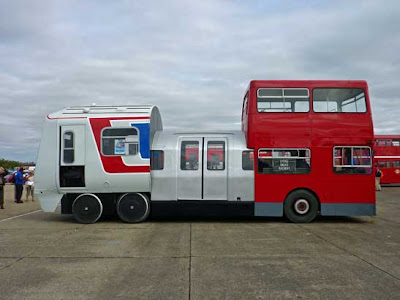 Is it a bus, a Tube or a train? This Daimler DMS conversion was very unusual and was entered by the Epping Ongar Railway. Upon closer inspection, the two train wheels were add-ons, covering the Fleetline's rear wheels. Inside, it was possible to walk from one end to the other. 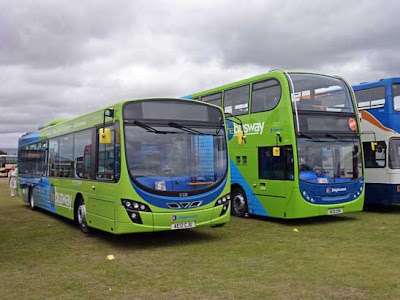 Both types of vehicle Stagecoach East employs on the Cambridgeshire Guided Busway were in attendance. I've made my feelings known before about which I prefer. It is very rare for Stagecoach to purchase the Volvo/Wrightbus combination (left), though I understand this was a personal preference of the company's local MD. It's just a shame he didn't get his way with the double deckers. 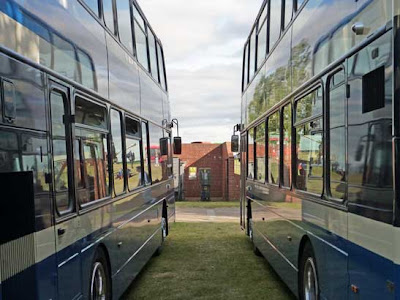 Delaine Buses of Bourne - now England's oldest independent operator following Chambers Coaches being snapped up by the Go-Ahead Group earlier in the year - entered their two newest Volvo/Wrightbus 'deckers and were hopeful of winning the Best Modern Bus award, though rather predictably this went to the Borismaster. 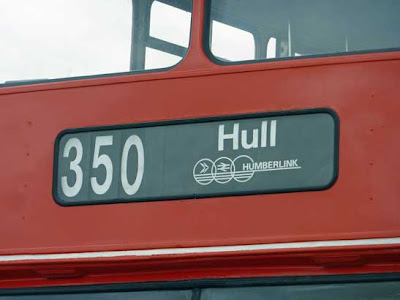 Hull Bus Restorers entered a Bristol VR (WKH 526X) in East Yorkshire's NBC poppy red livery. The destination was of note - Humberlink - the trans-Humber service operated jointly with Lincolnshire (and continues to be so today, albeit with Lincolnshire's reincarnation as Stagecoach). I have a tie with the Humberlink logo on, as depicted below 'Hull'. I don't think I've seen this bus before, which has very strong links to the LEYTR area. 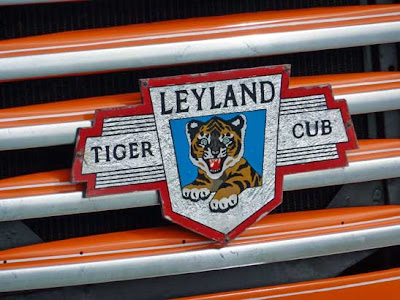 The former British overseas territory of Malta - now a thriving country in its own right - was again represented with one of the country's Leyland Tiger Cubs in the immediately recognisable yellow livery. I took a photo last year so concentrated on this very well turned out badge this year. 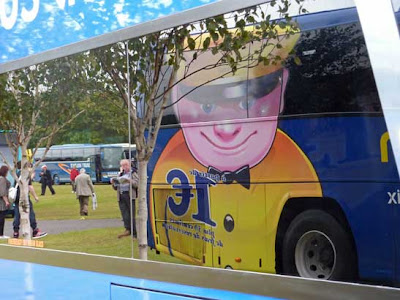 Wow. Megabus brought two coaches and, boy, did they have pride of place. Displayed side-by-side was one of the Rugby-allocated Volvo B9R/Plaxton Panther 2 coaches that operates the UK to Europe services and one of the company's integral Van Hool Astromega TDX25 double-deck coaches. The former's £1 signage can be seen as being €1 in the reflection shot - this being the bargain basement fare offered for those boarding in Paris, Amsterdam or Brussels. 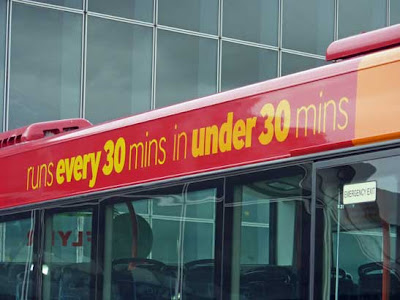 Midland Classic brought one of their Wrightbus-bodied Volvo B7RLEs specially branded for Service X12 (the Burton-Litchfield flyer), yet the branding above the windows doesn't actually make sense (though I can guess what it probably means). 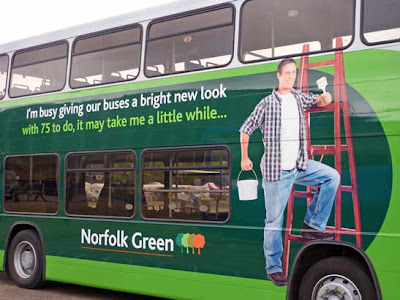 King's Lynn-based Norfolk Green operates one of Lincolnshire County Council's flagship InterConnect services, between their home town and Spalding. The company has purchased two new ADL Trident 2s with the ADL Enviro400 body and one is allocated to this service. The company is also introducing a new livery and is in the process of applying this to its fleet - and has even designed a special branding to show this. 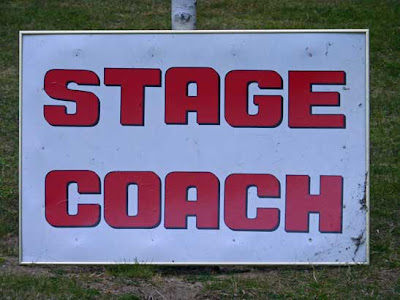 A very early Stagecoach board - the original font style the company's name was shown on their buses and coaches - was placed next to the Megabus coaches, complete with its cobwebs (to the bottom right). 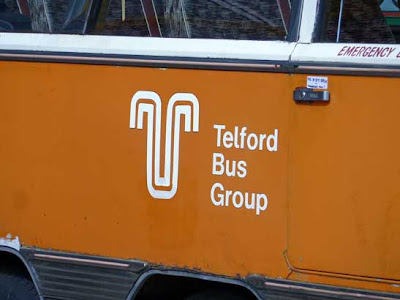 I very much enjoyed what the Telford Bus Group has done to this Greater Manchester PTE logo. By cutting the stems off, the M has sort of become a T. 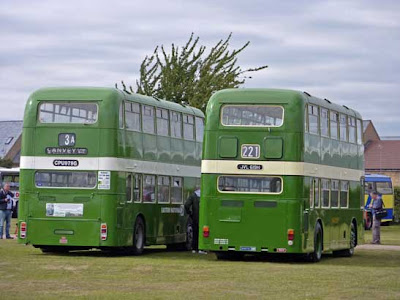 There aren't many Mk1 Bristol VRs in preservation nowadays, but two were parked together at Showbus. The one on the right is former Lincolnshire Road Car 1904 (JVL 619H), preserved by LEYTR Treasurer Richard Belton. The one on the left is former Eastern National 3000 (CPU 979G), entered by the Blackwater Preservation Group.

Hi
Its a nice piece of information, it will really helpful for the people who are planning to invest in transport business.Generally people face lot of problems while shifting their home or office. Its really a difficult task.For all those who hate wasting time in shifting, man and van is for you.They provide you man and van services for shifting in all over UK.

I have My own tool box and lot of years experience in flat pack.

Plus if you need to help with Painting your flat or house i can do on fix quote.

First time comes to such service, that give this kind of services. Thanks for sharing the information.Thank you for sharing such relevant topic with us. I really love all the great stuff you provide.Thanks again and keep it coming.Using a Man and Van is probably the most appropriate moving service for people who prefere a hassle free, smooth move but have a strict budget or just someone who whishes to go the pay per use way.
Man and Van Croydon

If you want a cab this is a must visit blog for you!!
Late night cabs hire


When will you be doing another article on this subject?

Amela
Oakley man with a van

Hi my is name sujit, My group have used packers and movers on several of dealings and have been very satisfied with the effective Packers and movers in Kapurthala helpful support, despite challenging pick-up conditions at business exhibitions. I’ll definitely be using yourpackersmovers.org solutions all over again in the future .

It has a great look because sometimes it looks like a bus or sometime a train by its nice shape. Travellers would like to travel in this nice bus. cheap airport parking