A few years ago, following the advice of rail fares expert Barry Doe, I paid for a CD that contained the entire collection of rail fares on offer at that time. The theory was to check the fares first and purchase a ticket accordingly. So often it's the other way round. Novice users of the rail network input start and end points, a time of day and a date and choose accordingly. I've always felt they'd be better informed if they saw all the different tickets on offer first (and who much they cost) and possibly choose a ticket that conforms to their requirements, rather than the train departure time.

Well now, thanks to a link offered by Barry Doe in a recent RAIL magazine (he also mentioned the website from Sunday I showcased, though I hadn't spotted it at the time!) you can do this for nothing. No CD required, it's all online for anyone to access for free.

http://brfares.com essentially allows you to check the fares first for your journey, whether it involves a change or not. But beware, it gets a little complicated (not that you'd expect anything other from the UK rail fares)!

As with Sunday's example, I used Cleethorpes to Sheffield, which is input at the top of the landing page, which doesn't look as simple or professional as trains.im, though what the results show is completely different! Click 'query fares' and every single fare between the two locations is shown, with First Class fares at the top. There aren't as many as you'd think and even fewer than shown as many of the advance fares are special offers that First TransPennine Express has offered in the past year.

Clicking on the ticket name offers the restrictions place on it so you can see what you can and can't do with it. I chose to look at SVR OFF-PEAK R which I know to be an Off-peak Return, though would the casual user? Costing only £5.90 more than its standard return equivalent, this is a good example of how the casual user who's willing to click on both ticket descriptions to read the differences can see that for less than six quid, the standard return offers a break in journey on both outward and return legs. 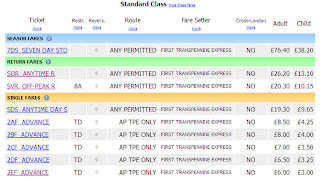 The cheapest fare offered between the two locations is £6.00 and called 2EF ADVANCE in the single fares section. This appears to be one of the advance fares TPE offers for those savvy enough to book 12 weeks in advance or to travel on less used services by booking a few days/weeks beforehand. You can't walk up to a booking office the day before travel and expect a single for £6.00, but this isn't made clear. Rather than it being the fault of the website, it's because the official conditions have simply been copied and pasted from the national fares guide, which aren't as explanatory as they really ought to be.

But this is only part of the website (and part of the results that are returned). If you feel like blowing your mind, click on 'expert mode' at the top and this is where the casual user will leave and the enthusiast stay.

Flow origins and flow destinations are shown for the entire journey, producing a large number of results for journeys requiring multiple changes. Cleethorpes forms part of Flow Origin Q275 along with all neighbouring stations and those along the Barton Branch. Sheffield is in Flow Destination Q480 along with its neighbouring stations. Below this, you can see who sets the fare in question. There are some oddities here as a number of key flows throughout Britain have fares set by train operating companies who are the minor service provider, yet their prices and specific conditions apply. 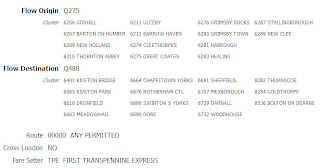 The fares are then shown at the bottom, in similar fashion to the non-expert mode version.

I also enjoy First Class fares being shown first in the fares results as it offers greater prominence to the fare class and it's these fares that bring more money into the railways, enabling more money to be spent on the system (after various shareholders have been satisfied).

As with Sunday's website review, I've been playing away for hours, looking for many different journeys that can be made. You may recall the most expensive journey by rail being revealed as costing more than a grand a couple of years ago, for a First Anytime Return between Newquay and Kyle of Lochalsh. Using brfares.com you can see this reduced rather significantly to £738 via London (fare set by East Coast) or an even cheaper £640 not via London (set by CrossCountry). It was the latter fare that cost £1,002. The cheapest fare is a BRS ADVANCE costing £58 single, though its description says it's only valid on National Express East Coast, so it's not been available for a number of years!

Using trains.im you can check out all the intermediate timings, though you'd need to look up each section separately as that site only details direct trains. I would suggest Newquay-Par, Par-Bristol Temple Meads, Bristol TM-Edinburgh, Edinburgh-Inverness, Inverness-Kyle of Lochalsh. There'd be quite a few pages of timings to print out I suspect. Other ways include using the sleeper services, but that would push the price up as you're travelling via London and you would probably want a berth to sleep in.

Still, hours of online tinkering that up to a few days ago I didn't know existed.
Posted by LEYTR

Many thanks for the nice comments about the site. The "messiness" of the homepage was a valid point - has been taken on board and since the last update the homepage is now more colourful and less cluttered. I hope it makes the site more enticing to use!


Thank you for sharing your thoughts. I truly appreciate your effort in sharing this informative articles. Very impressive and quite interesting for the readers. Good job.