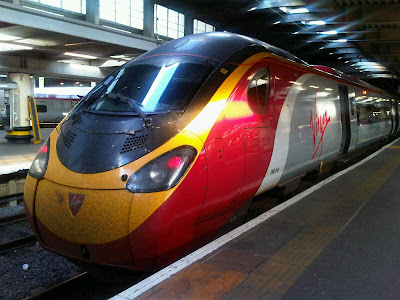 After an early morning in London - so early that we missed out all-inclusive breakfast at the LSE's Carr-Saunders Hall - we caught Virgin Trains' first departure of the day from Euston at 0810. We left from the same platform that we arrived from yesterday (13), though the Pendolino was different, 390041. It was a very enjoyable run along the increasingly familiar West Coast Main Line. An additional 15 minutes running time has been added to the journey on Sundays, in case engineering work forces it to operate via Northampton, so we flew through Rugby 15 minutes ahead of time. Our guard apologised for us being held south of Stafford and that "it would not have an adverse effect on our journey time". He seemed like a great guy (called Steven), with the voice a cross between 'Brother' Crow and Ray Winston.

We had a quick look around Virgin's refurbished Cheshire Lounge at Crewe station. Very nice it was too. It was a little odd having to show our tickets to a camera before being allowed access though. 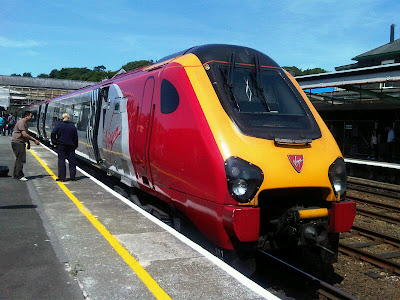 Next it was to Platform 12 for a Virgin Voyager - 221113 Sir Walter Raleigh - where we caught the 1042 service bound for Holyhead, though we bailed out at Bangor. On board, the train was very full indeed when we left, even more so at Chester. It was a very pleasant journey along the North Wales coast. A chat with the Holyhead-based guard (who relieved a Scots chap at Chester) was interesting; she was telling us that she sees a fair amount of variation, with duties that take her to London. 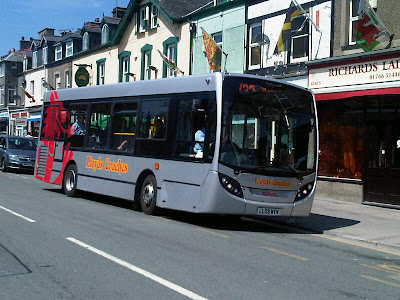 Bangor was the location of our first (and penultimate) journey by bus during our trip. Service X32 forms part of the TrawsCambria network and operates between Holyhead-Aberystwyth, though our Sunday journey commenced at Bangor and was operated by Lloyds Coaches. They used LL09 WYN, an ADL Dart/Enviro200 B29F. It was the sort of journey that despite the light loadings, is difficult to keep to time on. We ran a few minutes late throughout and at one time clocked our bus doing its top speed of 57mph along the A487. 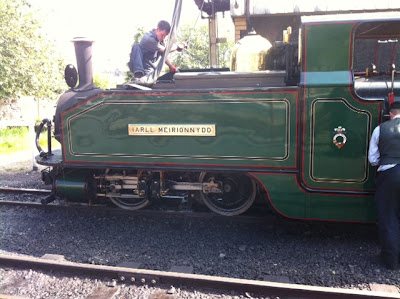 Arriving a few minutes late in Porthmadog, we meandered to the Ffestiniog Railway station. It was 1435 and our train wasn't due to depart until 1600. Much to our surprise, an additional departure at 1500 was now scheduled as today's timetable had been disrupted as the result of a lineside fire earlier. Our First Class All-line Rovers were valid in the First Class section at the rear of our train (we checked first), so we sat an enjoyed our wonderful 13.5-mile journey into Snowdonia. Our train was hauled by Iarll Meirionnydd/Fairlie's Patent.

The guard commented that he'd never seen First Class All-line Rovers before in his 10 years at the company yet today we were the second to present them to him. 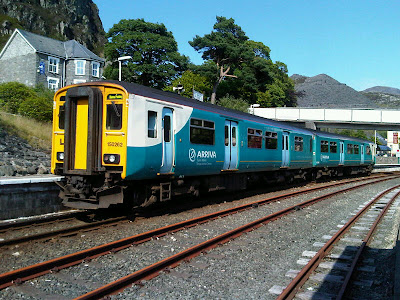 Our connection at Blaenau Ffestiniog was to be 0:10, but thanks to our bespoke journey from Porthmadog we now had a much more comfortable 1:10. Arriva Trains Wales provided 150262 on their last departure of the day from there at 1730. Whether it is supposed to await the arrival of the Ffestiniog Railway's 1720 arrival or not, we did not know, but were glad we didn't have to find out.

The Ffestiniog Tunnel is one of the first things travellers on the Conwy Valley Line will notice as they leave Blaenau Ffestiniog. At 3522m/3853yds I believe it is the longest tunnel on a single-track line. The train was lightly loaded though at Llanwrst a number of people who had been re-enacting in a field somewhere boarded - their spears and chain mail appeared to weigh them down on this very humid summer's afternoon. 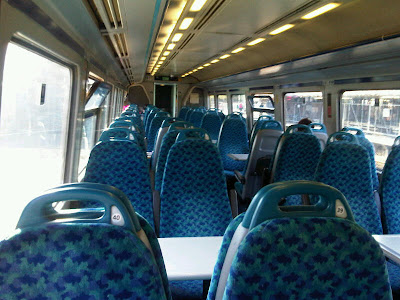 We arrived a couple of minutes early at Llandudno Junction, so we were, for the first time, able to catch a train that wasn't in our official itinerary: Arriva Trains Wales' 1827 train to Holyhead. We'd been booked on the 1924 as we weren't due in until 1829.

Our conductor Joe was very courteous and chatted for some time. He was a bastion of his profession, pointing out places of interest on route, from Snowdon to the barracks where Prince Harry is based. He also gave us some insider information regarding the first train of the day tomorrow. It's an early start so I shall retire to watch Top Gear.

Upon our return we shall provide a number of blog entries with images of the 2011 LEYTR Railrover, including facts and figures.
Posted by LEYTR

Service X32 never starts from Holyhead. Bangor to Aberystwyth are it's outer extremities. I think you're thinking of the old 701 Holyhead to Bristol service which ceased about 10 years ago.

You're quite right. The first Sunday departure commences before Bangor Bus Station, according to the timetable, but on closer inspection this is misleading as it is nothing less more than a loop from Penygroes.