Greetings from aboard Virgin Trains' 390006 Tate Liverpool, as we head south along the West Coast Main Line. The daily blog entries will consist of a number of photos taken during the day with some comments beneath each - this being the first of the 2011 LEYTR Railrover. 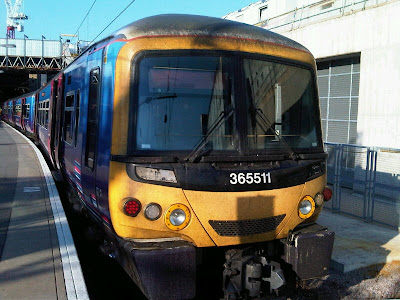 My first trip was from Peterborough to London King's Cross aboard First Capital Connect's 0546 departure. 1P61 was formed by two four-car Class 365s, with 365528 leading and 365511 trailing, though I sat in the latter - in the first class compartment. The Revenue Protection Officer's words when he clocked my All-lines Railrover was: "We don't see many of those!" 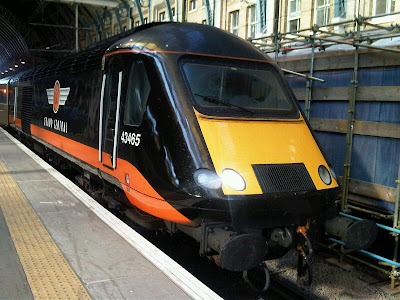 In London we boarded the exceedingly busy 1N20, Grand Central's first Sunderland service of the day at 0747. When I say it was busy, it left The Cross full and standing. The guard declassified first class so plenty of people entered. Complimentary refreshments were still offered upon production of our ticket and we had to go to the buffet. Neither m'colleague nor I had ever travelled with Grand Central before and it was a very pleasant experience. There does, however, appear to be ridiculous amounts of time for stations north of York. We waited on numerous occasions at Northallerton and Eaglescliffe. Outside Hartlepool we arrived so early an announcement was made to say we wouldn't be allowed in until our booked arrival time. Even then we had a further 7 minutes to dwell.

So any claim that Grand Central is feeling an adverse effect on its Sunderland-London journey time as a result of East Coast's new ECML timetable is a little off-the-mark as they could take out at least 10 mins between Sunderland and York. The only other niggle I had is that seat reservations were not put out as (and I quote): the train arrived late into King's Cross last night. 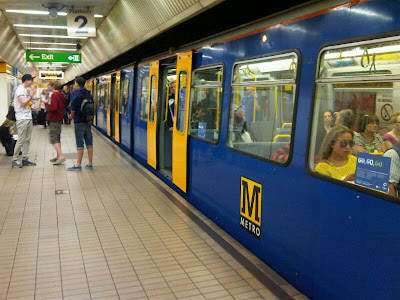 We had to purchase a single ticket on the Tyne & Wear Metro. We would be passing through three zones so the fare to Central Station, Newcastle, was £3. Sunderland is a very convenient place to interchange as the Metro uses Network Rail infrastructure. Our train was the 1159 and was formed of 4054 (leading) and 4082. A very enjoyable journey and, as with all journeys so far, bang on time. German efficiency even... 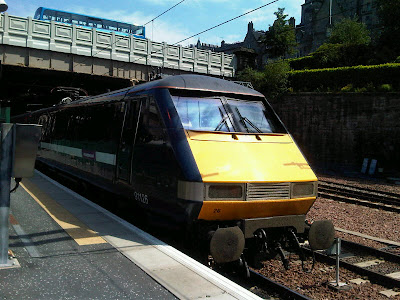 Not long before East Coast's 91126 arrived at Newcastle platform 2, working 1S10. It arrived a little ahead of its booked time (1238) and we left spot on at 1240. A nice scenic run up the northern end of the ECML, with lovely views of the North Sea and the viaduct immediately before Berwick. And before that the tightest curve on the line at Morpeth. 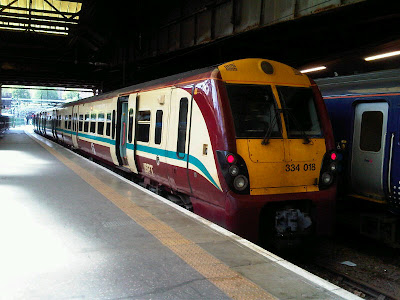 We arrived into Edinburgh 7 minutes early on platform 11 and luckily we didn't have far to go as our ScotRail service to Glasgow Queen Street (then Milngavie) left from 12 - and it was in. Some nice shots of 334018, before it left at 1437, working 2M29 via the new Bathgate-Airdrie link that was re-opened on 12 December last year. It's a pretty nondescript line though - the scenery is nice enough but nothing spectacular - a bit like the Strathclyde Passenger Transport livery First applies to its trains; they don't do the units justice.

In Glasgow it is only two blocks to the hive of activity that is the Buchanan Street Bus Station, so we headed there for a quarter of an hour for some photos. Park's of Hamilton was working a private hire to the Rhineland using a Plaxton Elite. The Citylink Gold colour scheme really is very impressive. 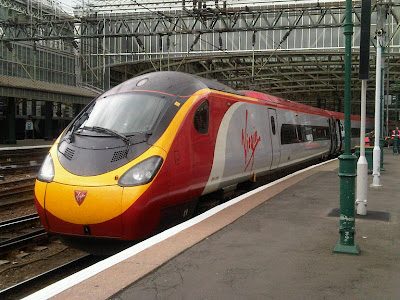 A wander to Glasgow Central and we jumped aboard the 1640 Virgin Trains service to London Euston. 1M17 was formed by 390006 Tate Liverpool and we currently have the entirety of Coach K to ourselves. Just this one journey would cost £207.50 (First Anytime Single, Glasgow-London).

We're staying in London overnight and heading out first thing to North Wales. I'm sure we'll both sleep well!
Posted by LEYTR

Grand Central would love to speed up their journey times. It is not their choice to waste time between York and Sunderland. Rather it is a function of their trains being "last on the graph" and having to be slotted between various stopping trains and freights that have prior rights to their paths.