A date has been set for the opening of the Cambridgeshire Guided Busway - 7 August 2011, following a delay of over two years.

Spring 2009 was originally planned but at last minute this was delayed until the summer of that year. This was soon put back again when the summer of 2009 arrived. Actually, the opening date wasn't just put back, it was postponed with no estimation given, owing to the work needed doing being so substantial.

The following February, it was revealed that BAM Nuttall, the Busway constructor, was being fined by Cambs CC £14k for each and every day that the scheme overran - at that time this amounted to 335 days, or a cool £4.7 million.

Flooding was seen as being the main problem faced by the contractor, while soil shrinkage in parts was causing concern for the County Council who believed this could force the Busway's road surface to fracture. 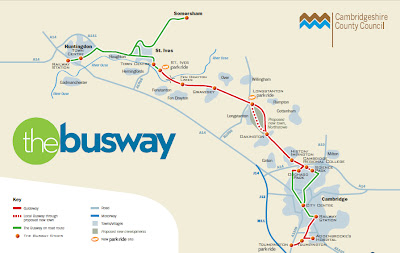 It has been an unmitigated disaster and has served to air caution on other local authorities who are contemplating a similar scheme. Rather than refer to the Cambs Guided Busway as the beacon, and how best to emulate it, it is seen as the problem child and visits to Longstanton and Swavesey by council officials from elsewhere are being undertaken to learn lessons of how not to construct theirs.

The sooner this former railway trackbed opens and buses begin running the better. It will be many years before the Busway is free from its problem start. Its saving grace, however, is the massive time savings those using the special buses purchased for the scheme (though all must have undergone two MOTs by now!). Anyone who has to commute along the A14 between Huntingdon, St. Ives and Cambridge will know what a huge difference the Busway will made to their lives.

SLOWER, and less convenient than the GER train in 1922!

Why (oh why oh why) did DafT insist on this abortion, other than a visceral hatred of railways?

Agreed - and the much-quoted fact that the cost to convert to Busway is greater than laying down tracks to allow trains to run. Though there is an element of convenience that cannot be ignored: trains would not (and indeed did not) operate to the frequencies the buses will and nor did they serve the town centres and Cambridge city centre as closely as the buses can.

The shine has definitely been taken off what is reported to be the world's longest guided busway, that's for sure.

Trains can and do run at 10-minute intervals - frequently enough that remembering the timetable is unnecessary - if the will is there. The width of a double-track railway can't possibly be more than the width of a two-way busway, and each train would carry more passengers than each bus.

There was *already* a railway in place before the busway replaced it, and this would just have needed upgrading a little to support passenger traffic. The opportunity has also been lost to reopen a rail link between Oxford and Cambridge that avoids London.

I sincerely hope that governments everywhere observe this debacle and decide against busways whenever a railway on the same route is feasible.

Whilst the construction of this busway has been a fiasco (though possibly less so than the Edinburgh tramway) lets see how it works before passing judgement.

It appears that some of you have not got an idea of the cost of reinstating railways!!

An approx cost of £1.25 million a mile, if it is electrified add another million per mile. Then you need to factor in the cost of signalling and stations, a station alone is another £1 million for a bog standard design with bus shelter.

Then we have to factor in the cost of new trains to run the service, as there is no available rolling stock to operate a 10 minute interval service, we're looking at £4 million per train, multiply that by 6 to get your 10 minute service. In Wales with a recent train line extension wild reptiles had to be moved from the future station site at the cost of £1.5 million. Lets not forget that rail projects tend to go over budget also ( add an amount you like and it will still cost more than the bus way!!)

The above are precisely why a bus way was constructed and not a railway. It was bound to have teething troubles, its a new thing and any new thing will have design flaws that needed to be rectified. Perhaps the council should have chosen a different civil engineering company.

There is a definite school of thought which suggests that cost estimates of that order are grossly inflated, possibly even deliberately so, which is known to discourage reinstatement and new-build schemes. Certainly it seems unlikely that the average preserved railway would be able to operate at anywhere near those cost levels, and yet they seem to manage.

As I mentioned, there was already a single-track railway in place, before it was ripped up to make way for the new order. It had been used successfully by heavy freight wagons until relatively recently. Passenger trains are relatively lightweight and therefore much easier to maintain track for.

The formation has had to be widened anyway to accommodate the heavy and complex concrete "track" for the buses, so that was not a factor limiting the possibility of making it double-track. There would be no immediate need for electrification or tunneling, and most of the signalling required would be bog-standard three-aspect automatic signals placed at regular intervals along the line.

This is not rocket science these days. Buses can only reach 60mph in exceptional circumstances, but it is basic routine for trains.

As for the trains... these are leased these days, didn't you know that? The up-front costs are not borne by the operating company. Surely there are some spare DMUs lying around somewhere to get things started, even if that's on a half-hourly service and a little bit tatty. On modern continuously-welded rail, even the awful Pacer would be more comfortable than a bus.

Perhaps the only disadvantage of rail is that it can't go straight through the middle of a historic city. That's okay, just send it through the outskirts instead, and if necessary set up some connecting buses - you know, with timetables that actually match the train ones so that commuters can walk off the platform and into a bus without waiting.

Contrast that with the major project going on over here, in a big country with a little population of 5 million or so, where a double-track electrified railway with major tunneling works is being built to connect the local airport to the city. The service frequency will be ten minutes each way throughout daylight hours - as it already is on the existing lines that it will extend and join.

Thirty-odd new trains have already been ordered to run the line, and six of them have already arrived and are being run-in on everyday services (relieving the load on older trains). A busway wasn't even considered - if it had, it would have been laughed out of the room before the day was done. We already have the nearest equivalent to a busway from the airport to the city centre - it's called a motorway.

All of this is being funded jointly by the two municipalities the line serves, and the work is being done by the state railway operator. The only major snag they've encountered so far is a de-icer leak from the airport above the tunnel - that will put them over budget, but they're trying to get the airport to pay for the problem since they caused it.

Simultaneously, a double-track, electrified, *automated* metro line is being built - in tunnel - on the other side of the city, extending into a third municipality. No major problems so far, and AFAIK it is on budget. The service frequency will be much higher than the surface railway - I hear that they're shooting for every 2 minutes in the peak. The existing metro (not automated) achieves 4 minute intervals at peak, 5 minutes off-peak.

This is on top of the new, high-speed, international service which started a few months ago, and for which a new high-speed railway shortcut - double track, electrified, 125+ mph - was built starting about 40 miles from the capital. As more of the new-type trains and qualified drivers become available, the older, slower international trains will be retired.

As I mentioned, this is in a country with a population of only 5 million or so. Where on earth do we find the money?

Trains do run at 10 min intervals but would never do so between Cambridge and Huntingdon as the population from which to draw is so small.

The cost of reinstating the railway and taking your numbers:
Length Cambridge to St Ives 40m at £1.25m + £1m per mile for electrification supply = £56m, Say 10 stations at £1m and 6 trains at $4m each gives a grand total of £90m against a guided bussway currently quoted cost of £181m. Note the council is budgeting £1m per year for mainteance of the bussway.