The only bus route none of us had done (as we'd not had chance last year) was a trip to Moorish Castle using Gibraltar Bus Service's route 2. Last year, Toyota Hiace people carriers were used, though this year a couple of new-looking Unvi-bodied Mercedes-Benz minibuses were deployed. They carry 15 passengers and the rear section is for a wheelchair user, with its own dedicated door. 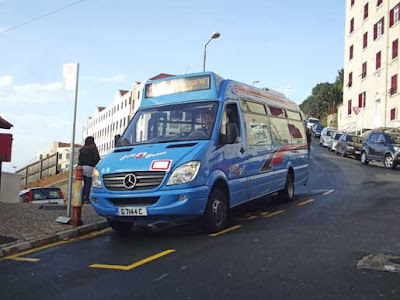 And what a route this vehicle took! Moorish Castle is clearly visible from the city centre so we knew we'd be heading uphill, but the journey was hair-raising to say the least. The clearances on both sides were down to inches in many places, yet the plucky driver continued apace. Just when you thought a turn couldn't get any sharper, the bus came across one even worse; when you thought the gap between the house on the left and the parked cars on the right couldn't get any narrower, it did. There are a good deal of one-way streets in this area, for very good reason indeed! The terminus is on Willis's Road, just down from the castle, and we congratulated the driver before heading off to see what the view was like from part-way up the Rock. 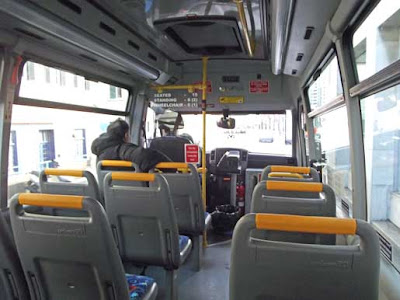 I tried my panorama setting out on my camera to good effect here. The rain had stopped, too. Umbrellas were no longer needed. We had a 40-minute window to take pictures from this excellent vantage point and reflect on the journey up here.

Click to enlarge
The journey back, while having gravity on our side, was no less surprising. At one point, the road was so narrow that the window shutters of residential properties had to be negotiated very carefully to prevent them from being ripped off their hinges. The return route is slightly different to that of the outward as the Flat Bastion area is served. When we joined the main Europa Road, which was like the M1 Motorway in comparison, the turn was so tight and the camber so adverse that the rear of the minibus actually grounded. This was of no surprise to our driver who slowed down immediately before the metal-on-concrete sound was heard. 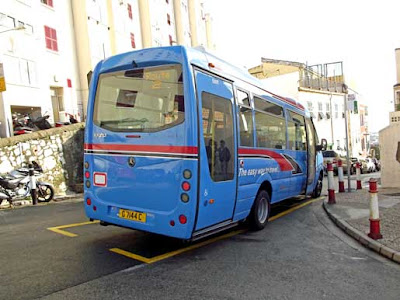 We alighted in the city centre at the route's terminus and headed back into town for an evening meal of local cuisine in Pizza Hut (where unlimited refills on soft drinks does not apply!). Throughout both our visits to Gibraltar, no mention of a service charge has been made on our bills - be our meal in a traditional restaurant or one of the larger chains. Not even a suggestion is made at the foot of the bill, nor are 'tips' jars left visible. I know us Brits aren't known for our generosity in this way when holidaying abroad (though arguably with good reason) so it is something that I've always noticed. 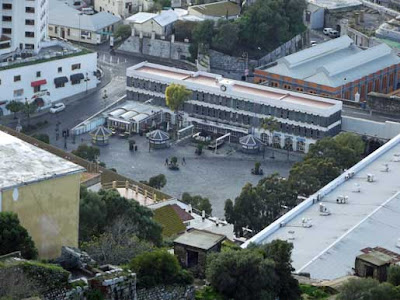 Casemates Square - the social hub of Gibraltar's tourism. It has been kitted out for much warmer climes than those to which we were subjected this weekend!
There'd been a Premiership football match on this afternoon and the two main pubs in Casemates Square (the focal point for tourists) were full of very drunken Englishmen. In one establishment vomit was clearly visible on the floor. Yes, it felt like home now, yet door staff were not in evidence at all. No blood was shed either. Smoking is still permitted within pubs in Gibraltar, in stark contrast to Spanish law as well as that here in Blighty. I always view a law as being worthwhile when you become completely unaware that it is in force until you go elsewhere and realise how much you've unwittingly benefited. The UK's strict no smoking legislation is one such beneficial law (for me, anyway). 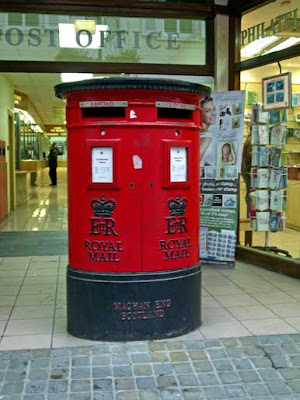 Plenty of familiar sights in Gibraltar
Sunday night in Gibraltar was like the flip side of Nottingham, where men strongly outnumbered women by at least 3:1. Both pubs had either a disco or a singer on and the drunken lads seemed to be lapping it up. We, on the other hand, had to fly back in the morning so had a wander around the Old Town area. Although the temperature was a measly 14C, it felt far warmer than the same value back home. We didn't see any further bus services operate, as last departures are disappointingly early: 2100, 7 days a week. 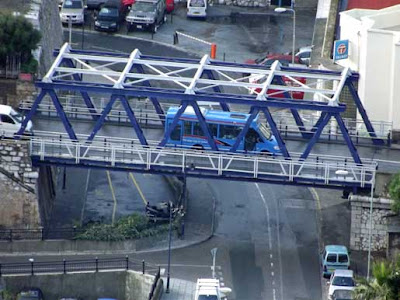 Taken from Moorish Castle, the Unvi-bodied Merc used on Service 2 all day can be seen crossing Corral Road using the bridge on Smith Dorrien Avenue
Monday dawned and we headed straight for the airport after our breakfast. Again, no public transport required as the walk took all of 15 minutes. Gibraltar's airport was heaving, though. Not only was our 1110 departure to Gatwick due, but two Monarch Airlines flights to Luton and Manchester were due within the space of 5 minutes of each other, 50 minutes after ours had departed.

The wind had subsided and our flight was shown as punctual. We initially joined a ridiculously long queue for security, but a local worker called easyJet passengers forward into a dedicated queue, away from those queuing for both Monarch flights. The departure lounge, which most definitely will benefit from becoming larger when the new terminal opens, was full and the queue for the departure gate snaked half-way round the room!

Click to enlarge.
Panorama shot from my new camera. easyJet's airbuses aren't the most luxurious of planes, but for a 2.5-hour trip they're more than adequate.
On my easyJet boarding pass, no mention of a passport is made. That is, only photo ID is required for the flight I was about to make. As my boarding pass and passport were being checked, I asked the security man whether or not my UK driving licence - endorsed with the EU flag - would be acceptable as it bares my image. He said not and that only "authorised" photo ID is accepted, but didn't go on to state what exactly that is. As one of our party later said: "If your UK driving licence isn't authorised, what is?"

Unusually, we were one of the last to board the plane and I assumed that we would not be able to sit together, though fortunately this was not the case and a central row of three seats presented themselves. I videoed us taxi across Winston Churchill Avenue, though haven't uploaded that to YouTube since the shot from the road itself far better demonstrates this, though have uploaded the U-turn our Airbus A319 made at the western end of the runway, with the bay on all three sides.

And of course the take-off itself.

The captain gave us plenty of information throughout the flight and one of the most interesting was to be able to catch a glimpse of Jersey around 35,000 feet below. I know its not exactly Australia, but I always imagined Jersey to be larger than it appeared from this height. 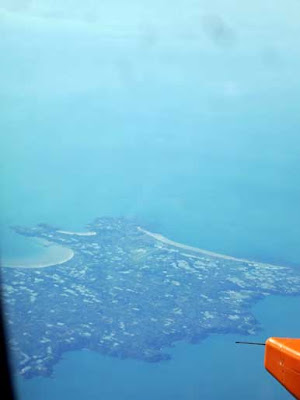 We touched down in Gatwick a few minutes ahead of time, though at the South Terminal, so it was down to National Express-owned Airlinks to transfer us to the North Terminal. The bus of choice was in evidence again - the Cobus 2700 was used and it was in much better condition than those used in Gibraltar, where masking tape holds bumpers and body parts together! 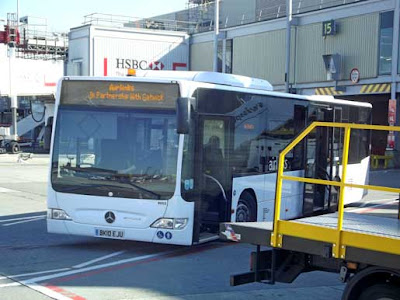 We didn't travel on a Merc to the North Terminal. Airlinks has a very impressive fleet of nearly-new Citaros.
We were waiting only 2-3 minutes for our 'bus' at the courtesy 'coach' pick-up point and headed back to the Flightpath car park.

I headed to the customer service building at the car park and witnessed a queue longer than that for check-in!! Luckily, my problem was easily remedied. We'd discussed this problem at a recent LEYTR committee meeting, would you believe. The automatic number plate recognition (ANPR) equipment used by these parking companies struggles to differentiate a '4' from an 'A' when it is the last digit. My car registration ends in '4', yet the ANPR believed this to be an 'A'. Next time I may consider deliberately changing it to end in 'A' when booking online....

Yet another excellent long weekend in one of the UK's most high-profile colonies. Colonialism is clearly in evidence to a massive extent, though not so much to drown Gibraltar of its individualism. Seeing a palm tree outside the Norwich & Peterborough Building Society is one such facet that always brings a smile to my face. Our plan is, should we visit again, to fly there during late-summer as Gibraltar most certainly has much more to offer when the sun comes out. Many summer months see no precipitation at all, making for quite an arid climate. 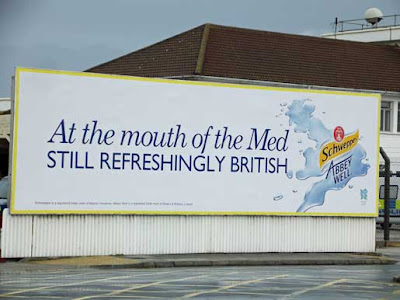 The colony's public transport network is absolutely superb, with all populated areas served in all terrain! The Gibraltar Bus Company's fleet of Dennis Dart/Caetano Nimbus low-floor midi buses and their new Mercedes-Benz/Unvi accessible minibuses look resplendent and are immaculately turned out, both inside and out. For value, the fares charged rival those on offer in any town or city here in the UK. 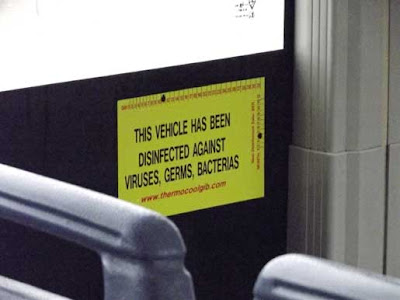 We mustn't forget easyJet, either. Our flights cost just £44 return each - the return leg was just £14.99. We had no hold luggage so only incurred the debit card payment fee (none of us possess a Visa Electron, the only card not to incur the fee). Personally, flights to/from Stansted Airport would be more convenient than Gatwick, though Monarch fly from Luton and Manchester airports and there's always BA to consider, too. None offer flights as low as easyJet - no matter what your opinion of them. 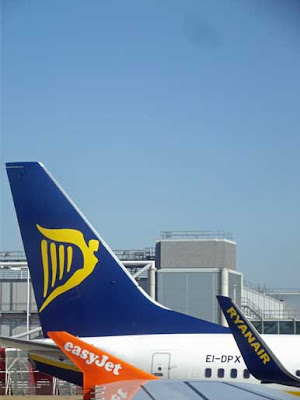 They're a bit like Marmite: you either love them or loathe them.
The entire three days - petrol to the airport, parking, flights, accommodation and breakfast - totalled £125.05. It costs more for a First Class single on East Coast's London-Leeds train service when purchasing your ticket on the day of travel. There is no need to convert any money so, importantly, travel agents make no commission and sudden financial downturns do not have a negative impact on exchange rates, with the Gibraltan Pound being accepted on a like-for-like basis with Sterling.

Excellent and interesting report.
Thank you.
I do hope, though, that your UK driving licence doesn't "bare" your image, even if it is endorsed with the EU flag!!
[pedant mode now off]