Contributing writer 'DB' offers the following, to mark a milestone in rail travel around the Capital - literally.
Today saw the opening of Phase 1A - the extension of the East London Line from Dalston Junction to Highbury & Islington. Thus it will be possible to complete an outer orbital route of London without having to leave the rail network, albeit not yet on the same train. From Highbury & Islington you would take a London Ovevrground train to Clapham Junction over the North London Line, changing there for a Southern service to Victoria. Alighting at Crystal Palace, you would then change for another London Overground service to take you back to Highbury & Islngton.

On the North London Line, frequency is typically around 8 trains per hour (tph) - alternately serving Clapham Junction and Richmond. Southern's Victoria to London Bridge service via Crystal Palace is 4 tph. And finally London Overground from Crystal Palace to Highbury is 4 tph, although staying on the Southern service for one stop more would see 8 tph as trains from West Croydon join the route here.

By December 2012 the extension from Surrey Quays to Clapham Junction will be completed and the whole circuit can be done on London Overground trains, although not the same train throughout. 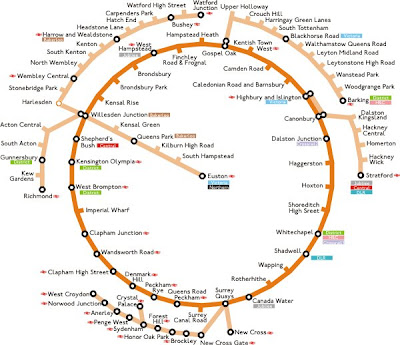 This map includes the proposed extension to between Clapham Junction to Surrey Quays via Peckham Rye. At the moment you would have to go via Crystal Palace.
Click map to enlarge

Sorry to be a pedant, but there need to be a couple of corrections here:

* Table 59 in the National Rail Timetable indicates that the North London Line frequency between Highbury and Willesden is 6 tph in the peak and 4 tph in the off peak.
* Table 176 shows that through trains between Highbury and Clapham J only run in peak hours with about 3 tph.
* In the off peak there are only 2tph between Willesden Junction and Clapham Junction.
* Table 178 shows that Southern's Victoria-London Bridge service has a 2 tph service, though I concede there are an additional 2 tph on the Victoria-West Croydon servcie, but these don't serve Sydenham.
* Finally, once the Surrey Quays to Clapham J Overground service is in place, you will be able to do a complete circuit on Overground, but not the same as that described in the piece via Crystal Palace.

Overall, I'm not quite sure what the point is. Overground is only a particular brand of heavy rail train, although TfL are trying very hard to convince you otherwise. It's been possible to make orbital journeys around London by rail with short wlaking interchanges since the opneing of the DLR and if one is allowed to include a short boat trip (Woolwich Free Ferry) then it was possible for many years.

I think the new extension from Dalston Junction to Highbury has been quite popular. The ELL north of Shoreditch used to be fairly quiet off-peak but now gets a healthy number of passengers.

I think the class 378 trains are awesome but then I am biased as I drive them!

The 378s may be awesome to drive, but having ridden one recently, I got off feeling nauseous and numb due to the sideways seating and its rock-hard quality!!

Yes I don't envy anyone making the full 50 minute journey from Highbury to West Croydon. But you soon get used to the sideways seating and lack of padding. Quite vandal resistant.

I use the London Overground route from Surrey Quays to Whitechapel everyday and have also used it to visit friends in Walthamstow, changing at Highbury and Islington onto the Victoria Line. It's reliable, comfortable and best of all air conditioned! Best thing that has happened to Surrey Quays in a while!