The future of the UK's largest municipal bus operator was confirmed just before Christmas, when councillors in Edinburgh wholeheartedly placed their support for Lothian Buses to remain independent for the foreseeable future. This has thwarted plans to merge Lothian Buses with the city council's tram company, TIE - the combined company would have been named Transport Edinburgh.

Councillors also backed plans to transfer the entire Edinburgh tram project to be managed by their bus company, subject to approval contained in a review that has been commissioned in a year-long review being undertaken at the moment. 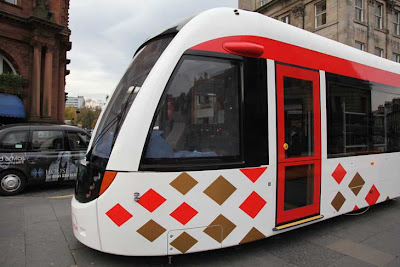 The mock-up that was displayed in Princes Street last year bares the same livery as Lothain Buses so perhaps the transition of power won't be as difficult as councillors think for the public to comprehend
The merger would be the first of its kind in the country, with a bus company having the defining say on the construction of the beleaguered tram network for Edinburgh, not just the operation of the system when complete. Bus companies are no strangers to operating tram systems - or, indeed train companies - with First operating the Croydon Tramlink for TfL; Stagecoach operates Manchester's Metrolink and Sheffield's Supertram, both concessions for their respective Integrated Transport Authorities; Blackpool Transport operates its in-house network at the coastal resort; Nottingham Express Transit is headed by the city's bus company, NCT, in which French transport company Transdev has a 17% stake and National Express manages the Midland Metro on behalf of the West Midlands PTE.

Omitting Blackpool's first-generation system from the equation, no other bus company named above had the sole responsibility for the direction of the second-generation tram system it currently operates. Nottingham City Transport played a significant role in the direction of the NET scheme but nothing on par with that Lothian Buses could have if approval is granted. 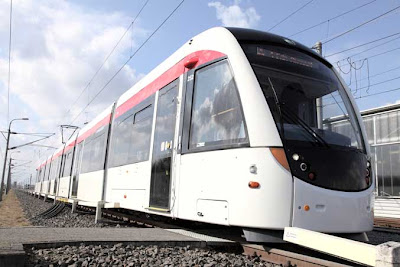 But the euphoria ends there. The Edinburgh tram project is in serious trouble - something even the most optimistic of observers would have to admit. Not only is money in short supply but the political will appears to have all but gone, too. Not even the first phase of the scheme, linking Edinburgh Airport with Newhaven is likely to go ahead in full now, and this despite councillors desperately attempting its revival. What was described in the latest CBW as a 'vital' section between the the waterfront and the city centre may not go ahead due to a lack of funds.

If Lothian Buses is given the task of delivering and then operating the Edinburgh tram system in full, the 'road' ahead is to be very rocky indeed. It may turn out to be a poisoned chalice if not handled properly. Those at the top of the city's owned bus company may well be feeling the pressure right now. You can be rest assured that blame for any shortfall will be placed on the bus company, rather than the local authority. 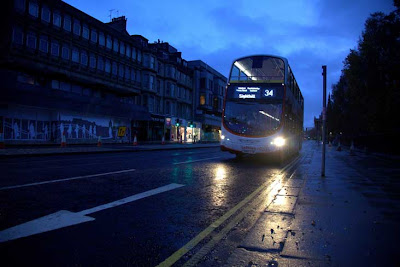 A very rare shot of a quiet Princes Street in Edinburgh city centre. The street had just opened after having been closed to all traffic during the busiest months of the tourist calendar during 2009 while tram lines were laid down
We would suggest Lothian Buses effectively heads back to the drawing board with the scheme, where possible, and re-evaluates what is genuinely likely to be achieved. An updated plan that is genuinely manageable with the funding allowed, even if a shadow of the scheme's former self, will ensure success to be more likely and rewarding and provide a sound base from where extensions to the network could be taken seriously in the future. We would not like to see the company's failure to turn the system around to be seen as a green light for the city council to sell it off!