Never before have we seen so many unfortunate incidents of coaches overturning on our roads. Two weekends ago yet another Oxford Tube Van Hool Astromega double-deck coach overturned as it existed the M40 at J7 and three days ago a Galloway European 60-reg coach, fully laden with elderly passengers, ended up sideways on the tarmac.

There was also an incident of a Megabus coach being involved in a serious incident near Bristol just hours after the Oxford Tube incident. More high-profile cases of recent years have involved National Express coaches, where people have died. Mercifully there have been no fatalities in the above two recent events.

What can you say about these recent overturns that hasn't already been speculated online or in print? Not a lot really. The Police investigations are ongoing and we're both confident that they will find the root cause of both accidents - as was the case with the two NX overturns. The fact that every single incident of a coach overturning over the past five years has involved a vehicle that is, at most, 4 years old is both surprising and alarming. Do the newer vehicles, despite passing their mandatory 'tilt tests', not handle as well as their older counterparts? Or does driver complacency come into play with the manner in which coaches can be driven nowadays being relatively effortless?

Another feature of every overturned coach incident of the past half-decade has been that seatbelts have been fitted throughout. The deaths in the M25/M40 overturn, that saw a double-deck Neoplan Skyliner leave the road as a result of the driver's negligence, were those who were not wearing seatbelts. In fact, many aboard the National Express 592 coach to Aberdeen were not wearing seatbelts and yet NX's work in ensuring its legal obligations to both provide and instruct passengers to wear them were not only being met but considerably improved upon. Drivers, for example, have been told for many years now to inform passengers of their legal obligation to wear a seatbelt. Award-winning information cards exist that state in clear, plain English the legal requirement for belts to be worn. Minimum legislation is for this sign to be displayed per every 2 seats and also at the front of each saloon: 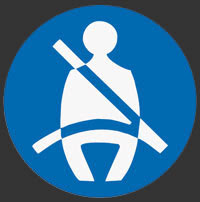 Take the recent Galloway coach overturn. Around 50 people are reported to have been on board and yet there were only a handful of hospital admissions and no fatalities. The coach is understood to have been giving a tour of the Norwich area to a large number of OAPs who are naturally going to be very vulnerable in incidents like this, yet no one died. Sky News reported that Police were putting this down to two things:
Perhaps it's not seen as the 'done thing' by younger people today, but a seatbelt can genuinely save your life, even if the belt appears flimsy and unsubstantial. A three-point belt is going to naturally offer greater protection than a lap belt, but even that will substantially increase your chances of survival than wearing nothing.

Coaches appear very substantial vehicles to many passengers who may feel naturally safe when on board and thus lessen the need for wearing a seatbelt. Passengers may liken travelling by coach to that of a train, which do not feature seatbelts despite travelling at faster speeds, so choose not to wear one. They may also be aware of the fact that coach travel is the safest form of transport on which you can travel in the UK today and so complacency may creep in.

If nothing else, we both hope that the recent incidents will instill a little common sense into coach travellers who habitually choose to disregard the driver's instructions to wear a seatbelt.